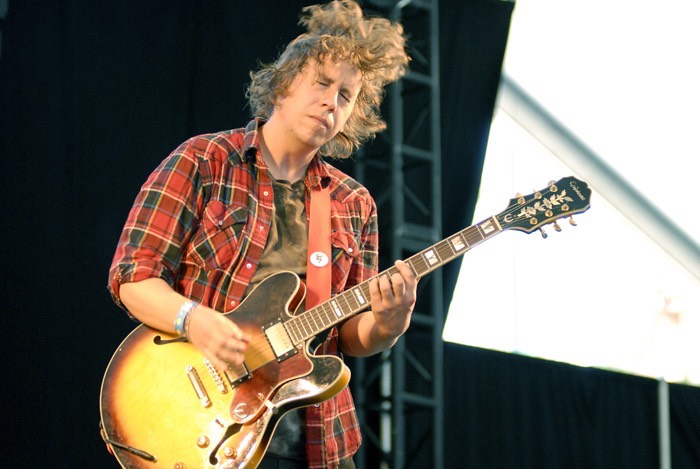 All I’ve got to show from Coachella is a sunburn, a pimple, and a busted bottom lip. While there, I enjoyed: half-assed ass shaking to Crystal Castles, Ting Tings, and Girl Talk; Morrissey looking bloated but still croonin’ like a pro; Paul McCartney singing me to sleep as I lay in my tent; worrying that Ariel Pink was either going to melt or collapse into a pile of dust when exposed to daylight; watching Liars (featuring Alex Myrvold of Pizza!) squirm through my favorite songs while I wondered whether their presence signified a new direction for Coachella (towards an aesthetic I find much more attractive and interesting than that of, say, the stupid Killers) or simply reaffirmed my aforementioned belief that some music is best kept in dark places where sweat is produced via dancing hard as fuck rather than by standing in the fucking sun thinking, “I would be dancing right now if I weren’t sweating my balls off!”

And: I guess I do like that one TV on the Radio song; how gross but totally radical it is that M.I.A. can hop and squat and shimmy and slam like that so soon after popping a baby human out of her vagina? I mean, I hate it when people talk about their babies and how their babies are waiting for them so they can only sing seven songs but I’ll take seven songs and some dumb-ass baby banter if it means I also get amazing glow in the dark costumes and hammer-dancing in front of footage of impoverished Sri Lankan militia men while M.I.A performs effortlessly, barely breaking a sweat—unlike Gwen Stefani who looked like a sweaty bag of shit for several performances after birthing Kingston.

And: the Vivian Girls looking too shampooed to have all that hair in their face and doing absolutely nothing new but making me like them anyway—also a case of No One Dancing until my buddy Jack and I started a water-spitting war and got at least 12 too-skinny kids in short shorts to move, although they were mostly just scurrying away from us but really where’s the line between that and the way hipsters dance, anyway? Plus the Vivian Girls really know how to harmonize and they swapped instruments during a coda without any awkwardness at all, a well-choreographed gimmick that reminded me of how cool I felt the first time I switched drivers going 80 on the freeway but then also how I wondered immediately after, “Why did we just do that?” But then I thought immediately after that: “Sometimes it’s good to do something just for fun, even if it could kill you.” Not that the Vivian Girls switching instruments during a song could kill anyone—the analogy really lies in the doing something just for fun part, because you are young so maybe it’s enough that you are new even if what you’re doing is not.

Also—how No Age has really gotten their shit together. They are now a professional act complete with Scott their very own sound guy (ex-drummer for the Soft Boiled Eggies) and Jim Smith who coolly orchestrated the tech guys to get it all just right so that this show actually did get people bouncing up and down and shoving each other a bit. Plus Chloe Sevigny, one of my first female crushes, was there looking like a fancy rancher’s daughter wearing a white dress that was sort of see through if you stared at it long enough and with her golden locks in a tidy French twist. And: how I can’t help but hum along to that goddamned whistly song by Peter, Bjorn and John.

Finally: how watching X and My Bloody Valentine put into perspective all these kids making noisy pop music by recalling the rich and fabled genealogy of this newfangled uprising and putting a sincere (albeit wrinkled) face on sounds that were once something controversial and that today’s babies take for granted… it must be oddly pleasant to play a show you never would’ve been asked to play in your own heyday, knowing that tropes you helped invent are propelling smooth-skinned foals into stardom from what middle-aged critics are carelessly referring to as the “outside” or the “fringes” while you wonder where the hell that leaves you? But I guess that’s how culture propagates itself and blah-blah-blah babies are gross, even when they are not babies but musical movements.

TIJUANA PANTHERS + NO AGE + THE HURRICANES @ THE REGENT