VOICEsVOICEs: IT’S A BIG EXPERIMENT FOR US

VOICEsVOICEs might be like the middle of every great Led Zeppelin song, or maybe like Yoko Ono played backwards while in a warm cave. Their new EP—produced by Prefuse 73—is out now on Manimal Vinyl. This interview by Scott Schultz. ► 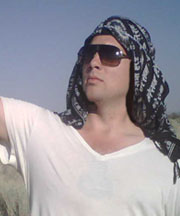 MANIMAL VINYL: IT ALL STARTED ON THE TOILET

Manimal Records owner Paul Beahan is hosting the 2nd annual Manimal Festival today and tomorrow in Joshua Tree with 20 bands including Edward Sharpe and the Magnetic Zeros, Hecuba, Warpaint, Alexandra Hope and many more. Beahan sat down at a French Cafe to discuss Manimal Festival and which KROQ artist he would sign in under a minute. Interview by Scott Schultz. ►

L.A. RECORD is happy to present the debut of the Polyamorous Affair‘s video (Directed by Keith Musil) for “White Hot Magic,” in which even an AK-47 cannot defeat the righteous powers of a witch run over. This is the “dirty version” which features much more… ►