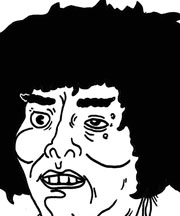 THE HUNCHES: I DON’T SEE TOO MUCH NATURAL SUNLIGHT

The Hunches are doing their last tour—and last show ever—tonight in L.A. They just released their last record a few months back and decided to do a few shows before waving the flag of surrender. Guitarist Chris Gunn recalls the good times and the bad while doing duty in the bowels of a hospital’s basement in San Francisco. This interview by John Henry. ►

They are the neighbors that make noise at all hours of the night and when the cops show up, there is nothing going on and the cops have to apologize. This is a party going on in another dimension peopled by beings with extra limbs and eyes where there shouldn’t be eyes. It’s H.P. Lovecraft getting ripping drunk and wearing a lampshade on his head while a vampire and a mummy are making out in the corner. Yes, you can dance your ass off to this music—just don’t get caught dragging the bodies out the back door. ► 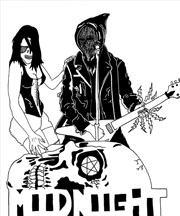 MIDNIGHT: BALD BUT THAT’S NOT BY CHOICE

Satan’s favorite party band is Midnight from Cleveland, who match the best parts of Venom and Motorhead with the sleazy visuals of the Mentors. They’re true members of the new black trash generation of bands—keeping the faith of rock ‘n’ roll metal and forsaking the trappings of over-technical playing and production. This interview by John Henry. ► 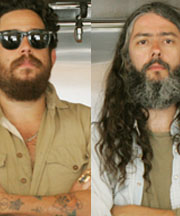 TERRITORY RECORDS: WHERE THE FUCK AM I GOING TO EAT?

Territory BBQ and Records is the new restaurant-slash-record-store from Tony Presedo and Curtis Brown—formerly of Tee Pee Records and the band Bad Wizard, respectively. They will stock heavy music and serve heavy food. This interview by John Henry. ►