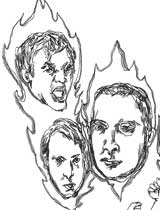 THE SPITS: WE’RE NOT CUTE AND WE PLAY PUNK ROCK

The Spits are one of those bands keeping the planet from collapsing in on itself from pure shame and every self-titled album they have done—which is tons—is full of feral robot punk that will get you demoted at your job if you happen to have a job. They play Friday with Bleached, Clorox Girls and more. Win tickets here or buy 'em here. This reissued interview by the legendary John Henry. ►

SOUL CLAP AND DANCE-OFF: DREAM THAT BIG AND CRAZY

This Thursday, L.A. will host another Soul Clap and Dance Off with New York Night Train promoter Jonathan Toubin. He will also be bringing guest DJ Ian Svenonius, former frontman for Nation of Ulysses and the Make-up and current frontman for Chain and the Gang. If you think you have what it takes, show up and show off! This interview by John Henry. ► 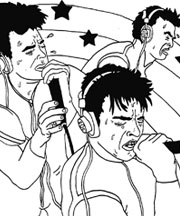 IMAGINE THE BAND: SHIT AND PISS AND KILL

Imagine The Band is a one-clearly-visible-man act consisting of many band members neither seen nor heard without the aid of the imagination. Egos Personos—singer, songwriter, choreographer, ventriloquist, motivator and presidential candidate for 2020—gave a short interview recently before he realized he was being secretly taped. This interview by John Henry. ► 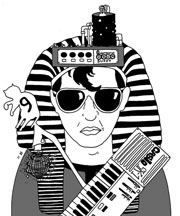 QUINTRON: RISK YOUR LIFE TO BECOME A CALLIOPE PLAYER

Quintron invented the dream-machine-slash-drum-machine called the Drum Buddy and Miss Pussycat invented Pussycat Caverns for her puppets, and during slower moments at their Spellcaster Lodge in New Orleans Quintron compiles the Great Organ Moments thrift-store organ classics compilations. He talks now to John Henry about what organs he loves and what organs he respectfully fears. ►

Each track on this album is catchy and intense, and John Henry’s vocals are as sharp and vicious as ever. Some of the stand out tracks are the opener “Frantic,” which has John Henry making every syllable sound more explosive than the last, and “Psychic Eyes” which tell us to “Forget our heroes” and comes off like a demented attack on the Stranglers 1977 hit. I cannot emphasize how much distorted feedback and organ growling is on this album—there is no reason not to check this band out. ►