Keith Musil and Alexandra Hope collaborated on a music video for Hecuba’s “La Musica,” off the group’s most recent album, Paradise. Twin kitties received instruction from Hope on capturing Isabelle Albuquerque’s dance moves and added their own feline twist. Perhaps Albuquerque will adopt the “lick… ► 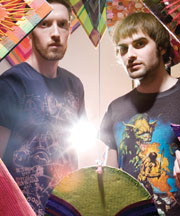 GANGI: WILL PROBABLY NOT DESTROY THE UNIVERSE

Gangi will be playing their final residency at Spaceland tonight so we are lifting this interview out of our archives. The vinyl version of their album A is almost out and they are already working on the follow-up Gun Show, with a title track that sounds like T. Rex and Funkadelic together in three minutes. They speak here when issues of toxic mold were much more on their minds. This interview by Chris Ziegler. ► 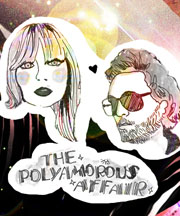 THE POLY AMOROUS AFFAIR: LIVING IN A STATE OF DECAY

The Polyamorous Affair make bolshevik disco-pop in a mossy compound in Los Feliz and emerge only to teach kindergarten, play shows or get snowed on. They have an album due on Manimal and co-founder Eddie Chacon used to be in a band with Cliff Burton. This interview by Dan Collins. ►