Q+A WITH THE KILLS’ JAMIE HINCE 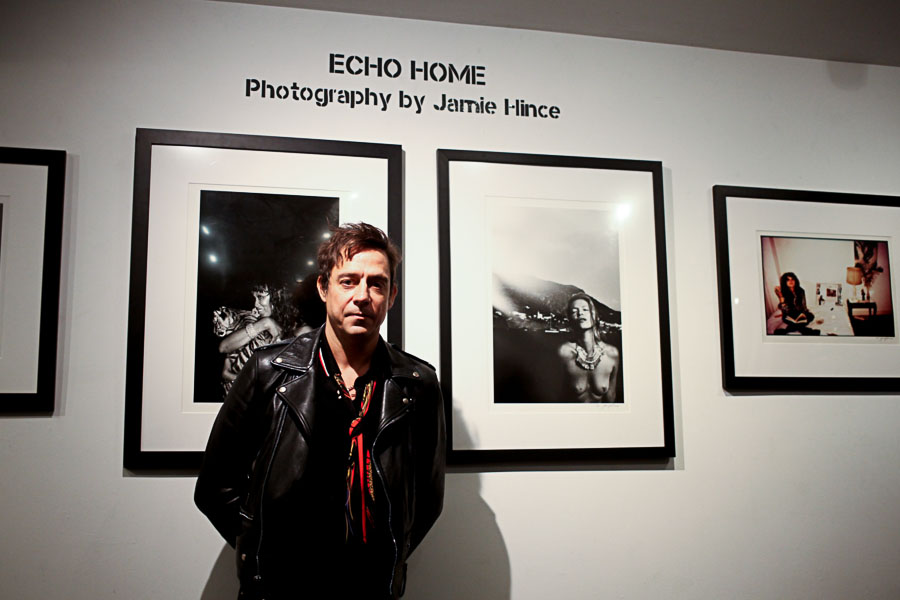 all photos by angela ratzlaff

In order to have the Kills guitarist Jamie Hince show some of his most personal photos in a gallery setting, it would take one motive – a love for animals.

New York-based animal charity Rational Animal approached Hince and band mate Alison Mosshart about getting involved by contributing a photo to print and sell in order to raise money for the charity. Through sewing beds and promoting pet safety, the charity focuses on bringing comfort to at-risk animals in shelters.

Susan Brandt, the charity’s founder, reached out to the Kills this year and asked Mosshart, who is a self-proclaimed fan of the ‘Artists With Animals’ notecards that benefit Rational Animal, if she could model for a photo based off of a classic Terry O’Neill photograph of Brigitte Bardot. In turn, Mosshart suggested that Hince, an avid film photographer, take the picture.

After seeing how good the photo was, Brandt suggested that Hince show a few more of his photos at Morrison Hotel Gallery, which has locations in cities including New York, Los Angeles and Nashville. His exhibit debut took place during June in New York, and his second exhibit opened in Los Angeles on Saturday Nov. 1 with a public reception at retail shop Bookmarc from 4 to 6 PM as well as a private reception at the Morrison Hotel Gallery from 7 to 9 PM.

Hince made an appearance at the public reception, which showed about six of his photographs on one wall near Bookmarc’s register. The guitarist mingled with fans and artists as they looked at his photos and shuffled about in the narrow bookstore.

The private reception hosted more of Hince’s friends and colleagues, including Mosshart who made an appearance towards the end of the event. In the gallery, the back wall displays about seven of Hince’s photographs, which were taken over the years while on tour with The Kills, at home or on vacation with his wife Kate Moss.

In the gallery, his work is presented next to other music photography from Danny Clinch, who took portraits and live photos of notable artists including Johnny Ramone and Dave Grohl. Those photos, however, are separate from the Rational Animal charity project.

Let’s talk about the charity, Rational Animal—they approached you and Alison for that one specific photo?
Yeah, they were doing a project. I think they were inspired by the Terry O’Neill picture of Brigitte Bardot. They had me take a picture, so that’s my dog in the picture. His name is Archie, he’s called Spooky as well.
What was it like taking a picture specifically for the charity?
It was weird in a sense that I don’t really take pictures for any reason. I can’t remember taking any of these pictures; well, I remember, but there’s no part of my life where I have to take a picture. I just sort of snap away. So it is a bit weird when someone says will you take a specific kind of picture with criteria involved.
Did it push you outside of your box?
I’m not sure I’m in a box. [laughs] It was good though. It was very easy. I love my dog.
What’s it like having your photos displayed and having people look at them?
Very strange. I took all these things not intending to do anything with them. So they are just lying around in various notebooks or on the floor for years and years. They were all really familiar to me. Then seeing them framed and people look at them … it just feels weird. Because it’s something from my past, you know?
Is it weird in an uncomfortable way?
It’s actually more direct being in a room where people are looking at the pictures I’ve taken. It’s more direct than playing a show—at least you feel like there is some sort of boundary where you can sort of behave like a character. But it’s also weird to sort of love photography. I love photography so much. There are just so many photographers that I adore. It’s really surreal being amongst some of the big ones.
How did you get interested in photography?
I grew up in a little town where there was little access to music. So I would just hitchhike to the local town, go to the record shop and I would just buy records on the strength of the artwork. So I thought … it’s almost a sin, really, to see these sort of photographs and pictures in my hands. I would buy them without hearing the music. I don’t know—I have really bad photographs, to be honest. I like badly-exposed, blurry pictures. They have some sort of feeling to them.
What was the first camera you bought?
It was a Contax T2 or something like that—a kind of point and shoot camera. We do so much art all the time that [when] you start going on the road and touring, you can’t take an easel and paint—you’ve got to sort of adapt your art in the circumstances. So it became snapshots and those things.
What is the connection between your photography and your music?
In some sense they are completely opposite. I kind of really try in music … you have to study it. I listen to music all the time—I check it out—it’s about trying to dissect it. With photography, I don’t really try at all. I’m not trying to be a photographer, it’s like a journal for me.
How many cameras do you have?
Oh, I’ve got tons. I have these little Contax T2s—I have about seven of them because they break all the time. And I’ve got a little Rolleiflex, a Contax G2.
Do you buy them on tour?
I got this rare camera Rolleiflex that I was looking for in San Francisco three days ago. I do spend a lot of money on cameras, I just can’t help myself. [laughs]
Do you do the processing in the dark room as well?
I did—I used to have a darkroom in my house. But it’s like growing potatoes. It’s a lot of effort for quite a small yield.
Do you have any other plans for your photos? Maybe a book or other exhibits?
I haven’t got any plans, no. It’s defiantly a symptom of my career as a musician—I try to not do anything with my photographs. But then again, if something comes up, I might say, ‘Oh, I guess I could do that.’
What’s next for the Kills?
We are finishing our record—we have a new record. So fly back and go straight to the studio.