Don’t call it a comeback! He’s been here for years! L.A. RECORD’s own Geoff Geis returns to the live musical arena this Friday, and we’re pleased as punch! 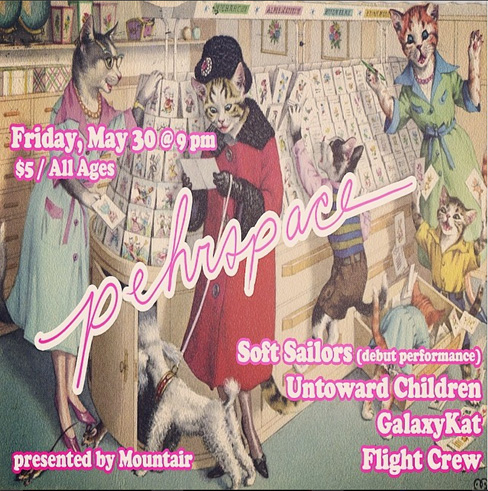 We’re just tickled with the new tracks we just heard from Geoff’s new band, Soft Sailors, who are playing their first show ever at Pehrspace May 30 (Geoff’s got the two songs up on his blog. You should read the post in its entirety, because his writing is tight as shit, too).

These dogs are layin’ down some rock-and-roll-lotta-soul, with Geoff’s signature tenor laying bare his typically thoughtful lyrics, perhaps more emotionally out-there than ever, despite the deceptive deadpan you’ll recognize from his old band Pizza! In fact, Soft Sailors’d almost be a Pizza! reunion, except that Geiss, drummer Tyler Sabbag, and jack-of-all-trades Duncan Thum are now joined by the seriously groovy Jenna Eyrich, formerly from Geoff’s other old band beloved of this magazine, Big Whup (which also featured L.A. RECORD Arts Editor Drew Denny, hey hey!).

Anyway, yeah, I’m gonna go see Soft Sailors Friday. And so should everyone who is currently alive on Planet Earth.