ADVICE FROM PARADISE ROUND 3 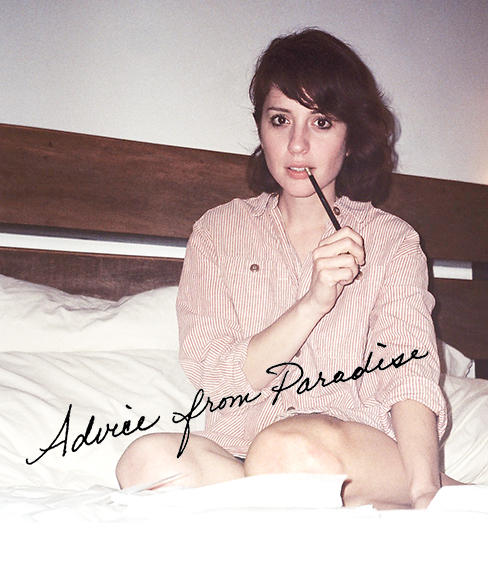 Hi! Any advice on how to break up with a friend? I don’t trust her because she’s incredibly gossipy and bossy. I’ve stuck up for myself concerning her actions, but I’m still getting bad vibes. Her behavior also affects everyone when there is a group hang out, as I’ve noticed others act gossipy and mean around her to fit in. Sounds very high-school, but we’re 30! What makes this a difficult situation is she has a wedding and bachelorette party coming up. Should I just “ghost” her? Help me please!
One thing I’ve learned in life is that bossy bullies don’t change unless they get told they suck. Even if you don’t need your friend to hear that she is awful, and you don’t care if she changes, you should still stand up to her once and for all. It’s an epic move!
Like in my 7th grade creative writing class, there was this Latina girl with that dark, “real raisin” lipstick color, (she was super pretty, actually) who would come up to me every day and kick me out of my seat. No matter where I sat, I was sitting in her seat. How are you gonna act ‘hard’ in a creative writing class? Anyway, one day I decided I wasn’t going to move. As she approached, my heart was racing, and I was sure she was going to start a fight with me. I mean, isn’t that what she lived for?
But she just said “move” a couple of times, and I said “no” a couple of times, and it was over. From then on, I just had to deal with her dirty looks, and that was fine by me. So maybe it’s time to break up with this bully and feel that same sense of finality. You don’t have to be mean, but you don’t have to be nice, either. You could write a letter that explains that you don’t feel 100% comfortable around her. There’s just something off, and you wish her the best, but you ain’t going to her celebration.
My new year’s resolution is to channel the goddess Kali. When battling evil forces, Kali got so into the killing spree that she began destroying everything in sight. Well, that’s not my aim, per se, but the point lies in the focus she had on doing the right thing. So she got a little carried away. ‘Nice’ gets you nowhere. Nice is over. I’m done with nice. I’m sure it’d benefit us both to do more of what we want, and less of what is simply, nice. Good luck!
Recommended listening: Lil’ Wayne “Gossip”

Dear Nedelle,
About one year out of college I got this job, and three weeks into it I met a really sweet and funny girl who was interning there for the summer. When she went off to finish college in another state, we kept the love alive by means of occasional visits and talking every day over the phone.
Then, I began to feel like she wanted me to change more than I could, like I wasn’t doing enough for her and for us. By this time I was employed by and working for the office’s company full-time, a point of contention between her and myself, as I had kept saying I wanted to find another line of work while in fact I stayed committed to the job I had. We broke up just after she graduated. I have chosen not to speak with her. I dated around for awhile but have largely given up.
I still work for the company. They provide me with stability and support and I really like my co-workers. However, with regards to love, I am hesitant to even look around let alone try hard with someone, as I did with my ex. I don’t care anymore.
Should I just date more, and try harder to find somebody? Should I try to find a new job and hold off on love until I do? I could also go back to school. Not keen on that idea but I know I could do it. Should I embrace what I’ve got? By the way, I love your music. Can’t wait to hear more of what you’re working on.
Sounds to me like you have a good thing going. I mean, I don’t know why you asked me if you should find another job. You like your job. Sure, if you have other interests that could eventually lead you away from it, you should pursue those. But you might be associating the failure of the relationship with the fact that you stayed at your job.
Just so you know, if you had suddenly become the CEO of Nitwit, the awesome new app, or grown a waxed mustache and opened a cafe with coffee made from the droppings of some exotic animal, your relationship still wouldn’t have lasted. It just wasn’t going to work out. You need to knock her off that pedestal if you want to move on. She was lame anyway. (I feel like it always helps to hear that, though I could be wrong.)
As for dating more and trying harder to find someone, that’s a tough one. It’s up to you. Everyone who wants to find love is frustrated. That’s real. So you expend as much energy as you want. Some evenings you surf OK Cupid or go to a bar, and some nights you read a book. But don’t be hard on yourself for lack of trying. Most nights I just want to cuddle with my cat named B (for boyfriend.) That’s my problem.

Recommended listening: The Everly Brothers “I Wonder if I Care As Much”

VIDEO: ROCO JET “OPEN DO...
DANCE DISASTER MOVEMENT IS BACK!