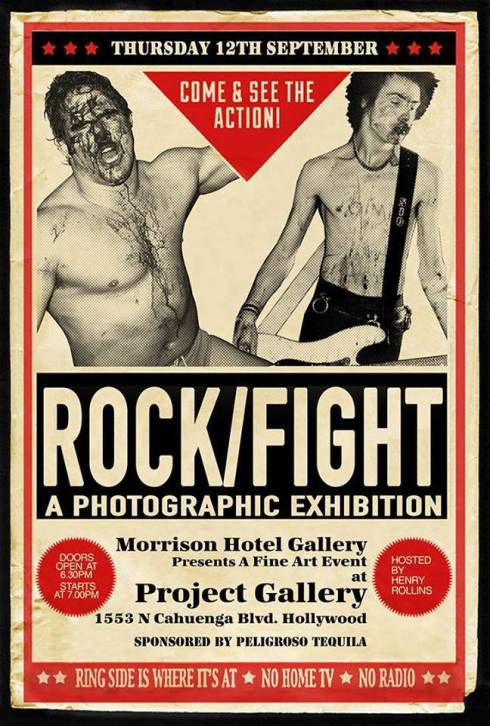 A new photo exhibition has opened in Hollywood called Rock/Fight.  Most of the shots were taken at LA’s Olympic Auditorium downtown.  The idea is a pairing of ’80s punks with ’60s and ’70s boxers and wrestlers. Half of the exhibition are action shots of  leathery brawlers snapped by photographer Theo Ehret in the ’60s and ’70s. The other half, paired with Ehret’s bruisers, are of high-energy hardcore punk bands who performed at the club in the early ’80s, as well as a few other timeless rock ‘n’ roll shots. 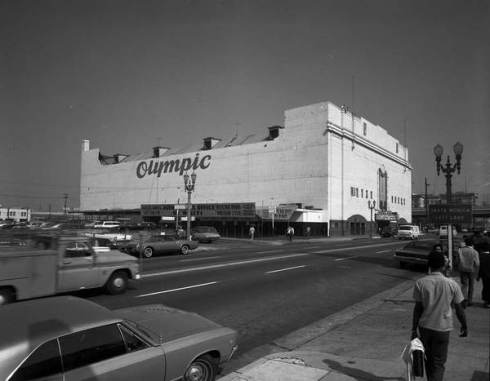 Host Henry Rollins explained the event to a full house.

“Rock and roll is a contact sport. Most of you here in this room have been spectators in one way or another at either sports events or at a rock show. Performing rock and roll is hard work, just like boxing or wrestling can be brutal to the body of an athlete. You see these images of both boxers and musicians in these airless, windowless Dostoyevsky-ish backstage rooms: I have been in many of these rooms and they are straight off the pages of a Dickens novel.  Over there is a photo of Muhammad Ali and the heavyweight champion of rock ‘n’ roll, Iggy Pop.  That’s going to be the only time I’m above Iggy Pop in anything.” 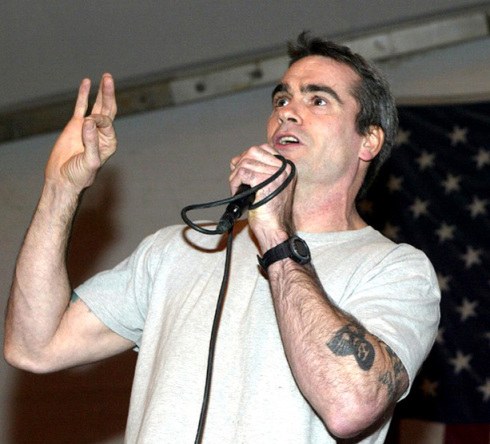 The crowd laughed as Rollins gestured to photographer Edward Colver’s 1981 outtake of the cover shot from Black Flag’s Damaged Album, Henry  punching a mirror. It’s framed above a 1972 Mick Rock snap of Iggy Pop bending backwards like a gymnast.

“That shot was taken just down the street,” Rollins told the audience, referring to the Damaged cover shoot.

The event was sponsored by Peligroso Tequila.  I waited in the liquor line. I was eager to get a drink, but was able to survey the framed photographs on the wall next to the line.  The first shot to my immediate right was the Colver photo that Rollins joked about. There it was, the outtake from Black Flag’s Damaged LP cover shoot in 1981. 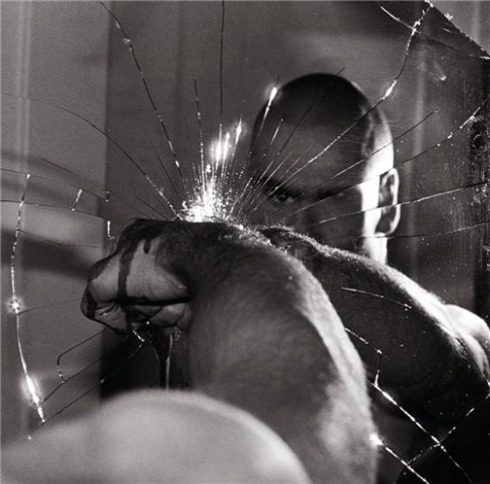 Ed Colver was interviewed recently on website DoubleCrossXX.com, where he spoke about this mythological photo shoot.

“The Damaged cover photographs of Henry I shot at what was called the Oxford house in Hollywood. I taped the entire backside of the mirror, turned it over and broke it with a hammer, then cleaned it.  I made the ‘blood’ with red India ink that I brought with me and stuff I found in the kitchen. After experimenting for a bit, I came up with red ink (for color) liquid dish-washing soap (consistency) and powdered instant coffee (for color).

We did some photographs outside with a blue blanket as a background [unused, no mood] and then some inside. The best photographs in my opinion were not used. [Like the one with Henry’s eyes glowing red from my flash.] They were deemed too demented. [Those photos have been ‘misplaced’ for over 20 years.]

The back cover photo of just the broken mirror was my idea, and I took it at a friend’s house in Los Feliz. I photographed the mirror for the back [of the album] on Rowena Aveue. To have it only reflect black, I laid the mirror on a sidewalk at night and photographed it at a slight angle, so as to not have my camera or I show up in the reflection. Where I shot it was two blocks from the LaBianca house scene of the Manson murders. My friend’s aunt that lived a block away found bloody clothes in her alley after the murders. She lived on St. George, and at the time of the murders Tex Watson lived on Griffith Park Blvd.” (More about Damaged here.)

Below the Rollins shot was Iggy Pop, “The heavyweight champion of rock and roll.” 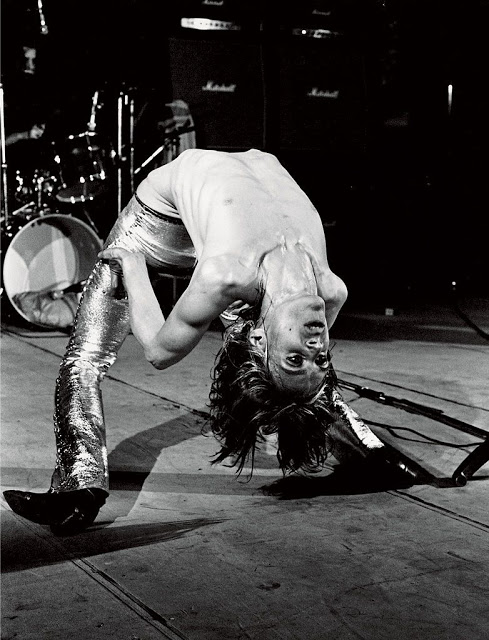 Seeing some of  the Edward Colver shots was surreal, as I grew up poring through punk fanzines and had seen many of the classic early ’80s punk photos on flyers, record covers, back covers and inserts.  The one of Minor Threat was truly breathtaking to see up close and personal. My heart quickened. I could feel the energy and smell the sweat. 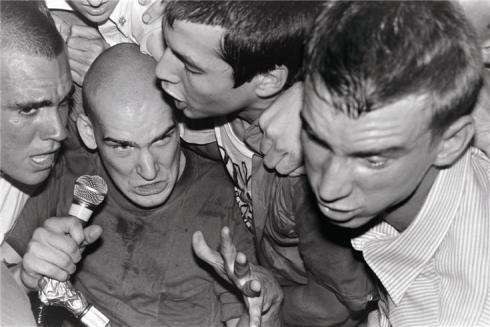 Growing up a fan of 1982 punk documentary Another State of Mind, I recognized Mike Ness’ outfit from the film. 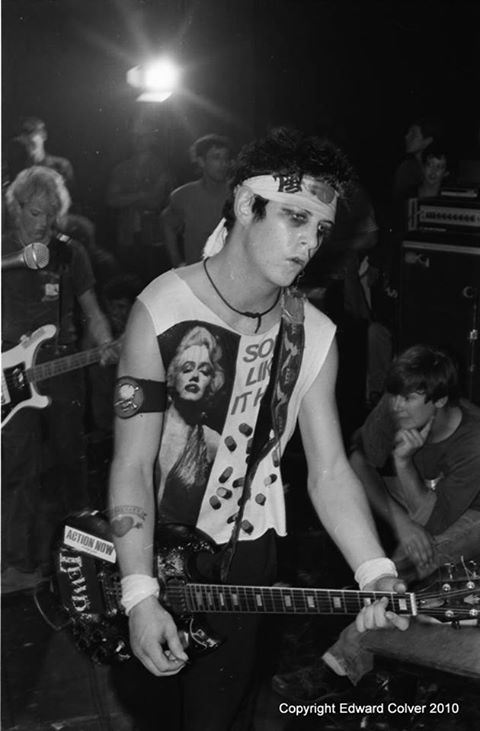 And next in line, waiting impatiently for a cold drink, there was John Lydon to greet me. 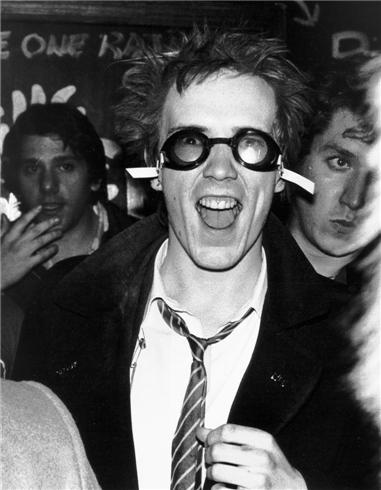 I was asked what I wanted to drink by the Peligroso Tequila staff.   A bearded young man told me that the special was Cinnamon Tequila.  He gave me a shot of that and mixed me a tequila and OJ topped with a little special syrup and a squeezed lime.  The cinnamon tequila actually wasn’t bad, but as agave cactus and cinnamon are grown in separate regions of the world, I found the pairing to be odd.  (With a little research I found that Mexico is the major importer of “true” cinnamon. They get it mainly from Sri Lanka, who supply about 70% of the world’s cinnamon demand. Food for thought.)

With tequila and OJ in hand, I weaved my way through the crowd to the restroom, where I found the most unimpressive photo of the exhibition, a shirtless Lenny Kravitz taken by Stephanie Pfriender Stylander.  Bare-chested Lenny and his six-pack abs go for $950, if you’d like a 16″ x 20″ archival digital print.  Given that this photo was the lamest of the show (runner up being some bare boobs from Woodstock ’99 shot by Henry Diltz), next to the crapper was a fitting place for ‘ole Kravitz.  Maybe I’m being harsh, but honestly Lenny Kravitz does not deserve to be in the company of Iggy Pop, The Who, Bruce Springsteen, Black Flag and Minor Threat.  Just saying.
Stephanie Pfriender Stylander, Theo Ehret, courtesy of Entertainment Weekly’s EW.com

Now heading to the left, her eminence Debbie Harry shot by Bob Gruen in ’77. 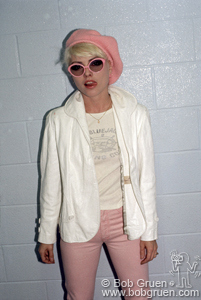 Below Debbie was this wonderful shot of Keef by Ethan Russel from the Stones’ ’72 US Tour. 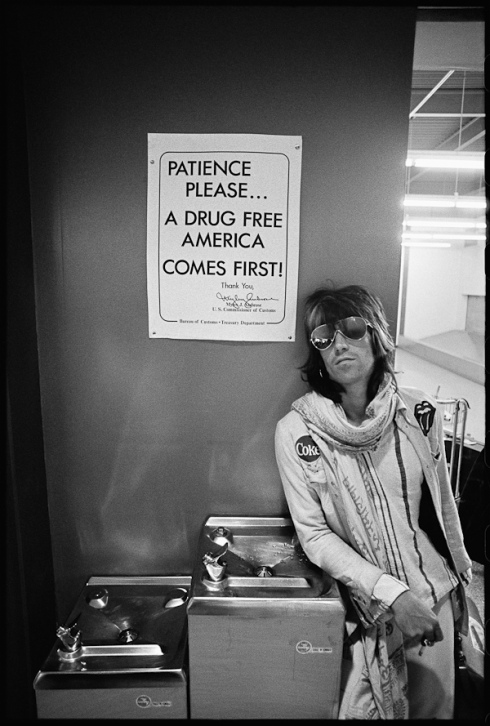 Next to Keef, we have the Who, fucking shit up at the Monterey Pop Festival. 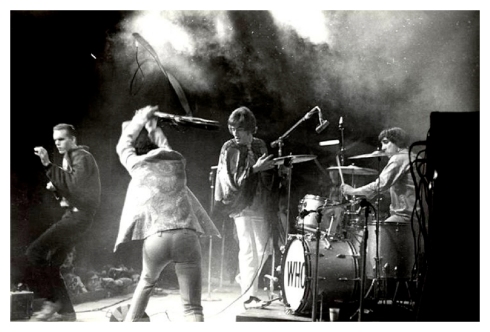 Getting to the main dish, Ed Colver’s seminal “Flip Shot.” 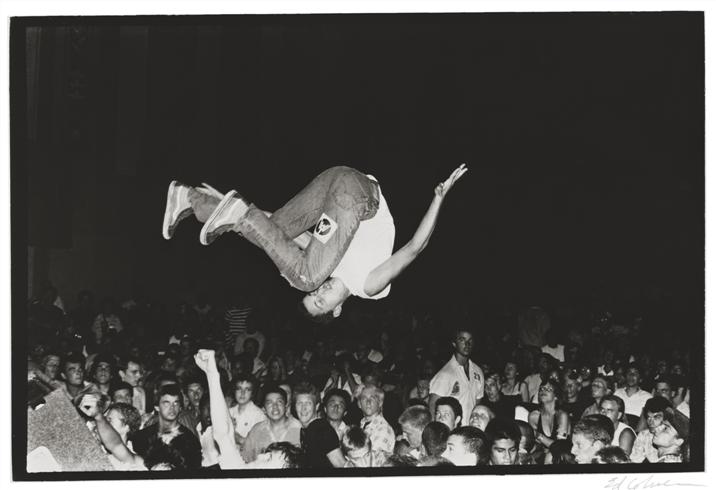 Colver was chatting to folks near the shot  (although they seemed to be queuing up for a photo-op with Henry Rollins). I shook Colver’s  hand and told him “good job,” explaining that I had used his “Flip Shot” for a flyer I made in high school for a punk show on Bainbridge Island, Washington.  He seemed pretty nonplussed about my story and a little annoyed at the fact he couldn’t make a beeline for Rollins.  It seemed like he had something he wanted to tell Henry, but he had to line up just like everyone else.  Rollins was telling some very tall, high-heeled women an animated tale about one of his middle school teachers in D.C.  The women were smiling and nodding politely, waiting for their chance to ask him for a photo.

Now the meat of the exhibition.  A massive shot of Sid Vicious by Bob Gruen from the Sex Pistols 1978 show in Dallas, Texas.  A 30″ x 50″ digital print is on sale for five grand, but there’s smaller sizes available for $800 and up if you’re so inclined.

It was time for another drink.  The line was even longer, and filled with annoying types.  I don’t use the word “hipster,” I find it to be uninventive and the “n word” for white people.  I prefer to call clueless young fashionistas “douchebags.”  Douchebag is my word of preference.  If I was to define the “h word,” I’d say that an “h word” is someone who shamelessly co-opts an element of authentic subculture for elevation of personal status or appearance.  In the liquor line was a girl with a fedora wearing a brand new Joy Division t-shirt as a skirt.  I’m aware that shops like Urban Outfitters now stock Joy Division and Minor Threat t-shirts.  It doesn’t really bother me that Urban Outfitters sells the shirts, but when paired with a fedora and worn as a miniskirt, it did really bother me.

Maybe it was my aggravation building with a growing crowd of fashion-conscious young Caucasians, but I began to really dig the boxing and wrestling photographs, as I stood in the liquor line for the 2nd time.

You had greats like Muhammad Ali training at the Main Street Gym in ’74: 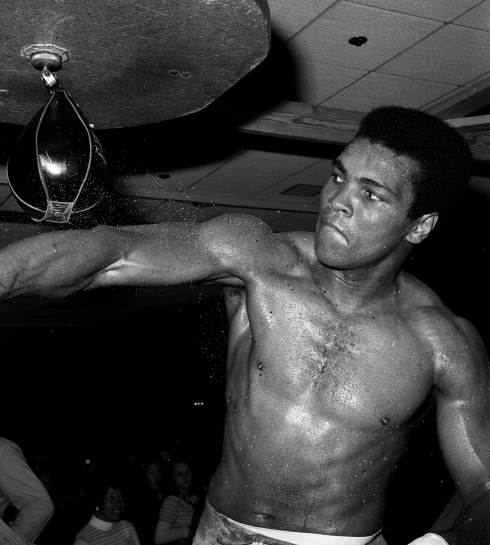 You had this brilliant shot of a free-for-all at Olympic Auditorium, starring Andre “The Giant.” 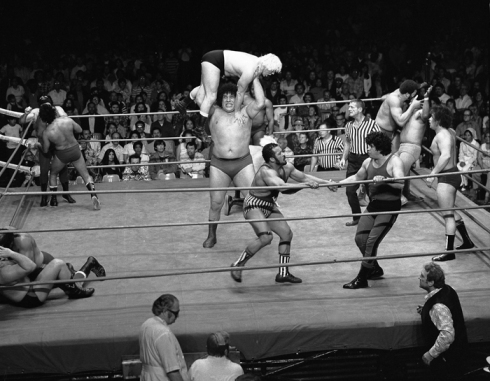 I met a man named Carlos who grew up in East LA and was an avid attendee of many of the punk shows depicted in the Colver photos.  “Ed Colver is like our Van Gogh,” he told me.  “We grew up with all of these albums, t-shirts, going to all of these shows.  I was at both that Andre the Giant wrestling match AND the Dead Kennedys show, both at Olympic Auditorium downtown.” 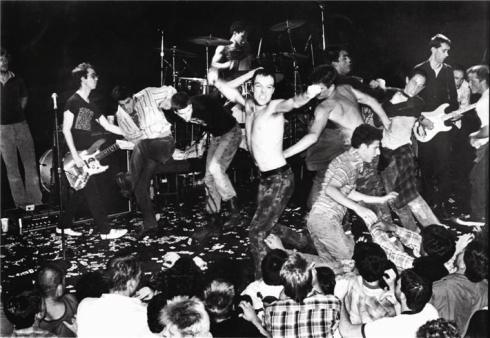 “The openers for Dead Kennedys were Fishbone.  They had this trombone player who was crazy, man.  A kid stage dove off of a PA speaker and knocked into him.  The trombone player tried to fight the kid.  In those days, they didn’t frisk you before you went into punk shows, so the kid had a fuckin’ knife.  He pulls out the knife and stabs the fuckin’ trombone player from Fishbone.”

“What happened next?” I asked.

“Nothing. The show just went on.  The band got the guy out of there and the Dead Kennedys just went on and played.  That’s how it was in those days.  At some of these punk venues, we’d be leaving the show and outside would be Crips or Bloods just waiting to start shit with you. We’d be like, ‘Man, are you serious?  AGAIN?’

Man, right around the corner up here on Hollywood Boulevard used to be this club where Courtney Love used to hang out.  She was a stripper at Jumbo’s at the time.  One time, I saw her shooting up heroin with River Phoenix in the bathroom.”

After another round of tequila, the place was getting pretty crowded and I headed out.  On the way out, I bumped into Henry Rollins.  I thanked him for calling rock and roll a contact sport. I rediscovered a couple old photos of mine recently that reminded me what life was like sometimes as a touring rock and roll band on the road.  I was often treated like a human piñata and could relate to what Henry had said. 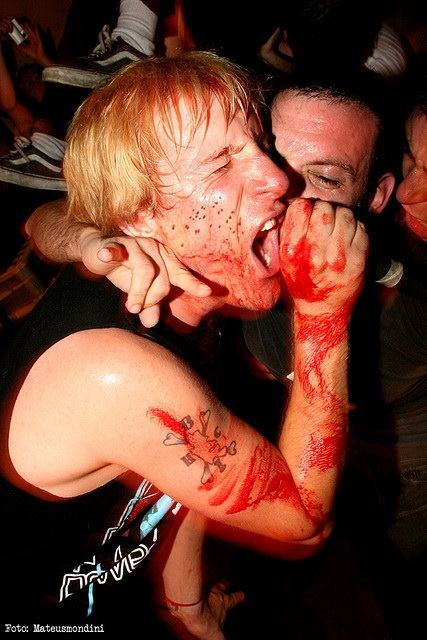