ROSEMARY’S BILLYGOAT: A BIG, HAIRY KICK IN THE BEHIND FROM HOBBIT FANS 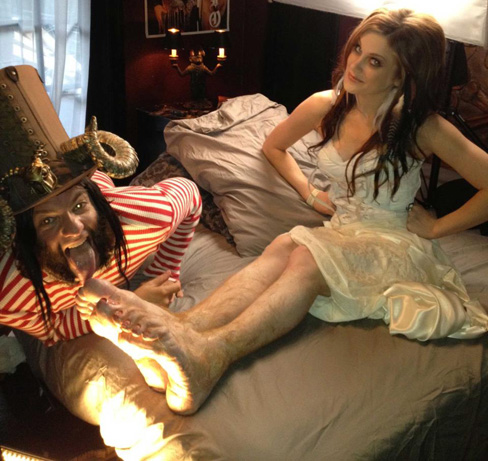 What does it take to piss off a hobbit? It turns out that you don’t need to ravage all of Middle Earth with orcs and ghoulish riders on winged beasts–it can be as simple as implying a foot fetish. That is what singer Mike Odd learned when his band Rosemary’s Billygoat released a video for their new song “Hobbit Feet.” Directed by horror filmmaker Gris Grimly, the clip features a kind of soft core pornographic rendering of Odd licking the toes of a white-hooded girl who has large, hairy feet like those of J.R.R. Tolkien’s signature characters.

The band uploaded the video on December 14, the day The Hobbit premiered in theaters. “I thought it would get a little extra attention that way,” Odd confessed, “but I didn’t know the kind of attention it would get.” He announced the video on various heavy metal sites that had supported the band in the past. “I meant it as a fun thing, a kind of counterpoint to all the mania and publicity surrounding The Hobbit. Within about fifteen minutes the first email came in, it was from some maniac in Vermont threatening to cast a spell on me for defiling the image of hobbits. I figured it was obviously a joke–but then more started to come in. Lots of them.” The Hobbit Feet video was being passed around in chat rooms for Tolkien fans. And coming on this high holy day for which they had been waiting since the release of the last Lord of the Rings film, Odd’s video was not well-received. The little people were mad.

In all, Odd has received over a hundred letters of complaint to date. He shuffles through a pile of emails, and hands over several. To read through them is to enter a land more foreign than anything Tolkien himself wrote about, a neurotic world in which fantasy and reality are inseparable, and fictional characters become sacrosanct. “You’re a pervert of the worst kind,” a woman from Milwaukee tells him, “why don’t you go lick a human’s feet? You’re not good enough to lick a hobbit, it makes me sick that you would want to try.” A man from Florida accuses him of “ruining the beauty and purity which hobbits represent,” and vows that “by the power of Lothlórien, the servants of darkness such as yourself deserve to charred by the flaming hot breath of Smaug.”

Mike Odd is an unlikely candidate for the new Sauron. Polite and affable, he is an entrepreneur and would-be polymath of carnival culture who wears many hats–mostly of the jester variety. Among his flamboyant endeavors, he has toured extensively with the sideshow troupe Hellzapoppin, logged time with the puppet rock band Green Jelly, and just spent his first year hosting Knott’s Berry Farm’s Halloween Haunt. In addition, he produces a boutique line of belt buckles, Monster Buckles, for people who feel the urge to cinch their pants with things like the visage of Cthulhu, or a giant pewter squid the size of a cod piece. His most ambitious project was a retail outlet, The Rosemary’s Billygoat Odd-itorium, an unmistakable Sunset Blvd. showroom which featured a pair of giant rotating eyes above the front door, and sold such household necessities as two-headed fetal pigs in formaldehyde and Knights of Columbus robes.

While Odd comes across as a would-be P.T. Barnum, the results of his grandiose efforts are often something closer to Ed Wood. His mobile retail truck–designed in the style of a circus car, complete with a Fijee Mermaid–has variously wound up stranded in Buffalo, New York, and stuck in the middle of a muddy field on the way to Warped Tour. As for the store, which closed in 2007, it was undermined by an increasingly chaotic set of problems that can only be described as surreal.

“The worst issue was with feral cats,” Odd reminisces with a wince. “The upper floor was abandoned, and filled with them. The ceiling was weak and holes would open when it rained, and the cats would fall through in large numbers. I came in once after a storm and the building was flooded, and a bunch of cats were swimming around in the store. There was a guy shopping one day when it started raining. I remember thinking, oh no . . . and then suddenly a hole opened up and at least a dozen cats fell on this guy’s head, knocked him to the ground. They were feral so they started attacking him. I ran over to help him, and then they started attacking me. We both ran out into the street covered in claw marks.”

Standing in the background to all of Odd’s efforts has been the band Rosemary’s Billygoat. A local hard rock stalwart, the group was formed in LA County’s South Bay area in 1991, and has been sauntering on for the two decades since. Wedding a vintage 70s metal sound with a Gwar-like theatrics, the band has made a name for itself by putting on shows of such grandiosity in clubs of such small size that it makes Spinal Tap seem normal in comparison. Wheeled coffins shoot sparks while infants are impaled on pitchforks, electric chairs smolder, and a flaming red pentagram is projected onto a bed of fog in the middle of a twelve foot diameter metal ring–a device so large it has sometimes wound up stuck on the sidewalk if the band can’t find a way to fit it through a club’s doorway. Meanwhile, Odd prowls through the audience on stilts, often having to duck his head to avoid low ceilings.

“We have had our share of mishaps,” Odd admits. “I used to have a giant pentagram made out of pizza, and I would pass the slices out to the audience. I got tired of having to get a new pizza for every show, so I made a version and had it plastinated. The next show we did, I went to get the pizza and a slice was missing–apparently someone stole one. Then some guy in the audience started to wretch, and vomited up chunks of this plastinated pizza into the monitors and the show was stopped so an ambulance could be called for him. There was a very bizarre incident at another show–I wheeled the coffin out into the audience, it usually has dolls in it which I spear, but this time when I flipped open the top there was a homeless guy in there. Apparently he climbed in and fell asleep while we were loading in, and he was still there, asleep. In the middle of the show I had to wake this guy up and help him out of the coffin. It was very confusing for myself, the homeless guy, and especially the audience.”

Considering the chaos that seems to touch everything he does, perhaps the wrath he has inadvertently stirred among Tolkien fans is not that much of a surprise? “I guess it’s par for the course, but this is a little overboard,” he says, fishing out another email. “How dare you mix up hobbits with your sick little sex fantasy,” an woman writes. “Hobbits don’t do things like that, and even if they did it sure would not be with some grimy rock musician like you. You wish.”

There is a curious overtone to the letters–hobbits apparently are considered by their adherents to be asexual. “Combining hobbits with an implication of sex is what really sets these people off,” Odd acknowledges. “Do they think hobbits are hatched out of eggs, or miraculously incarnated? I guess the world of Tolkien is pretty prim when it comes to sexuality.” Indeed, yet another email accuses him of “raping the innocence of the Shire by projecting your own dirty mind into a world where you don’t belong.”

“I don’t mean to burst anyone’s bubble or piss anyone off,” Odd pleads in defense. “I myself am a big Tolkien fan–well, or at least I thought I was, but judging from these emails, being a Tolkien fan has some facets I apparently wasn’t aware of.” Some of the fury was tempered when the video was reloaded onto Youtube as “Hobbit F***,” so it was not as easily found, and commentary there has been minimal. But the video is still on the band’s website, and the emails keep coming in. “This one is from today,” Odd explains, and hands forth a letter which accuses him of being “filthier than Gollum.”

Will they stop? Odd shakes his head. “I don’t know. I figured they would stop after the first few days the film was out, but I am still getting them. Hobbits have a much longer lifespan than humans, right? So I guess I might be dealing with these people for a very long time.”

WILLIE NELSON WILL BE THE NEXT GANDALF