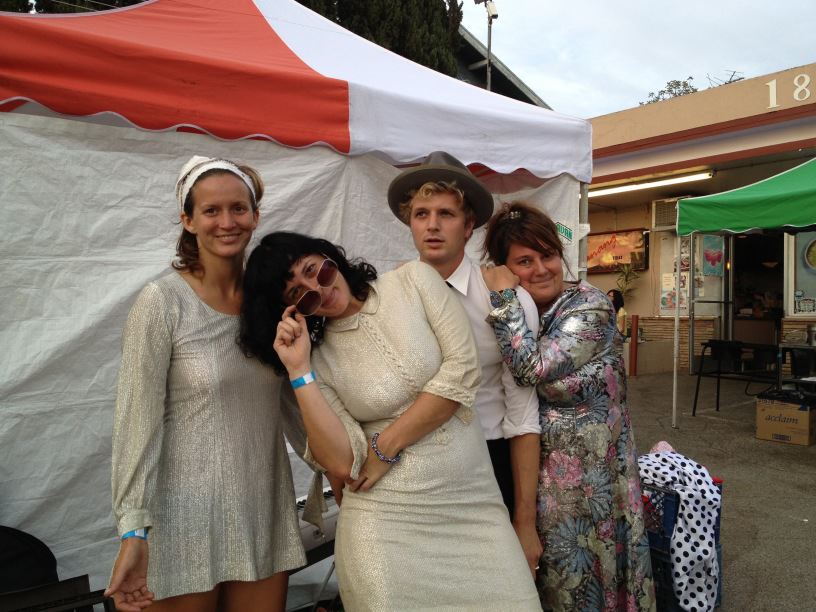 Echo Country Outpost’s Chris Hajek was supposed to write a blurb about Bloody Death Skull to be read aloud at the Tommy Santee Klaws record release show before BDS’s set a few weeks ago, and instead he wrote an essay. It’s too sweet not to be shared in its entirety with the whole of the world. Bloody Death Skull played its first show at the Outpost…as well as its third, fifth, and sixth, and somehow BDS evolved into the quintessential fort band for the East Side’s favorite cozy plan den. Chris is pretty much Bloody Death Skull’s favorite uncle. He’s also the tiger panda in the BDS video for “Mama?”. Watch the video here and below that is Chris’s thesis on the dangers and pleasures of the Bloody Death Skull experience.

Some things are too dangerous. They’re too sweet, too hot, too bright, too sexy, too violent, too irresponsible. And we do these things for one reason: because they feel so good. The pleasure-pain spectrum is not a straight line, it’s a circle, and the most intense of joy and pain exist alongside each other. Things that are dangerous are fun. This can be confusing. Is there a greater purpose to life than the pursuit of pleasure? Are sometimes the danger levels just right?

The pleasure in watching and listening to Bloody Death Skull involves many different receptors. Despite the name—or really, in light of the name—a first impression of Bloody Death Skull is usually that they’re adorable. Three cute girls and one handsome dude all tangled up in red jumpsuits, Hawaiian shirts, toy space helmets and zombie makeup, they’re probably the least terrifying people who’ll ever show up to your party with four gallons of fake blood and a Skull in their name. They sit around on stage like kids in a sandbox, surrounded by toys and instruments and pedals and cables and things they barely understand, and they serenade you with playmusic like this is the first time they’re trying it themselves.

Bloody frontwoman and chief weirdo Daiana has obviously read and watched a lot of horror and sci-fi. Like most goofball-oriented half-nerds, she has observed that the most shocking and terrifying efforts in these genres usually ascend to cult status, not for being actually terrifying, but for bringing you to hearty laughter in their attempts. Bloody Death Skull excites that same transmitter in your brain. They tweak that gland as if you’re being frightened, so they get that same fear energy from you, except it comes out of you like happiness instead—like those sudden-onset laughs that sometimes make you fart on accident like you’re an old person (pass gas), then you sit there and reflect on just how delightful it is that sudden-onset laughs are a real thing in this world.

The one man in the band, Gerard, is a law school genius with a deep, goofy, not-for-singing voice, who also happens to inhabit the body of a Venice Beach-blond heartthrob. He’s sweet as candy and safe for your teeth. Sorry for the ladies, he’s also married and usually hides under a big helmet. Donna is a recent addition, and arguably the most playful. She brings a militant level of thoroughness to the art of play, and she brought with her an arsenal of toys and noisemakers to back it up. She and Beth team up like friends at a slumber party to provide all the backing vocal and toy play support the band needs. I mentioned Beth, ahhh yes Beth. She sings like an angel and has the face to match. If the band needed to plant a spy at some sort of Bureau of Grace & Beauty, she’s their gal. The three of them combine in a formula for visual and audible pleasantness that is hard to beat. But the formula requires Daiana. Daiana is the driving force behind the band in both spirit and song. She inhabits that cute and natural end of the beauty spectrum that makes everybody happy. And she sings through a big, thoughtful smile that seems to shine just as brightly inward as it does out toward the audience. Content and contemplative. What is obvious is that they are all very good friends, and they make you feel very comfortable experiencing something that, by name, seems designed to do the opposite.

This band was raised on Wild Kingdom and televised space shuttle launches. They sing about fun things like their favorite movies, science and the cosmos, flirting with boys, and understanding the prostitute psyche. Sometimes they cover songs, usually romantic numbers. The songs they perform, originals and covers, feel like they’ve always been longing for Daiana to sing them. Her voice has a cute and squeaky assertiveness that would make her your kid’s favorite teacher if a school setting like that were ever to exist. If teachers could teach whatever they want in school, Bloody Death Skull classes would create kids who grow up to be fun, old-fashioned things like detectives and spacemen and undersea explorers.

Musically, the band swirls together whatever sounds, toys and instruments they enjoy through a bunch of pedals and cables and ukuleles and things hooked up improperly. And they process this all, I think, through Daiana’s brain, which translates most of it into a pleasant, lo-fi pop sound, rooted in the sort of fun, sappy, playful and sneaky tunes you find in late-50s American Rock and Soul. Love songs. You-better-not-mess-with-me songs. Punk rock may play a part too, but I think just enough to get them on stage pretending they’re angry. Visually, the outfits, toys, lights and bubbling test tubes are a feast. It’s a PBS daycare playset. And physically, well, they’re a very attractive band too. But that’s not to say they are confident in any of this.

And that brings me to the brightest side of the Skull. Seeing this band is uplifting. They are willing to try to teach you things that they themselves are still working through. They want to take this journey with you. They deal with their insecurities by intentionally extroverting themselves on stage. It’s an exercise in fun. It’s all the best lessons of Dr. Seuss and Shel Silverstein. It’s the deep philosophy of grade school sleepover conversation. And it’s totally sincere.

When you listen past the vagina jokes and keg clanging, screaming looping things and thunderbolt sounds, what you hear are people who are exploring life with curiosity and cleverness. Totally sentimental. It is good to embrace things that make you feel good. Guilty pleasures can be guilt-free. Ask Wild Kingdom.

Animals are smarter than us. They have not tricked themselves into thinking there’s a better tomorrow that’s somehow worth a trade for a less good today. They see blood they say let’s drink it up. They see a playful time on stage they say let’s eat it up. Bloody Death Skull has learned this lesson and they’ll teach it to you.