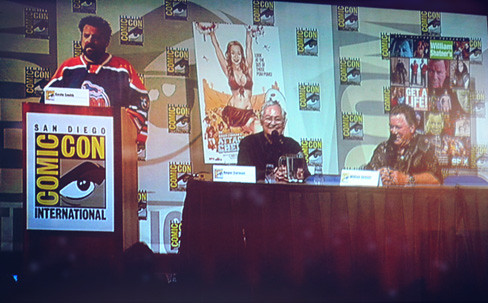 I spent the last weekend wandering around the annual San Diego Comic-Con blessed with a free pass on my L.A. RECORD credentials. Based on the time honored principle that if something’s worth doing, it’s worth doing drunk, I headed over to the local Ralph’s and mixed myself a whiskey coke, glugged down about half of it, and strode over to the Roger Corman / William Shatner panel, hosted by the “King of Geeks,” Kevin Smith. Honestly I was pretty amazed we even got in, as any of these men on their own could hold an audience with several thousand nerds. After about an hour of being regaled with anecdotes of working together and facing riots on film sets, it was time for the obligatory q & a. Generally I prefer to pose my questions in a private setting, as quiet as possible with little distraction, but with a bit of liquid courage I felt it was in my journalistic duty to approach these mega-stars and ask the hard questions that no one had ever dared to think of. Specifically: “What was it like working with Clint Howard?” and why Kevin Smith refused to cast him.

Clint Howard? Yes, I did just ask these legends about Ron Howard’s perpetually creepy brother who played the alien child Balok in the original Star Trek, and the cooler than cool drug dealer / matchmaker Eaglebauer in Roger Corman’s Ramones film Rock ‘n’ Roll High School. They of course lauded the man with praise, Kevin Smith protesting that Clint Howard was too good to work with him—it might be true given his recent fare—and Shatner sidestepping the question with praise for Roger Corman. With that, the panel was closed, my silly subversion acting as the closing remarks of the panel, and I realized it was certainly time to hightail it out of there before a legion of Trekkies could dismember me.

Carousing around the rest of the afternoon it was clear that Adventure Time had made a huge takeover. You literally could not look at any part of the Exhibition Hall floor without seeing at least one person dressed like series hero Finn The Human. Even at the evening’s close, when the Masquerade Simulcast viewing crowd had devolved into a crazy dancing glowstick party, fueled by an empty pop DJ set that would give Kyle Mabson a run for his money, we found ourselves grinding up on a shirtless “Sexy Finn” who was accompanied by a similarly hilarious and shirtless “Sexy Bob the Builder.” Subsequently we found ourselves gorging on deep dish pizza and microbrew pints at Berkeley Pizza, whilst Adventure Time series creator Pendleton Ward hung around outside playing hacky sack. I pestered him a bit about Adventure Time’s possible ties with the Don Johnson post-apocalyptic film A Boy and His Dog. He disavowed any connection. After my rewarding day annoying celebrities—even by Comic Con standards—I left the temporary city of permanent children with the knowledge that somewhere, one more person was thinking of Clint Howard, and for once it wasn’t me.