Permanent Records is coming to L.A.! Specifically, Eagle Rock, the new home of their second shop. The grand opening party is this Saturday, and they'll be hosting performances by the Cosmonauts, Francis Harold and the Holograms, and Amanda of Not Not Fun (DJ set). We spoke with Permanent co-owner Lance about what's in store. This interview by Lainna Fader." /> L.A. Record
Menu 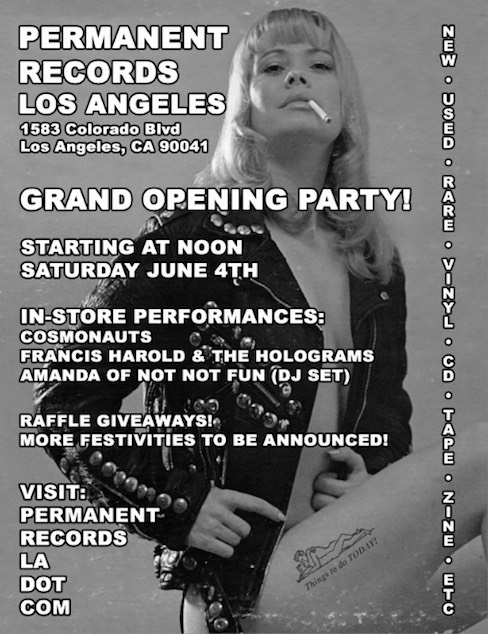 Chicago’s Permanent Records is coming to L.A.! Specifically, Eagle Rock, the new home of their second shop. The grand opening party is this Saturday, and they’ll be hosting performances by the Cosmonauts, Francis Harold and the Holograms, and Amanda of Not Not Fun (DJ set). We spoke with Permanent co-owner Lance about what’s in store. This interview by Lainna Fader.

What’re you gonna carry in Permanent L.A.?
It’ll be real similar to what we have in the Chicago location—new, used, rare vinyl, CDs, 45s, DVDs, cassettes, zines, a few books here and there.
How’d you find the right spot for the shop?
We were just in town visiting, scouting out different locations, and we were having a bite to eat at Fattie’s in Eagle Rock and stumbled across this empty storefront. We inquired, and the landlord is this super cool guy. We signed a lease that week we were here. We weren’t really planning on it.
What do you have planned for the grand opening this Saturday?
So far we’ve confirmed Cosmonauts, an Orange County garage-psych band, Francis Harold and the Holograms, a weird punk band from Huntington Beach, and then we have Amanda and Brit from Not Not Fun DJing. And some other special stuff, to be announced.
Got any secret killer records you’re gonna drop just for opening day?
We may unload some out of print Permanent rarities—a few test pressings—loads of used records that I’ll be selling from my personal collection—I’ve collected over the last ten or fifteen years—lots of rare and out-of-print stuff and a bunch of new releases, stuff we’ve been digging in the Chicago store. Lots of goodies that have never been for sale before, all available at the same time.
Is crate digging culture in L.A. different from in Chicago?
No, I think it’s the same across the planet. Once you get bit by the vinyl bug, you’re in for life! There’s rabid record collectors here, just as much as anywhere else in the world, especially major metropolitan areas. Aside from the fact that there’s probably a lot more people who spend a lot more time indoors in Chicago, it’s probably about the same as L.A. We’ve already run into loads of people who’ve popped in to the shop and said how stoked they are that we’re moving into the neighborhood. We figured L.A. was great anyway and Eagle Rock’s an awesome shop to have a store. I don’t think there are any major differences but that remains to be seen—I’ve only lived here for three weeks!
If you had an unlimited budget, who’s record collection would you buy for the shop?
Oh wow—I’ve never considered that before. Johan Kugelberg is a notorious collector who comes to mind. Byron Coley—he and Thurston Moore both have crazy collections that span four or five decades. Those two guys and Kugelberg. Clint Simonson from De Stijl records has bitchin’ collection. I’ve never thought in those terms though cuz I bet you those guys wouldn’t sell their records for anything. But if money was no thing, and those guys were willing to sell, those are the guys I’d approach first.
What collector in L.A. do you most want to meet?
I don’t know a whole lot of guys in L.A. It’s such a great distance between Chicago and L.A. and I’ve only been to a handful of record fairs out here and haven’t really reached out or gotten acquainted with too many collectors here yet. I know the Shaws live here, Greg and Suzy from Bomp, and I bet their record collection is amazing.
What record in your personal collection are you most proud to own?
Oh wow, that’s a really good question. Shit. I own thousands of LPs and thousands of 45s. I think I should keep it simple and say the test pressing of the very first release we put out on our label—Warhammer 48k’s An Ethereal Oracle. I own lots of rare records but really, that’s the one I’m most proud of. The first thing I ever did on my own, as far as the label’s concerned, and that record just means a whole lot to me in general. I’m really good friends with all those guys and I have been for, shit, ten years? Fifteen years now? Let’s call it ten years; I’m not that old!