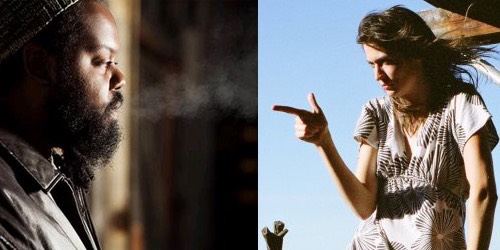 L.A. RECORD has decided take advantage of a tiny bit of the 50,000 years worth of accumulated creative wisdom floating openly through the city and so we are starting a column where you can send in questions and we will get you answers from the people who made the best records in your collection. Now instead of wondering what Kim Fowley would think of your love life, you can actually find out! Send future questions to Daiana Feuer at daiana@larecord.com. L.A. RECORD guarantees nothing but the absolute reality of all answers. This issue we talk to Ras G, beat dominator and traveler of spaceways, and Amanda Jo Williams, steely-eyed folky-tonk wildness wrangler.

My boyfriend always smells like onions and won’t shower before sexing, what should I say to him? He is very self-conscious about it. —Polly, 22, Koreatown
AJW: It sounds like he is not your right mate, as his scent is wrong for you. He needs to find a girl that smells like a food that goes well with onions, like steak, or just about everything, except you.
RG: Keep It 100 and tell him 2 wash his ass….no love lost…. but u gotta wash yo ass first

Is it wrong to steal toilet paper from work? —Ivan, 28, Eagle Rock
AJW: Yes. Stealing will get you in trouble sooner or later, and toilet paper isn’t that expensive. Unless you have extreme social anxiety and can’t really handle going into stores where strangers lurk. If this is the case, if you give a homeless person who is soliciting outside the market enough money for a beer, he/she will go in and get you a roll, most likely.
RG: i have thought about this many a times haha (shout out 2 everybody i work with haha) especially when u down 2 that last young half a roll of TP but i try 2 avoid the trife life and just buy my

What is reality? —Mariah, 28, Echo Park
AJW: Reality is how you choose to see what’s around you, how you use your inside faculties. You are in control. Basically, it is your insides outside. Believe in all possibilities and be humble and kind. From there you will create a harmonious reality swirling around you. The birds will sing your song.
RG: Reality is whatever u believe it 2 be……Some peoples realitys are myths 2 others and some peoples myths are some peoples realitys

Why do I smoke so much weed? Is that ok? —Jesse, 26, Laguna Beach
AJW: It is never okay to do too much of anything, unless it’s sex. You may be smoking too much weed because you’re not inspiring yourself to be creative and productive. What do you like to do? Think back to childhood and try to remember what made you most joyful. Now, do it again. It could lead you to your right path.
RG: I Love the Herb (ask anybody that know _G) i say its ok

Can two people be in a relationship if they don’t like the same music? —Sally, 27, Los Feliz
AJW:Anything is possible. Say a guy loves to listen to sweet folk music and his girlfriend loves to listen to hard, thrashing metal music. This could indicate he wants to be dominated by her, wants her to tie him to the kitchen sink and whip him, slap him, punch him, etc. It gets him off, it gets her off. Differences can make for fun adventures.
RG: Yes they can sometime its good  it can bring a different vibe to your relationship like sometime i wanna listen 2 Suga Free(pimp shit) then i wanna listen to Art Ensemble of Chicago or Sun Ra two very different extremes but they make me a whole being and balance my vibe out. But i know my girl don`t wanna hear Suga Free and She might wanna listen 2 some shit i would never listen 2 Beyonce or some shit like that its a good thing i say

How do I know I’m not dreaming? —Sam, 23, Silverlake
AJW: You don’t know. This could all be a dream.
RG: How do u know your not in someone else`s dream and when they wake up your lifes over

My hippie boyfriend wants to have an open relationship. I love him and he says he loves me, but does it mean he loves me less since he wants to sleep around? Can “free love” coexist with real love? —Flower, 20, Echo Park
AJW: It sounds like he wants his cake and to eat it too. I’m not saying open relationships can’t work, but this sounds like he has the power and is selfish. He could be too insecure to be alone, and needs to have a girl waiting for him at home. Because he knows you won’t leave him, he is going to do what he wants and explore sexually with others. He best use protection. You best leave him and find someone who shares your idea of commitment. Respect yourself and never fall short of that. You’re only 20 and there will be many more loves you experience until one day, you may meet the one you want to spend the rest of your life on Earth with.
RG: U Should love that person more than ever he/she did’nt and does not lie to u so he/she respects u and cares enuff that he/she kept it 100 which alot of guys and girls would not do nowadayz  if he/she did`nt love u or care he/she wouldnt even tell u he/she was out sleeping with anybody  i have friends who have wives and multiple girlfriends and as along as everybody keeps it 100 with each other its never been anything but peace

If the world is going to end in 2012, why should I keep going to work? —Billy, 30, Pasadena
AJW: Who said the world is going to end in 2012? The Mayans? No, they didn’t. Grow up and take responsibility for your life. Nothing ends and nothing begins. Your life on Earth is a blessing. Do the job you said you were going to do before you got here.
RG: My homey mono/poly twitted a good response 2 this that i read last week he wrote”Its end of the world for the caterpillar and a new beginning for the butterfly” now i ask where do u stand?