Day 4 of SXSW was perhaps the most fun of all, and it began with the most delicious vegan peanut butter cup I’ve ever had. I washed it down with an agave wheat beer at the Spider House, where Norwegian noisers the Megaphonic Thrift rocked me back to the early nineties with their can’t-quite-put-my-finger-on-it nostalgic noise concoction. It felt like a couple dashes of Dino J, a pinch of Sugar, and a sprinkle of… what? The Meat Puppets? Tripmaster Monkey? Poster Children?

You know how the smell of pink sawdust can bring you immediately back to your elementary school hallway? This music was bringing me back emotionally to mixtapes and 120 Minutes on MTV in 1992, not in a dreamy haze but in an arresting, “wake up and FEEL this!” sensation that paired well with a good beer buzz to take the edge off. There was just a hint of boogie in the bass, and when these kids bobbed back and forth on the stage, their long hair billowed out in front of them like a freak flag flying high! I first saw the Dum Dum girls on this very same stage—maybe the Megaphonic Thrift will reach the same kind of giddy fame, but probably not, since they live in Norway.

Over on the Theater Stage, Alana Amram and the Rough Gems were laying down some heart-wrenching barroom country with just a tinge of Laurel Canyon decadence, even though they’re from Brooklyn. She poked fun at the Apache boys between songs with jokes about their far-out threads—the Apache wing of Burger Records knows Alana from her stint in power pop band the Fame a handful of years back, so I’m sure this ribbing would be considered the “good natured” kind. She’s changed a lot musically since those days—even just a couple years ago, I saw Amram with a slightly different line-up that included her sister and was a bit more rocker/singer-songwritery. But despite the fact that she still looks and dresses a bit like the female Marc Bolan, her modern Rough Gems has gone full-tilt country now.

After seeing Leslie Stevens two days in a row, it’s hard not to compare Amram’s brand of country to Stevens’, since it is in fact more or less the same brand: pedal steel, classic storytelling from a female perspective, and a rock rhythm section. But Amram’s voice, while not as strong or melodious as Stevens’, is a little darker, and so are her stories. She jarred me out of my sunny afternoon haze by commanding the audience to “Take a drink in your right hand, in honor of your mother’s man…”

The Badgers’ mothers are the voice of reason, but the Rough Gems’ moms are honky tonk ne’er do wells that the Badgers’ moms wouldn’t like. If these two country ladies were on a record of early seventies pop HITS, Leslie Stevens would be Melanie, and Alana Amram would be Suzy Quatro.

But the Dead Milkmen were calling. The fucking DEAD MILKMEN! And so we high-tailed it south to 6th Street and the East Side Drive In, where the lines were around the block! I was afraid we wouldn’t get in, so I found Steve MacDonald (whose band OFF! was playing the same gig) sitting in a van, and threatened him with bad album reviews for life if he didn’t try to get us into the show. But then the line started moving really fast, so I got in anyway and I wound up looking like a jackass. Sorry, Steve! But hey, you owe me one for not saying in print that you look like Dr. Ruth. 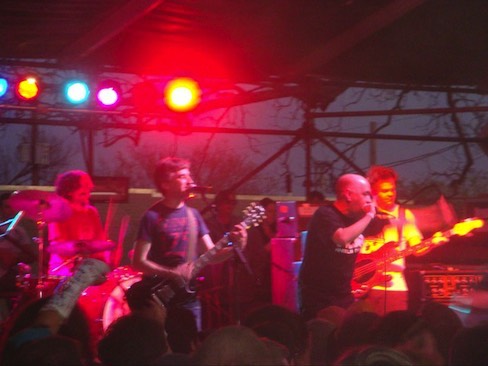 Inside the place, dance band !!! (Chk Chk Chuk) was on the stage. It may just be that I wasn’t in the mood, but really, do we need another Happy Mondays? Maybe we do. 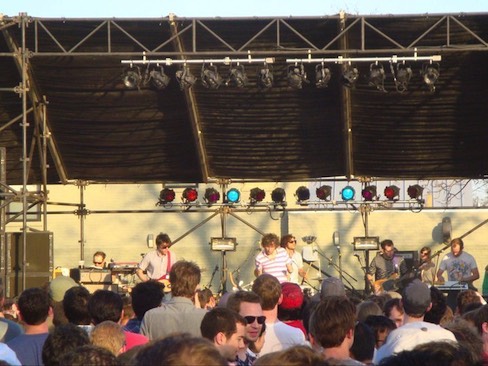 Thee Oh Sees were playing the lower stage, and wow, with proper sound and a big crowd, these guys are fantastic, actually BETTER than the hype they’ve been getting. I’m talking full-throttle rock and roll in a way that felt less hard, and maybe less tight, but more real and dangerous than the Riverboat Gambler’s set the day before, though both bands would do well on a bill together. Thee Oh Sees’s tunes went from Sonics-esque stompers to Dead Moon-esque throat-slitters to one or two Kiss-meets-Slade double-time anthems. And they brought their Californian fans with them! The aforementioned Mr. MacDonald as well as a gaggle of Smell-frequenters with Lamps and Growlers T-shirts were stomping their feet in the dust, as were L.A. RECORD’s newfound El Paso friends, who seemed to be having a jolly time that may have involved large amounts of alcohol.

The beer line itself was ginormous, and we were still in it when suddenly the strains of “Taco Land” hit our ears. The Dead Milkmen! For the second time in one day, I was transported back to the nineties, when I’d seen the Dead Milkmen play oh, about a thousand times in Oklahoma. Talking to them before a show at Ikon in Tulsa when I was 14 or so was a pivotal moment in my life, and off or on the stage, they were always a witty breath of fresh air in an era that had tons of irony yet perhaps not enough levity.

I was worried that after the death of bassist Dave Blood (who committed suicide with an overdose of pills just a couple years back), the fire might have gone out of their fun. But they and their bassist stand-in were in top form, making their old chestnuts like “Stuart” and “Punk Rock Girl” sound laugh-out-loud funny (or, okay, at least ear-to-ear grin funny) and captivating the thousand-strong throng despite all its efforts to become a nineties mosh pit. At one point, in the middle of a story that somehow tied together Austin, black people, and a rant against Zooey Deschanel that of course would become the intro to “Bitchin’ Camaro,” Rodney Anonymous caught a young Mohican gentleman just inches from a stage dive, put his arm around his shoulders, pulled him back and said, “Wait a second, you’ll love this part,” and continued to hold the impatient fan for the duration of his story before letting the young man crowd surf away.

It was a triumphant performance that reminded me how fun these songs are to listen to, and not just to laugh to. Like the Dictators, or Zappa, or even the Misfits or Descendants or pick-your-band, these guys have picked some observations of life to sing about that can be pretty funny, but laugh or not, the songs stand up, especially live, and maybe even more so! That’s why it made perfect sense for them to slip Gary Numan’s “In Cars” into their set.

And the night wasn’t even done! We skedaddled to Mohawk, where the Strange Boys proved that their lackluster performance the previous night really must have been a fluke. Or maybe they just wanted to live up to tonight’s competition—with everyone from Quintron to Meanside to the Woggles to Prince Rama on the bill—because they pulled out all the stops, with a lot of energy, great mewling vocals, and even a smile here and there! 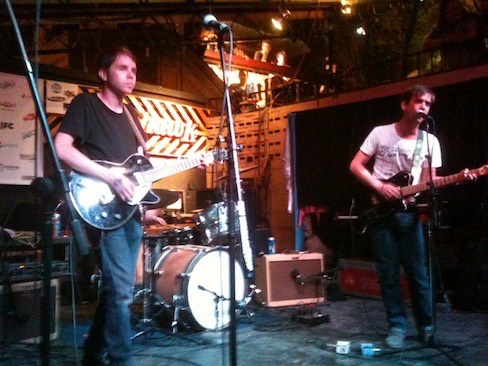 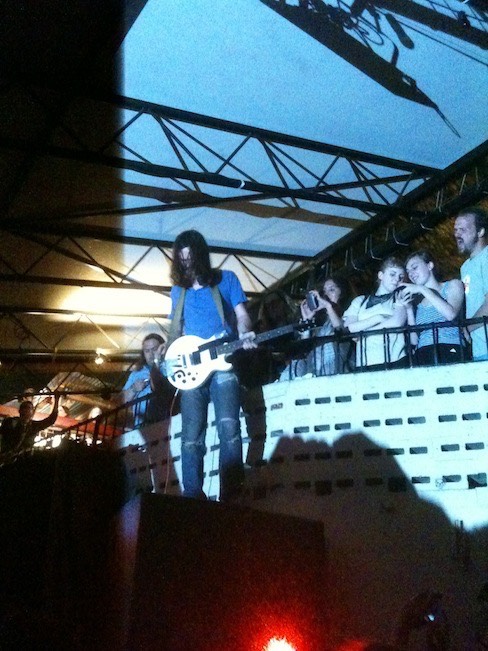 …. but Ty Segall may have been my personal point of pride of the evening—I’ve watched his career grow and blossom, and for a second, I almost felt like I had put the showcase together, like, “see how fucking GOOD this kid is??? This is MY kid!” Until I realized that really Ty has been an immortal rock and roll God since he was a teenager in Epsilons, and probably everybody here knew it. But for any newbies who may not have seen him before, they definitely left with his name on their lips. 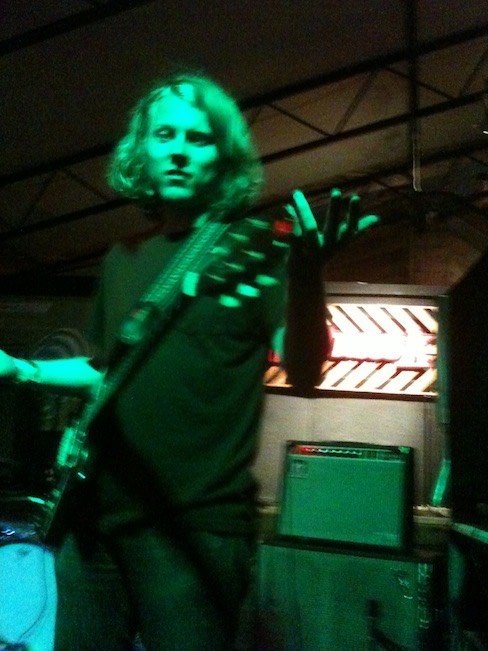 Because there were two stages, and strange quasi-English girl who was trying to make out with me because she thought I was in a band, I didn’t get to fully appreciate sets by Mean Side and the Woggles, which is too bad, because these fuckers were giving it their ALL, sweating, rocking, getting the crowd going, and all inside on a hot night when people would probably have rather been sprinkling ice cubes on their heads.

But I jettisoned the girl by the final hour of the night (or rather, she me) and was able to fully appreciate Miss Pussycat’s puppet show, which led up to the third Quintron and Miss Pussycat show of my life—probably only the second best Quintron show I’d ever seen, but the BEST Miss Pussycat puppet show, which revolved around an eerily appropriate magical pizza that had to get snuck past the cops, who finally received a beating and/or murder at the hands of some monkeys, or something. 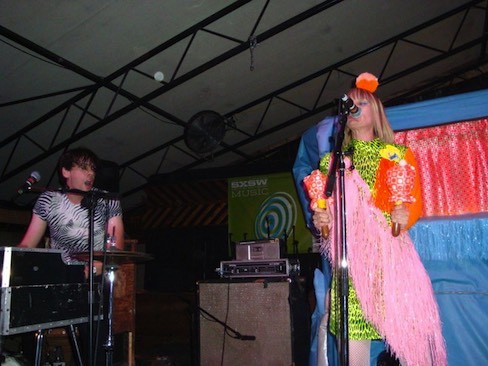 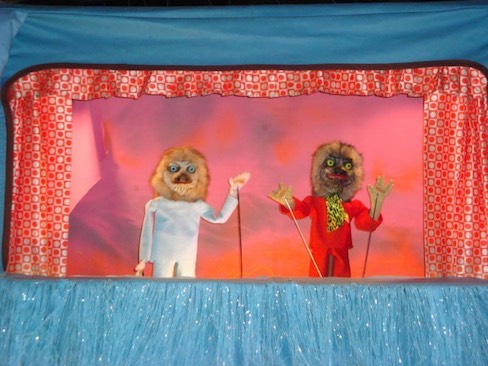 The actual music was wonderful too, though compared to the Strange Boys, Ty Segall, and all we had seen today—well, it was tough to live up to. Plus I couldn’t hear enough of the Drum Buddy in the mix, and I feel like somewhere along the line, Mr. Quintron has sort of abandoned the pure “keyboard as a noise tone” approach to his music in favor of more straight-ahead garage, which while wonderful, has about a THOUSAND old, new, and recently fortified competitors, some of them playing RIGHT INSIDE on the other Mohawk stage. I wanted to take Quintron aside and remind him that a little veer towards John Cale-era Tony Conrad simplicity on the keys wouldn’t kill him, and would be fitting to the manifesto I thought he wrote when he went “pop” in the first place.

But then again, maybe I was just cranky. I had been watching bands all day, I had blue balls, and sadly, it was the last show of the entire festival, which had been more fun than telling Blaque Chris to eat a bag of dicks. Things weren’t really over—but I knew the remainder of my time in Austin would be a wind-down, and that a real life without Milkmen, monkeys, and day-long music would soon begin again on a West Coast still tainted with radiation and budget crises. It was time to put down my beer and pick up a newspaper… er, but maybe not just quite yet!