Day one of SXSW started not with a bang but with a whimper… of DELIGHT, as I ate a delicious vegan tamale breakfast plate at Boulden Creek Café on South 1st Street, my first meal in days that involved actual protein and vitamins!

Of course, being a no-good rocker type, my breakfast started around 2 in the afternoon, so I missed Summer Twins and some other Burger Records goodies at Trailer Space Records, meandering into my parking spot just in time to catch a third day of Feeding People, who still had enough energy to blow the psych-o socks off the huddled masses yearning to drink beer amongst the rows of records in Trailer Space’s groovy little vinyl aisles. Sean and Lee from Burger asked me to DJ the show as an L.A. RECORD representative, but I was too scared: last year, Trailer Space head-honcho Spot’s spiteful OCD aggression freaked me out to the point where I actually was afraid that he’d throw a punch if I asked how much a record cost. But anyone who opens a record store in this day and age is going to be a nut ball, so this year I relaxed and just enjoyed the show, listening to the sun-friendly sounds of Jaill while sipping a free Pabst and thinking about the tragedy of Ronnie James Dio’s recent demise. 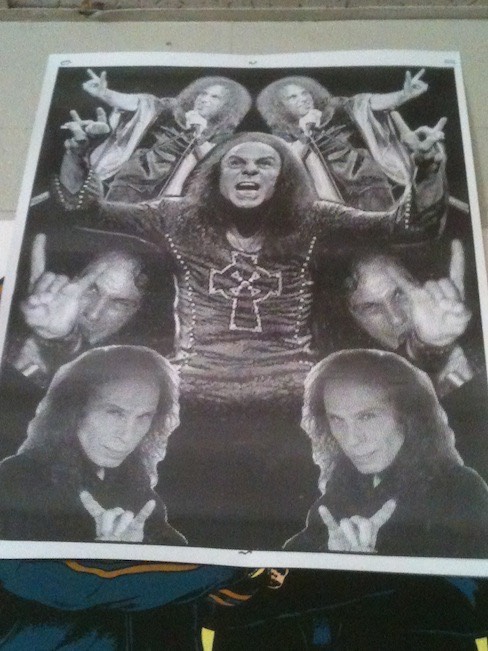 Later we caught the Echo/Echoplex showcase at Shangri-La, the highlight of which was definitely L.A. RECORD cover star and all around dreamboat Hanni El Khatib, whose guitar/drum duosity caused more mental fever dreams in just a few short songs than most bands cans muster in an entire tour, even making Danzig sound great by way of an inspired cover that came off neither as ironic nor as geeky, but somehow—amazing?

It was enough to set me off in the direction of L.A.’s death metal champions the Faceless, who were playing the Habana Bar Backyard Party. Some metal snobs find the Faceless to be a little, er, obvious. But little touches, like the Lee Ranaldo-esque backing vocals, give the Faceless that special edge. And live they pulled out the stops, with lots of evil energy and great Cookie Monster vocals, and mind-melting guitar solos that veered into real melody without pulling out of the death station entirely. I loved that like all brutal, corpse-chewing metal bands, they had an oddly sunny stage banter—did you know that “The Idol of Reality” was in fact a song made for people partying on Spring Break? That’s what the Faceless told me, with honest-to-goodness smiles on their Vitamin-B12 faces, before launching into another grim treatise on the festering demise of the human race.

We fled back west again on 6th Street just in time to catch a surprise free rendition of Kid Infinity’s live 3-D extravaganza, out of doors and even more trippy when projected onto a screen flapping in the windy breeze. 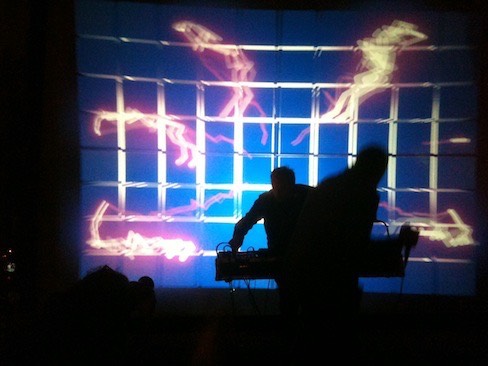 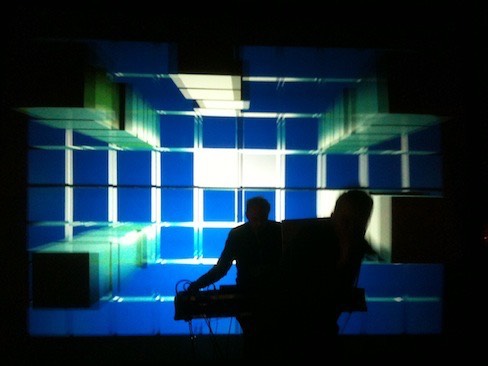 It was better than his L.A. performances, and the best thing we’d seen all night, until we turned to the back stage and caught an even more surprising last-minute set by Prince Rama. Damnit, these gals take the concept of “world music” and put everyone to shame who would even attempt such a thing—and that INCLUDES Dengue Fever. With just one glittery gal drummer (standing up, natch), and one glittery singer/keyboardist, Prince Rama took lyrics and culture straight out of a free Hare Krishna lunch in Santa Monica and made it trippier than Peter Fonda’s diary, but with a bent electronic slant that would make for a fantastic Manimal Vinyl release. To sweeten the deal (and make everybody’s acid kick into gear that much faster), they started the set accompanied by a smiling Indian dancer (well, fashion-wise, though my Hindu-studying cousin claims the dance looked a little culturally dubious) who held poses and knowing glances in front of the band throughout the first couple Sanskrit-heavy songs. It was a perfect ending to a perfect first day at SXSW, and for a brief moment, I wished I had three pairs of arms, so I could hug the night! 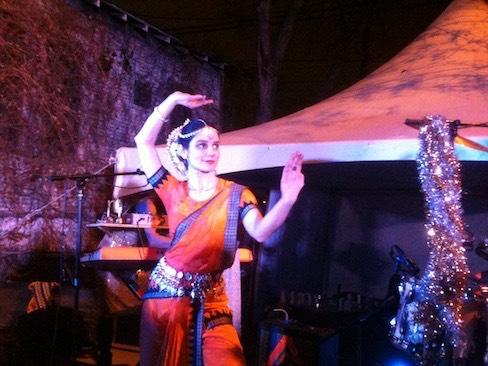 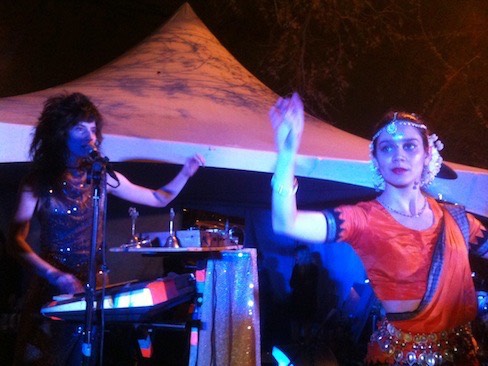