A big fat WARNING to party people crossing the desert—there is a checkpoint 90 miles east of El Paso, and they WILL stop you, and they DO have drug-sniffing dogs that will walk around every car as it stops. If you’re packing something you shouldn’t be, you’d best travel through during the busy daylight times and not hide your stash in an obvious place, like your guitar case (“Oh, they’ll NEVER look in my guitar case…”). They didn’t make me get out or search my car, but I have Jedi mind tricks that you don’t know about.

We plowed through the cop-heavy highways of Texas, including the beautiful 290, where the brewery-rich streets of Fredericksburg nearly pulled us off course like a siren song, and finally arrived in Austin in time to catch… what? Something? What’s going on?

“Psychic TV!” a friend texted me, and so in a jiffy we found ourselves at Elysium, which during non-SXSW times must be super gothicy, and even this night found me wondering about why the person next to me had two shiners, until I realized they knew the secrets of despair that only plum eye-shadow around the eye sockets could tell.

We missed the openers, but caught the end of ST 37’s set. Apparently these krautrockers from Austin have been doing it for twenty years, and their echoey guitar-melting performance reminded me of the Acid Mothers Temple show from last year’s Everloving showcase—it may not be the goth glory many of the audience came to see, but they had a lot of their fans with them and there was an optimistic enthusiasm that was a refreshing change from L.A.’s cold detachment.

Psychic TV hit the stage, and wow, I have never seen these guys live, so I was ready to expect anything: I did NOT expect them to wear matching leather jackets with patches on the back—like the Lords of Altamont! But I was impressed that Genesis P-Orridge didn’t make her bandmates set up for her, and was mucking about on stage like everyone else beforehand, setting up pedals and tripping over wires. Her shock of white poofy hair parted in the middle really made me miss my lhasa apso.

There was a lot of love in the show—Genesis had made signs saying “YOU ARE AMAZING, YOU ARE AUSTIN,” and aside from the runes and Sex Magick stuff written on the bands’ uniforms, it was like a real rock show, with blistering guitar solos and onstage banter about the tininess of the mic sound (“I want to sound MANLY!”). Genesis played electric violin with two bows at once, there were sound bite samples before every song, and when they told me they wanted to “eat my legs,” it really made me miss the folks back home—and the prices on merch reminded me of home even more. 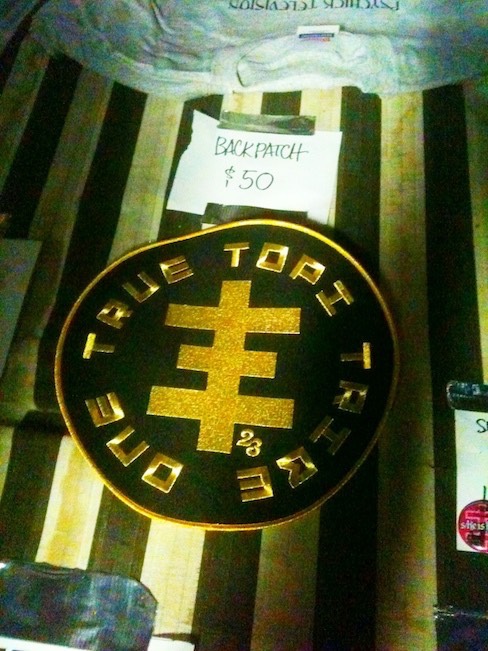 Afterwards, we stumbled through the detritus of 6th Street looking in vain for vegan street food, and heard a band playing a loud cover of Brian Adams out the window of a packed pub. Psychic TV may have gotten normal, but Austin continues to keep it weird.