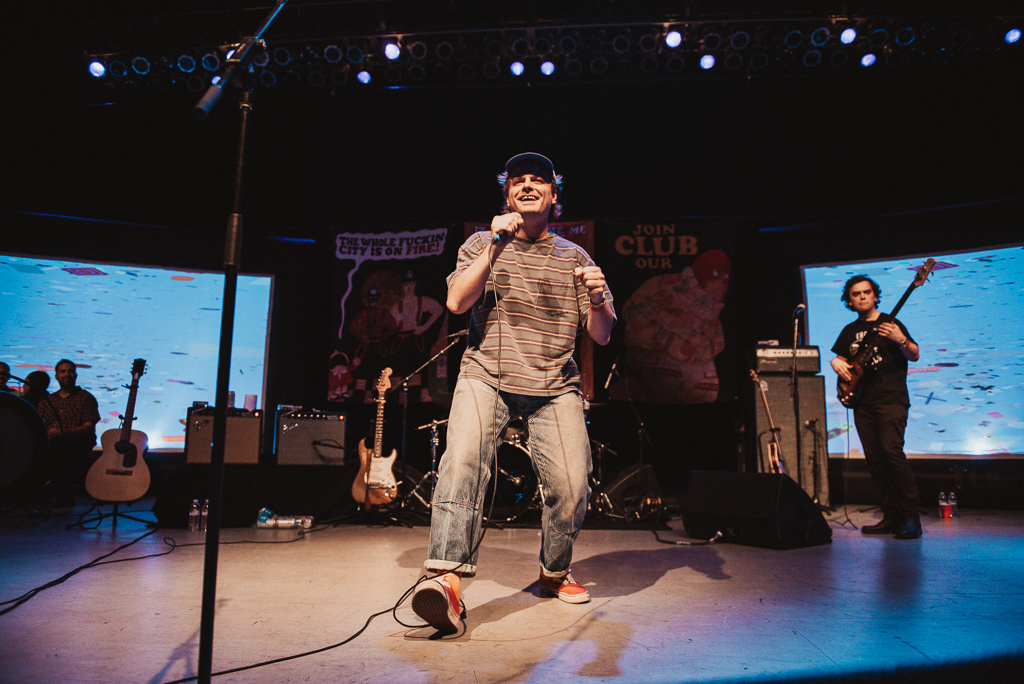 The last time Mac DeMarco played the Greek Theatre, he didn’t live in Los Angeles, but now he does. Last evening, DeMarco played the sold out Greek under a full moon to a dedicated crowd that has always welcomed him as an Angeleno. The laid back indie rocker is currently on tour in support of the release of his fourth full-length studio album Here Comes the Cowboy.

It was a celebratory night indeed. It was keyboardist extraordinaire Alec Meen’s birthday and we sang “Happy Birthday” along with the usual cast of friends and family sitting alongside them on stage. The show featured a number of tunes from Here Comes the Cowboy and not surprisingly, many knew the words. Four songs into the show, DeMarco welcomed comedian and fellow Canuck Nathan Fielder to the stage. Best known for his Comedy Central show Nathan For You, Fielder joined the band on guitar for the remainder of the show.

Bassist Jon Lent dedicated “Little Dogs March” to his dog Ella and before “My Old Man,” DeMarco did an impressive handstand and slapped his belly before we all sang (took a few times to appease DeMarco) “Uh oh, looks like I’m seeing more of my old man in me.”

Welsh singer and guitarist Cate Le Bon opened the show with a set of tunes from her new album Reward, released in May on Mexican Summer.

Setlist:
On the Level
Salad Days
Preoccupied
This Old Dog
The Stars Keep On Calling My Name
Nobody
Cooking Up Something Good
Little Dogs March
My Old Man
Finally Alone
Ode to Viceroy
Choo Choo
Another One
K
Freaking Out the Neighborhood
Rock and Roll Night Club
My Kind of Woman
Chamber of Reflection
Still Together