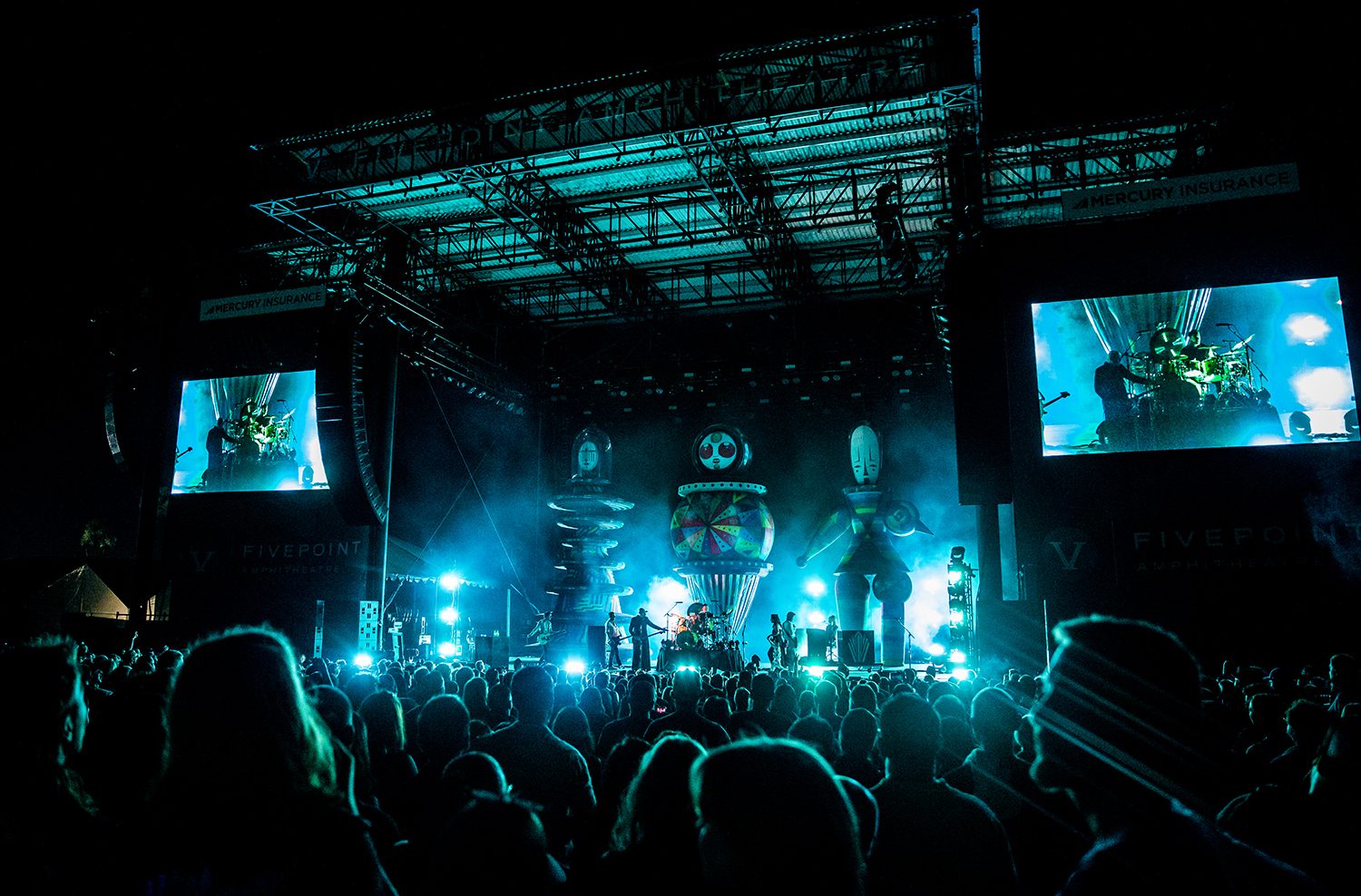 The Smashing Pumpkins gifted us with songs from latest endeavor Shiny and Oh So Bright, Vol. 1 / LP: No Past. No Future. No Sun with current lineup featuring all original members (minus a Miss D’arcy Wretzky) and guitarist Jeff Schroeder to the pop up venue in Irvine known as The Five Point Amphitheatre .

The set was reminiscent of those 90’s tours, specifically the Behold! The Night Mare tour. Giant inflatables adorned the stage and a goth Billy Corgan, complete with flowing black robe and a cross on his forehead played through the classics. Even if they have been doing the same set this entire tour, fans were treated to a few soundtrack songs normally left off the set.

“Eye” from the Lost Highway soundtrack had Corgan on just a mic meandering around the stage as he gnarled that it’s “not enough.” It was enough though for them to also dust off “G.L.O.W.”–a song they wrote for the Guitar Hero game franchise, and one that hadn’t been played on a tour since 2010.

If you have been to a Pumpkins’ show before, you never know what you are going to get from Corgan. Will he stretch a 4 minute song into a 20 minute grandiose explosion? Will he make an acoustic song electric? Well none of that happened last night. Everything was straight forward with very little noodling of guitars or long rants. At one point there was even a kid on stage, bright eyed and jaw wide open, watching Corgan from a few feet away. And in typically Corgan fashion, he didn’t mention it or explain to the crowd who it was.

Even without any instrumental surprises, we were left happy hearing the hits as they were recorded. “Disarm” in acoustic form, “Zero” in full snarl form, and concluding with “The Aeroplane Flies High (Turns Left, Looks Right) in full 10 minute jam fashion–because honestly, it wouldn’t be a Pumpkins’ show without a 10-minute rager. 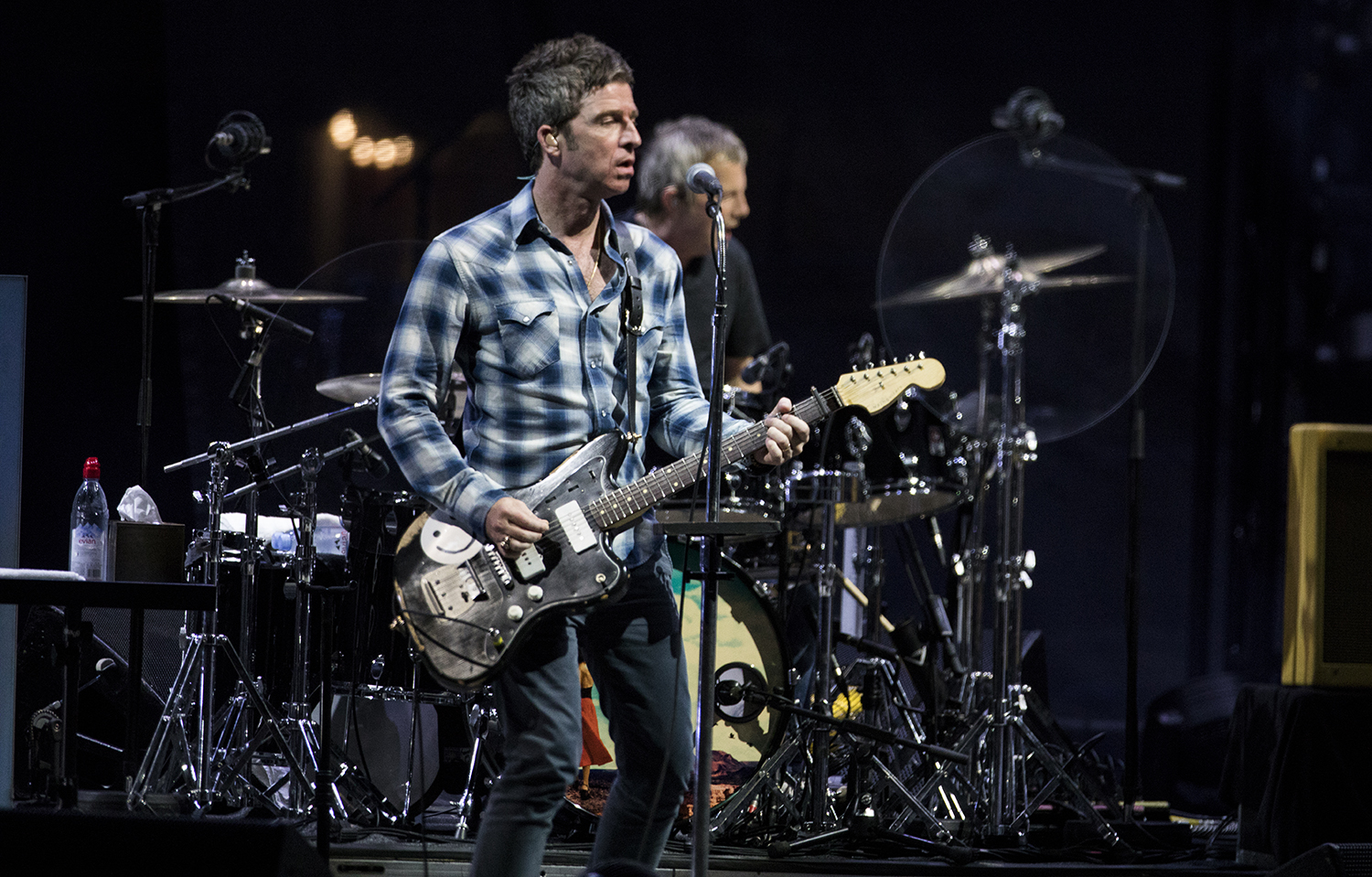 While Corgan didn’t have the witty banter last night, everyone’s favorite writer of Oasis songs, Noel Gallagher, definitely did. Along with his High Flying Birds, Gallagher immediately quipped, “Hello Irvine, wherever the fuck that is.” And with that the modern day Paul McCarthy pounded through a half set of his solo songs with his High Flying Birds complete with horn line and the now infamous scissor solo.

And yes, we were screaming for more scissors and a few even yelled out to hear a Foo Fighters’ cover. If you haven’t been following the news, Dave Grohl has started a petition to get Oasis back together. Based on what Gallagher had to say, highly doubt that will happen. “If the fucking drummer from Nirvana wants to get Oasis back together, he can come up on stage and suck my dick. I hope you sign my petition to get the Foo Fighters to break up.”

So while it looks like Oasis won’t be reuniting soon, Gallagher ended his set with a few Oasis classics like “Wonderwall” and “Don’t Look Back in Anger” as well as a couple deeper cuts in “Little By Little” and “Stop Crying Your Heart Out” from Standing on the Shoulders of Giants and Heathen Chemistry. We were also treated to a cover of The Beatles “All You Need is Love” and for four and a half minutes, everything was right in the world. 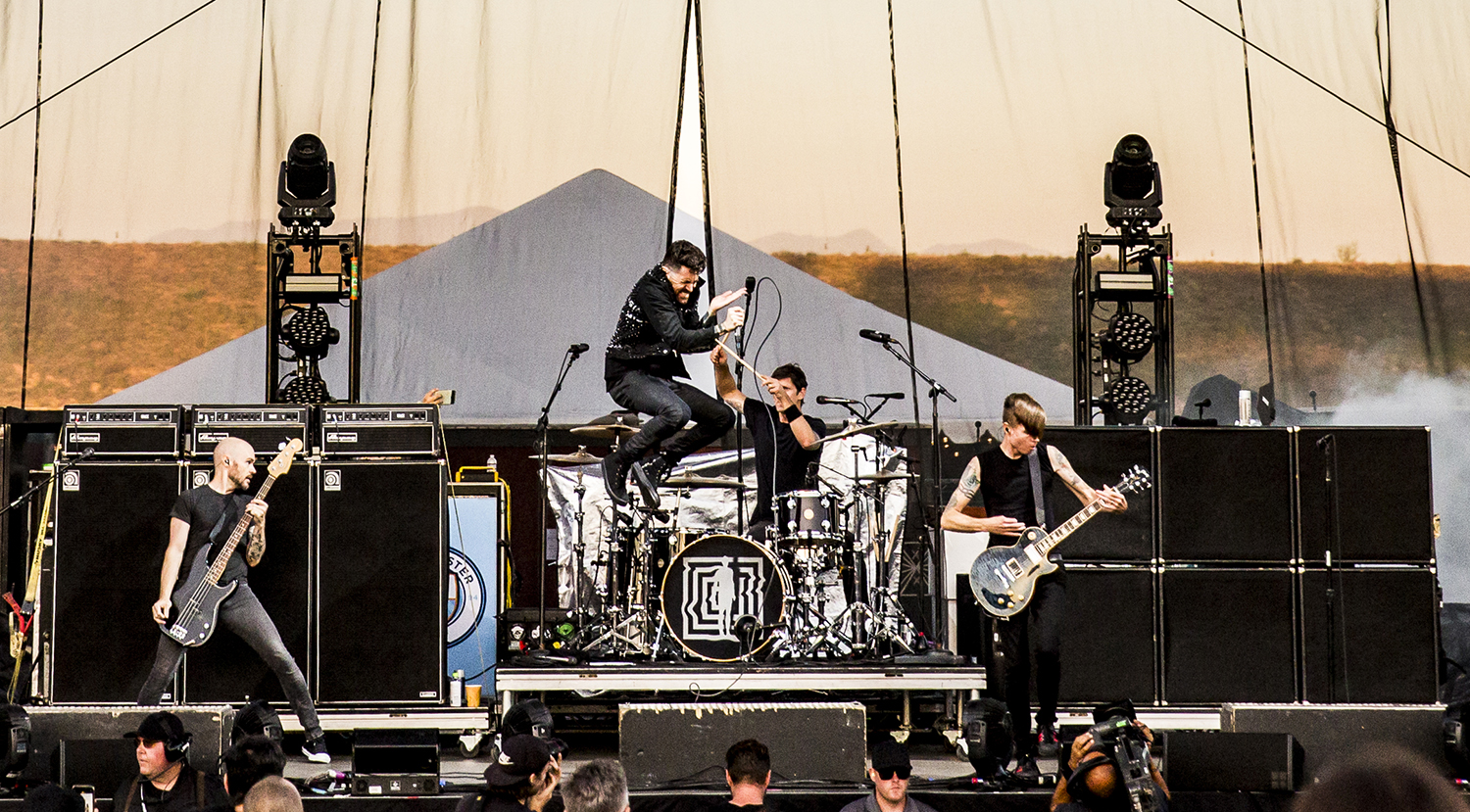 Starting the party was AFI, who blistered through their 30-minute set to a “crowd” of empty chairs almost 20 rows deep. It didn’t stop Davey Havoc and company from jumping, spinning guitars and taking over the makeshift pop up stage as the sun set on Irvine. The normal chanting of “through our bleeding, we are one” was missing from the start, but but surely everyone that was sitting in that pre-holiday traffic was yelling it from their cars.