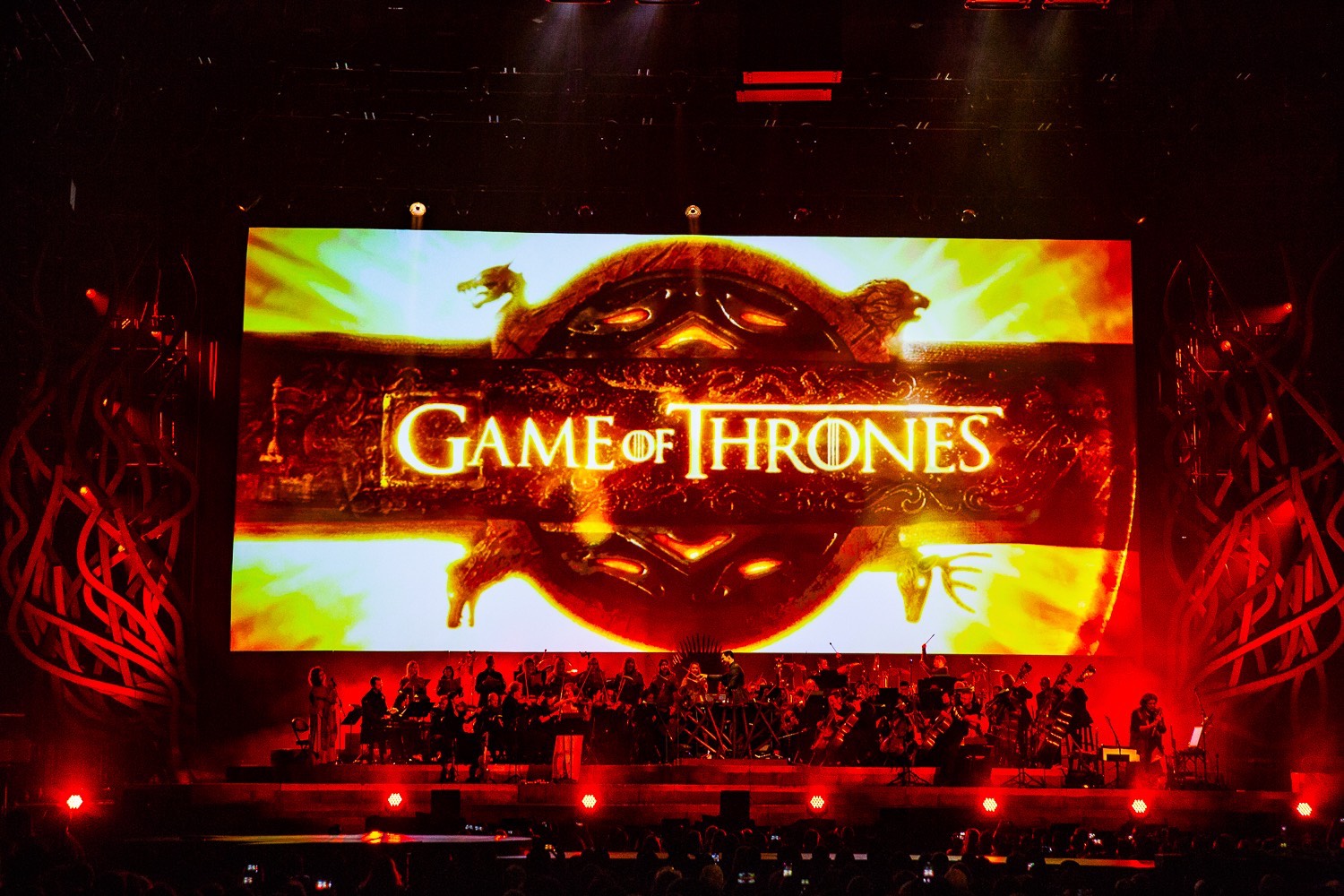 While we patiently wait for the 8th and final season of Game of Thrones (whenever that will be), many of us felt solace in attending the second installment of the Game of Thrones Live Concert Experience held once again at the Forum — this time, including Season 7 selections.

As the audience settled in, we heard an unusual announcement coming from the lit throne at center stage. A familiar voice cautioned to us to silence our cell phones or be “boiled alive in the blood of your children.” There was a collective chuckle as we recognized the voice of Cersei Lannister, one of the main villains in Game of Thrones and a favorite of many there to see the live Game of Thrones concert. Moments later, composer Ramin Djawadi took the stage in front of an appropriate GoT-styled podium. Hot off the heels of his well-deserved Emmy for Outstanding Music Composition, he asked us to celebrate the Emmy win with him and have some fun, and we definitely did.

Though you didn’t have to be a superfan to enjoy the beautiful compositions, talented musicians, and stunning pyrotechnics and stage design, it didn’t hurt to already love the franchise. People cheered and jeered for their heroes and villains every time they were shown on the main screen. But the real star of the night was Ramin Djawadi.

Behind the full orchestra and chorus were three screens, the large center screen projecting scenes from GOT to accompany the music and the two smaller ones showing close-ups of featured musicians. The first act introduced the most popular themes of the earlier seasons and most popular characters while featuring some of the most stunning visuals. 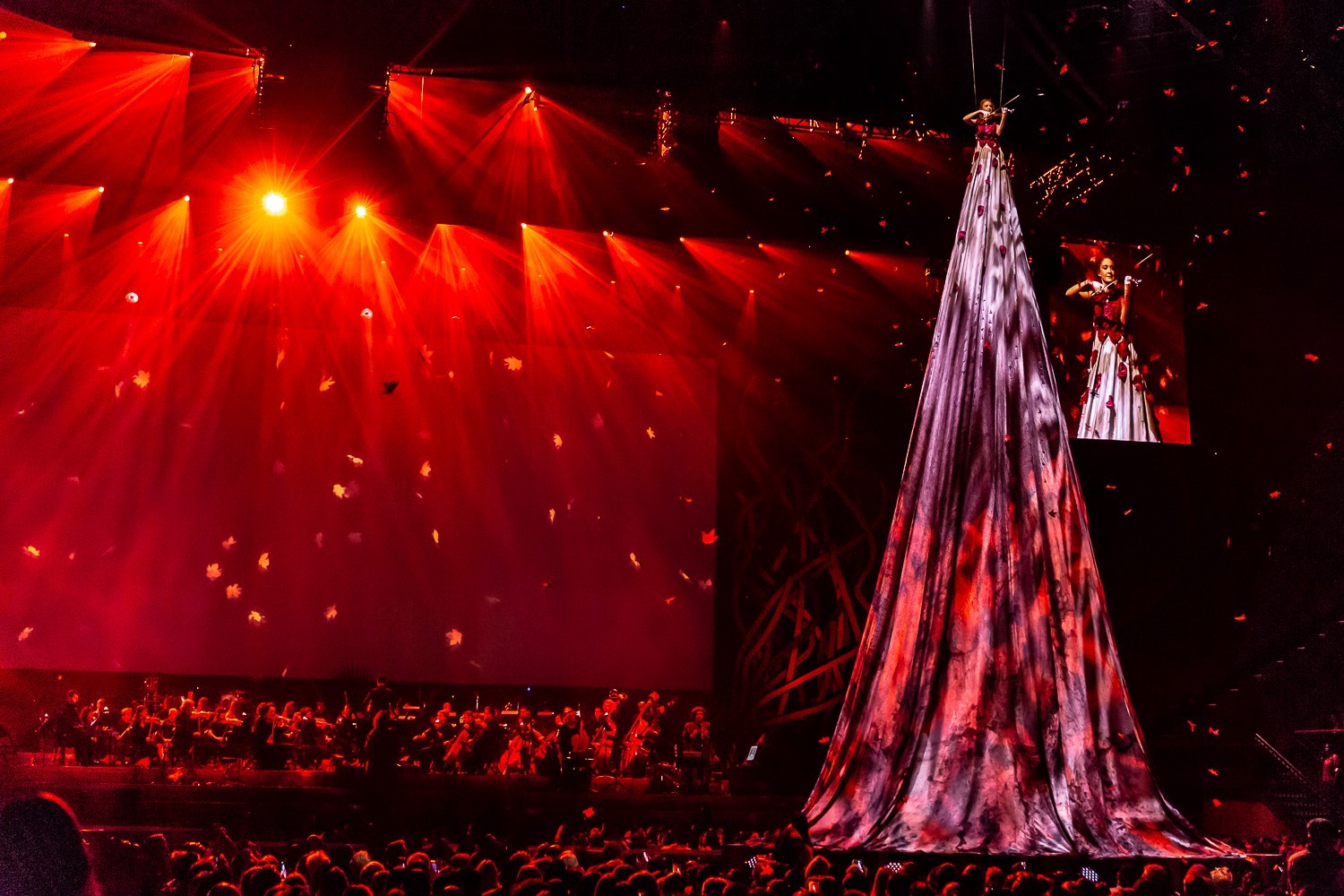 The show opened with an exciting rendition of the famous main title theme, but it was the second piece that really set the tone for how the night would go. It began quietly with the violinist playing a solo on the stage extension in a white gown, but as the piece grew to a climax, the soloist was lifted dozens of feet in the air, with her long skirt reaching to the floor below and red leaves falling from the ceiling. Another high point of came during the “Rains of Castamere” which featured simple, but beautiful vocals that primed the audience to tear up at the shocking Red Wedding scene which followed on the big screen. We will never forget that horrible scene!

After a 20-minute intermission (enough time to pick up a blue Night King themed cocktail at concessions for a mere $14), we were ready to return to Westeros. The second act brought new compositions from the latest season, including the new Emmy winning piece from the “The Dragon and the Wolf” episode. There was more emphasis on the show projected behind the musicians than the spectacle on stage during the second act. Rather than cut together montages, they showed nearly complete scenes, but that didn’t take away from the impact of the live performance. You could see the tension and despair in the Battle of the Bastards give way to the triumph of victory, but the live orchestra let you truly feel the release. The destruction of Baelor’s Sept was shown on screen, but the organ performance by Ramin, who was eventually engulfed in green wildfire smoke, completed the scene. 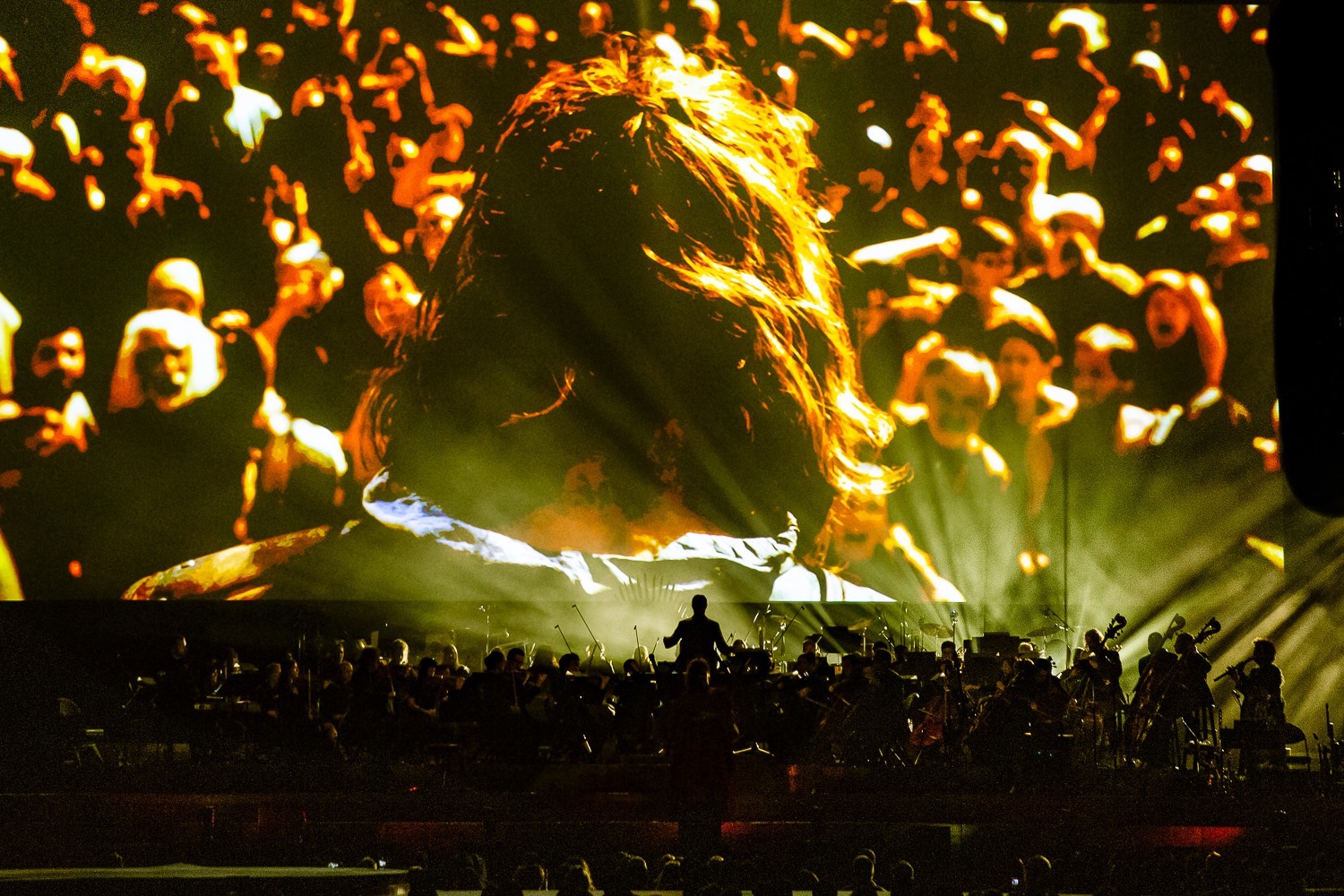 During the show, Djawadi said that he loved that the Game of Thrones scores let him use a wide variety of instruments, which you could see featured throughout the show. Djawadi himself took a break from conducting at different points in the show to play the organ, electric guitar and the hammered dulcimer, which he affectionately calls “Needle” as we watched Arya grow up and become the bad ass she is now. And every time the featured woodwind player was highlighted, he brought increasingly unusual instruments. After Dany’s theme, Djawadi pointed out the duduk and the almost comically large didgeridoo that the woodwind player used throughout the piece to help give her theme its mysterious sound. The show concluded with a slightly different composition of the theme song, but the musicians on all the screens as well it should be. A fitting In Memoriam was shown as the musicians walked off the stage with the audience staying to cheer for those evils thankfully lost and saddened for those like Hodor.

The show was a treat for the die-hard fan that already knew the music by heart and it was an eye opener for the more casual viewer. It reminded you that the intense emotional ride that GoT is known for is due just as much to the score as the performances on screen. The Game of Thrones Live Concert Experience made for a spectacular show which was, as Djawadi said at the end of the night – just so much fun. It surely has inspired a few people to rewatch the entire series, this time with a closer ear to the music.