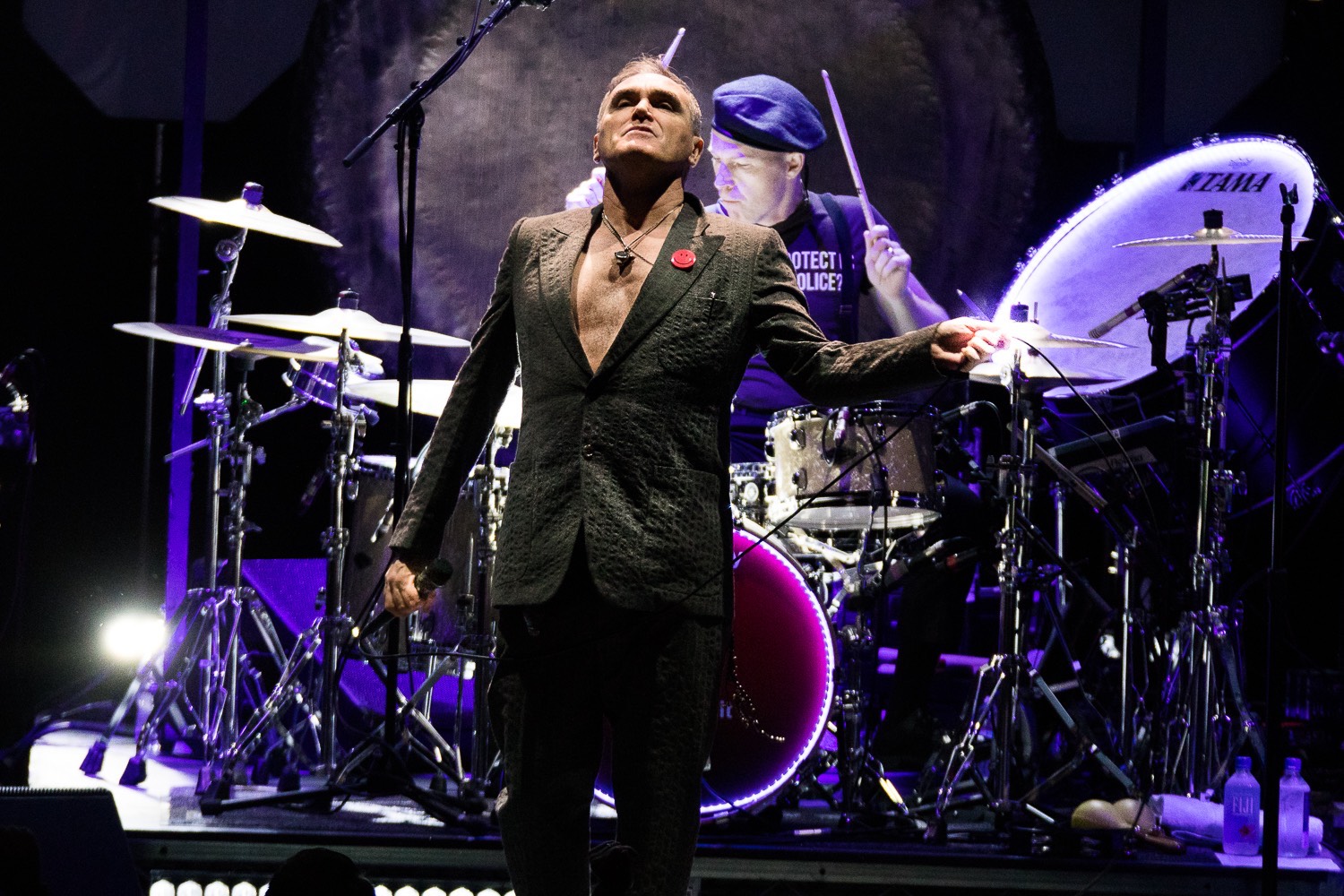 “California Republic-I hope I’ve lived up to my appalling reputation.”

Morrissey spoke these words at the start of the encore on Friday evening at The Hollywood Bowl. He lived up to what we hoped would happen and then some.

Minutes before Billy Idol took the stage as support, Los Angeles City Councilwoman Monica Rodriguez presented Morrissey with a plaque in a private ceremony at The Hollywood Bowl declaring November 10th as Morrissey Day in Los Angeles. The sold out crowd of 17,000+ waiting outside was all too ready to celebrate.

Billy Idol was the perfect musician to get the party started. The rocking 10-song set included “Eyes Without a Face,” “White Wedding, Part 1” and “Rebel Yell.”

When Morrissey walked on stage wearing a suit sans shirt, he was accompanied by his band who were all wearing shirts that read “Who Will Protect Us From The Police?” which is a new single from Morrissey’s new album Low in High School out on November 17th. This was one of the few songs off the new album not played during the show. Songs that were played included newly released “Spent the Day in Bed” and “Jacky’s Only Happy When She’s Up on the Stage.” 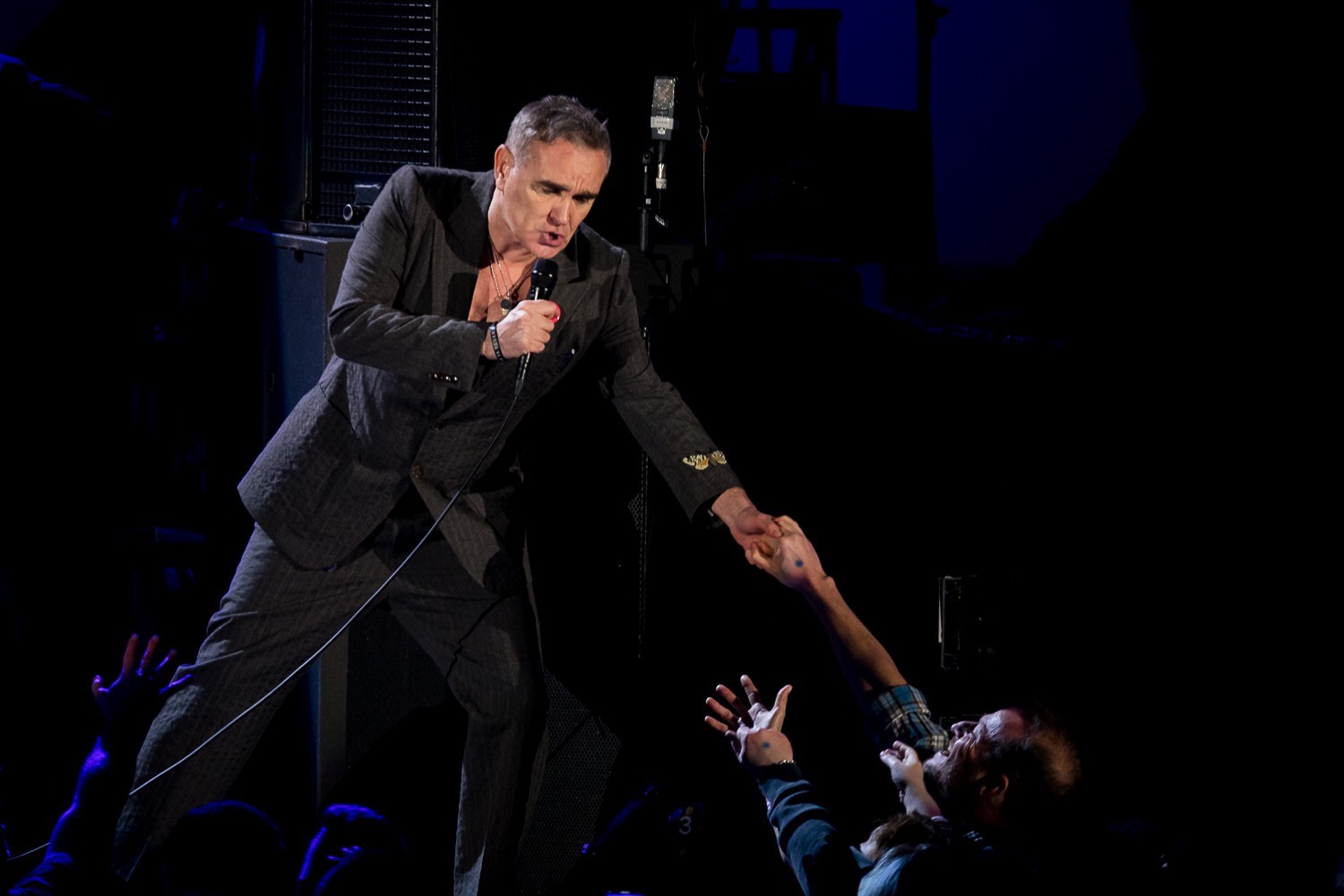 Speaking of Morrissey’s band, they are an integral part of the show. They include the familiar Boz Boorer (guitar/sax), Jessie Tobias (guitar), Mando Lopez (bass), Matt Walker (drums and whose kit read “McCruelty, i’m hatin’ it” resembling the McDonald’s logo) and Gustavo Manzur (keyboards).

From the opener “You’ll Be Gone” by Elvis Presley to Smiths’ songs including “How Soon is Now?” and Morrissey’s little grunts on “I Started Something I Couldn’t Finish,” “Meat is Murder,” it was a beautiful blend of emotional string pulling. When “Meat is Murder” ended-which includes a very disturbing film of slaughterhouses-a man in Terrace, Section 2 proceeded to scream “Stop with your political bullshit!” which makes one wonder if he was at the wrong concert as he knew nothing about who was on stage. Shouts of “Go home!” to him quickly silenced the heckler.

Unlike most Morrissey shows, The Hollywood Bowl only had a few stage crashers at the end and Morrissey threw his entire jacket out towards the end instead of the usual shirt that is ripped to shreds by fans. He was gracious throughout, shaking hands with excited fans in the front row.

Morrissey’s humor was sprinkled throughout the show but still got his political and humanitarian points of view across through his music and visual aids. The encore included “Suedehead” and ended with a large photo of Morrisseys’ cover of Years of Refusal where he holds a baby. The baby’s head was replaced with a Trump head for “Shoplifters of the World Unite” where lyrics were changed to “Trumpshifters of the world…”

Morrissey’s voice is what stood out above all. The new songs sound much like Moz of yesteryear and album sales should be high. He showed up. He is Morrissey.

Setlist:
You’ll Be Gone (Elvis Presley cover)
I Started Something I Couldn’t Finish (The Smiths song)
Glamorous Glue
I Wish You Lonely
Jacky’s Only Happy When She’s Up on the Stage
Kiss Me a Lot
When You Open Your Legs
How Soon Is Now? (The Smiths song)
Spent the Day in Bed
The Bullfighter Dies
Jack the Ripper
Home Is a Question Mark
My Love, I’d Do Anything for You
I’m Throwing My Arms Around Paris
Back on the Chain Gang (The Pretenders cover)
All the Young People Must Fall in Love
Speedway
World Peace Is None of Your Business
Meat Is Murder (The Smiths song)
Everyday Is Like Sunday (Tell Me Cuando Cuando Cuando)
Encore:
Suedehead
Shoplifters of the World Unite (The Smiths song)