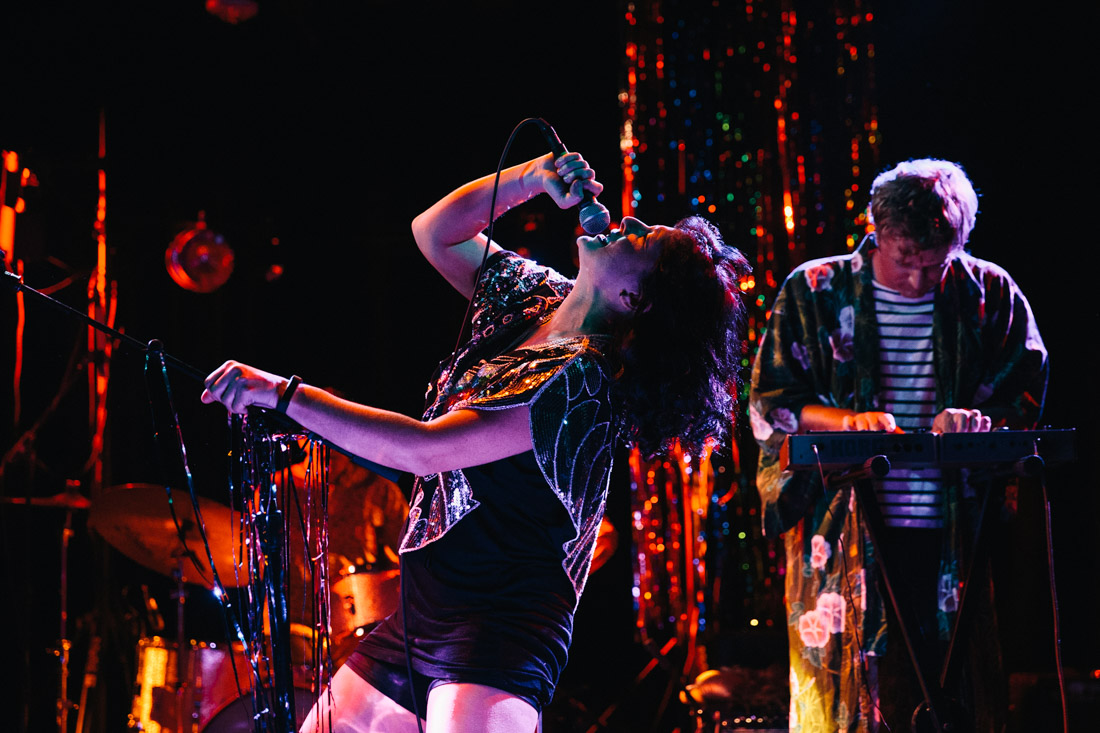 The fourth night of Bloody Death Skull‘s residency featured a stage draped with metallic fringe in every color and epic performances by BDS, Chrome Canyon, L.A. Takedown and r.r. barbadas. The headliner’s frontwoman [and L.A. RECORD editor!—ed.] Daiana Feuer said her stage decor was meant to look like “a pinata threw up on stage.” It was very pretty the way the lights hit the shiny rainbow curtain surrounding the bands, probably the prettiest vomit that has ever graced the Echoplex stage.

BDS had eleven players: three microkorgs, two horns, two girls on the floor playing toys, drums, bass, guitar, and electric ukulele. The songs had the swing of early rock and soul, but taken to this hallucinogenic height as if the school dance has been invaded by aliens. Both Chrome Canyon and L.A. Takedown played music reminiscent of grand movie soundtracks that your imagination could fill in with interstellar chase scenes from some kind of neo-futuristic alternate version of Miami, sprinkled with John Carpenter. Shrouded in haze, every time Chrome Canyon’s Morgan Z took up the theremin, it sent goose bumps all around the audience. Another thing Chrome Canyon and L.A. Takedown had in common was their mastery of guitarmony—that’s multiple guitars joining forces on the same riff. It was beautiful, especially when L.A. Takedown’s three guitarists merged into amazing tornado of cascading notes. Opening duo rr barbadas played a dreamy sort of experimental dance music. Rona’s voice has some Bjork-like qualities, and the songs were both meditative and body-movers. All in all, a great night full of surprises.