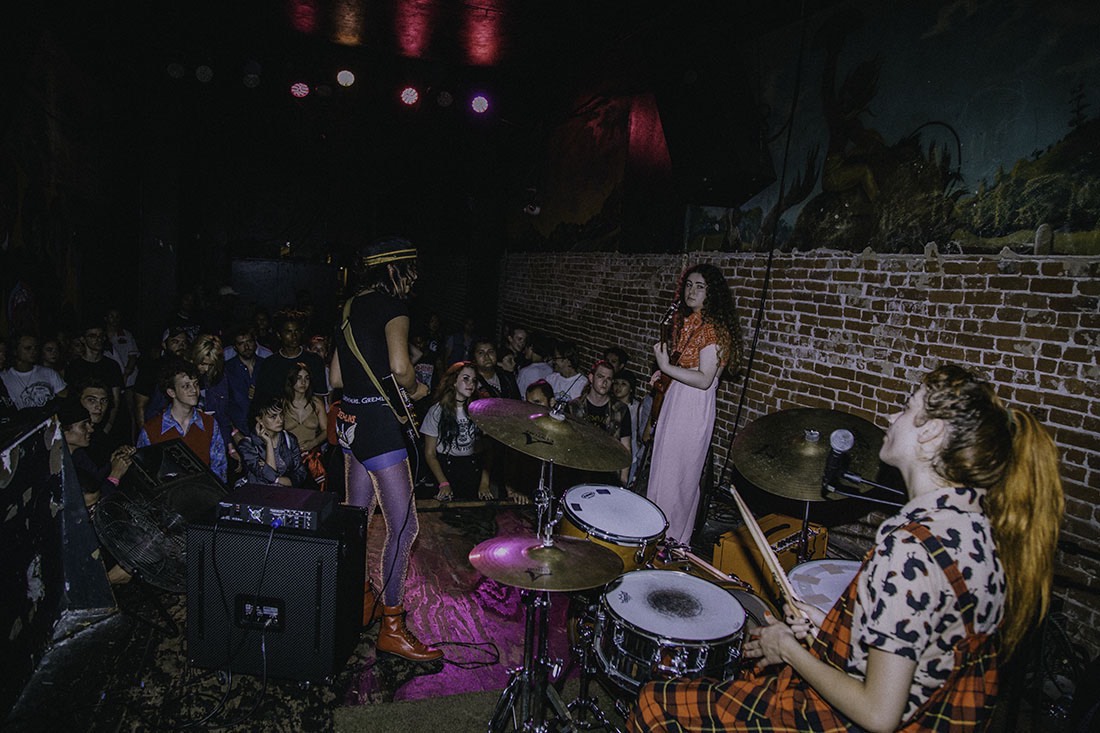 Attending a show at The Smell is like being at the beginning of a Behind The Music documentary. The black and white part. The part where the band is living in a shitty apartment, playing shitty clubs, and meeting the people that will eventually be their shitty first divorce. As you stand in the tiny, brick-walled, urine-scented venue, you feel like you discovered something. No matter how far those bands actually wind up going, you always feel like it could happen—and that you were there before it did.

What was discovered last night was a crew of female-led, LA bands—all hawking different styles, but the same effortless attitude. Momma took to the stage in matching jumpsuits, their Girlpool-esque, melancholy, bedroom songs like “Alopecia” and “Surfboard” matching their mellow stage presence. The between-song banter of Etta Friedman and Allegra Weingarten sounded like they were talking to their friends at a sleepover, relaying with wide-eyes the story of the “blood-curdling screams” they heard at 3am last night, before launching into the rest of their grungey set. 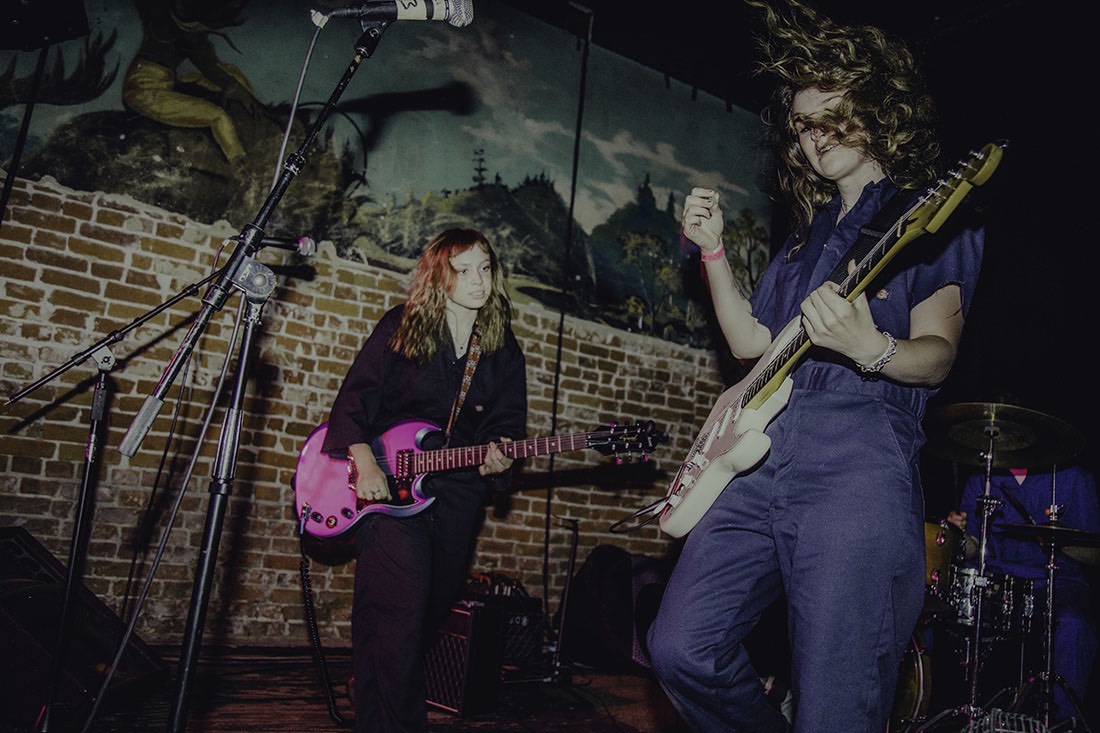 Next up was Celebrity Crush, with bassist Violet Romero and guitarist Jesse Korson trading vocals on lo-fi, post-punk tracks that sound exactly like being a teenager. The intricate guitars and detached vocals were accented with some unexpected violin and even trumpet, hinting at the fact that these kids have an ear for arrangement and sights set beyond The Smell. 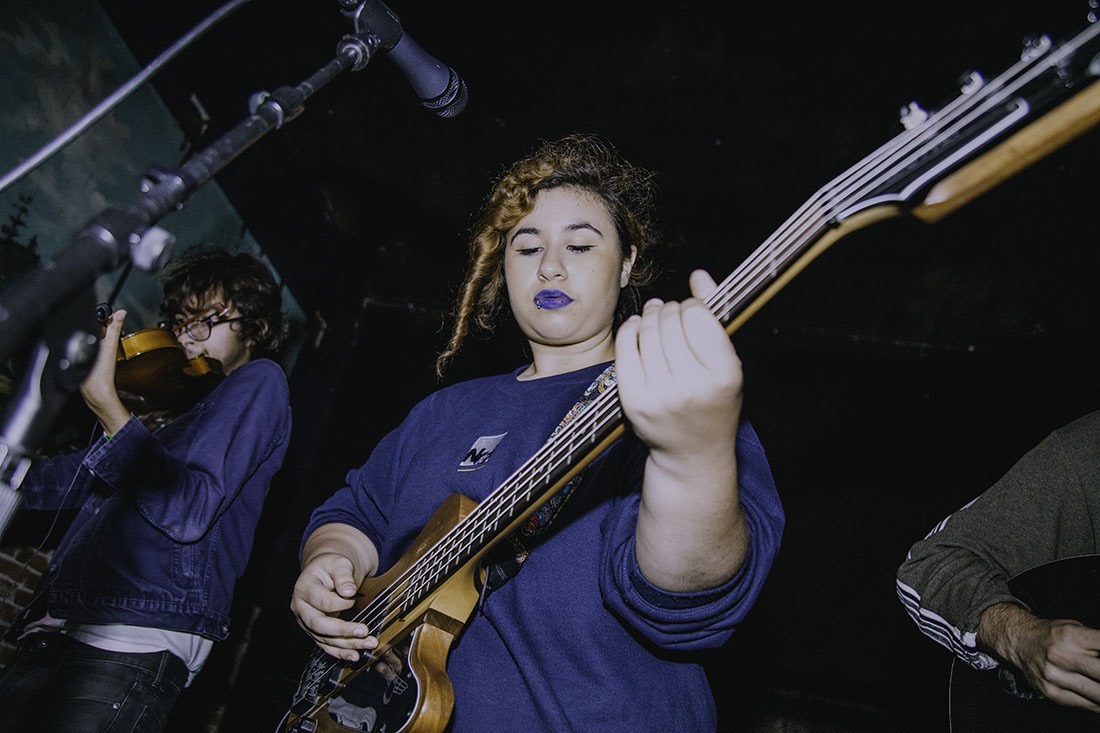 Headliners Pinky Pinky are the newest darlings at hip, indie label Innovative Leisure, releasing their first EP earlier this year to a warm reception by various purveyors of cool. The trio looked the part in their vintage/thrift-store garb with bassist Eva Chambers wearing what looked like a bell-boy hat and a pair of hot-pants with “Gremlins” across the bum.

Pinky Pinky mix a classic, hard-rock sound with the garagey, unrefined edge of youth. There’s a strong 70’s reference going on, especially during the impressive, but suspenseful instrumental jam sections—suspenseful only because you could see the concentration on all of their faces. And yet, there’s something that feels totally new. 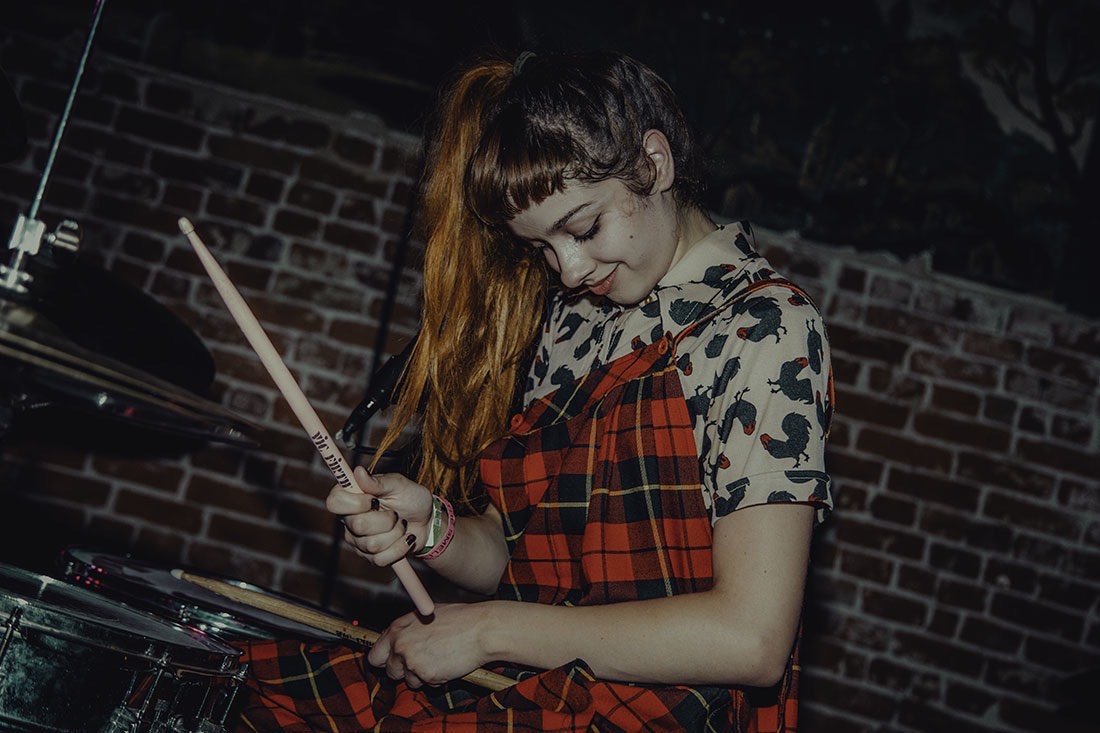 Take the girl-group, horror mash-up of “Spiders,” which started a tiny but stoked pit, or the Catholic bad-girl rumble of “Hot Under The Habit,” which saw that same spirited group lift a kid right off the ground. Out of the eight-song set, it was clear the EP songs were the strongest, and the most rehearsed, with guitarist Isabelle Fields running through her licks like an old pro and drummer and vocalist Anastasia Sanchez’s unique, beyond-her-years bellow finally coming through loud and clear.

Perhaps due to concentration or due to their inherent and impenetrable cool, the crowd before them was only addressed once, with Sanchez asking “Are you guys hot?” It wasn’t until “Ram Jam”—another EP track and the last song of the set—that they finally let loose, with Sanchez wailing out feral screams right into the mic.

As Pinky Pinky left the stage, a still-dazed kid could be heard saying “That was so groovy,” right before getting body-slammed by his buddy. Ah The Smell, where everyone’s pants are too short and everything’s alright.

The show was opened by Rose Dorn.