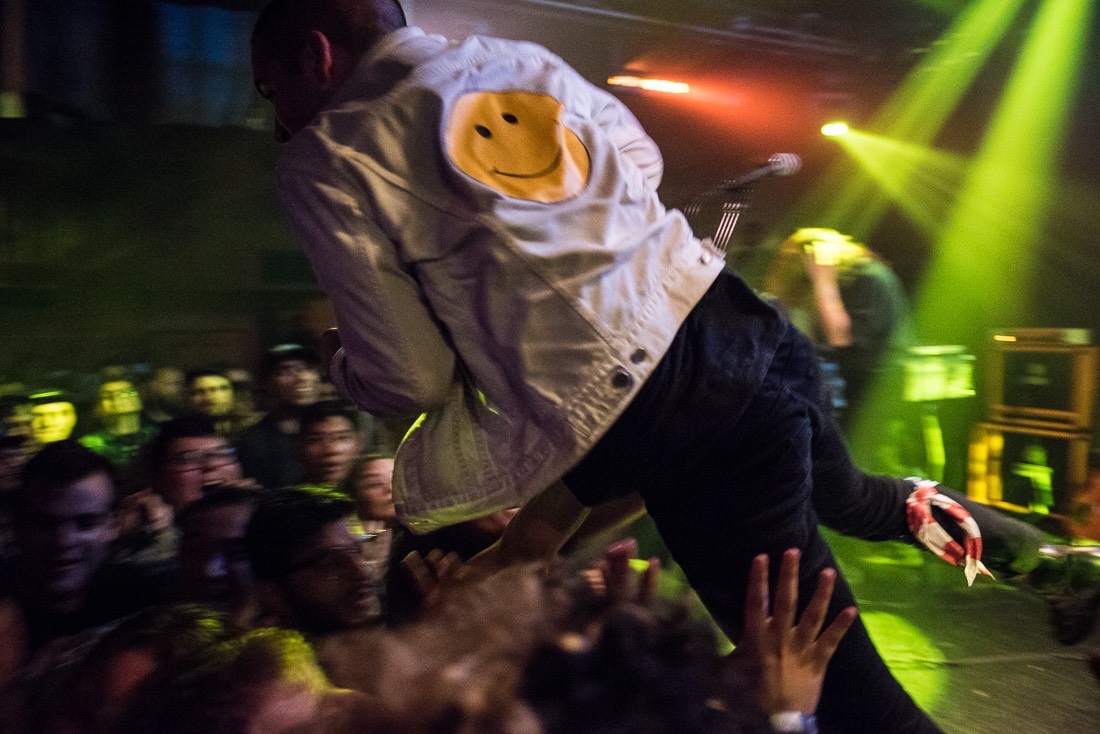 With that proclamatory album, the Louisville, Kentucky rockers took their sound out of the garage and into stadiums—trading in speed-freak punk for a more muscular, classic sound that draws on the last era when rock was pop. Think Thin Lizzy, Cheap Trick, Van Halen, and even KISS.

What that added up to last night was a wall-to-wall, gasoline-soaked set filled with fat riffs, enough heart-rattling energy to power all of West Hollywood, and a lot of very sweaty dudes. “Scoot the fuck up!” frontman Tony Esposito said as they took the stage, with keyboardist Ryan Hater raising his arms up like a prizefighter—firing on all cylinders right out the gate with “Last 4th of July” and “Pills”. The old favorites provided a perfect contrast to the one-two punch of “Little Silver Cross” and “The Stack”—new tracks that made it impossible to ignore how much better they’ve gotten in between records. The songs are catchier, the songs are bigger, and damn the band is tight—the kind of tight that can only come from being anchored by a DNA-sharing rhythm section (twins Nick and Sam Wilkerson).

After the irresistible crowd-favorite “Sheila”—otherwise known as Espositio’s exercise in mutating the word “heart” with his snot-rocket sneer until it no longer sounds like part of the english language—came the sweet, 70s, harmonizing guitars of “Eagle Beach,” and “Judy French,” which sounds so much like 1981, you would swear Reagan just got elected. 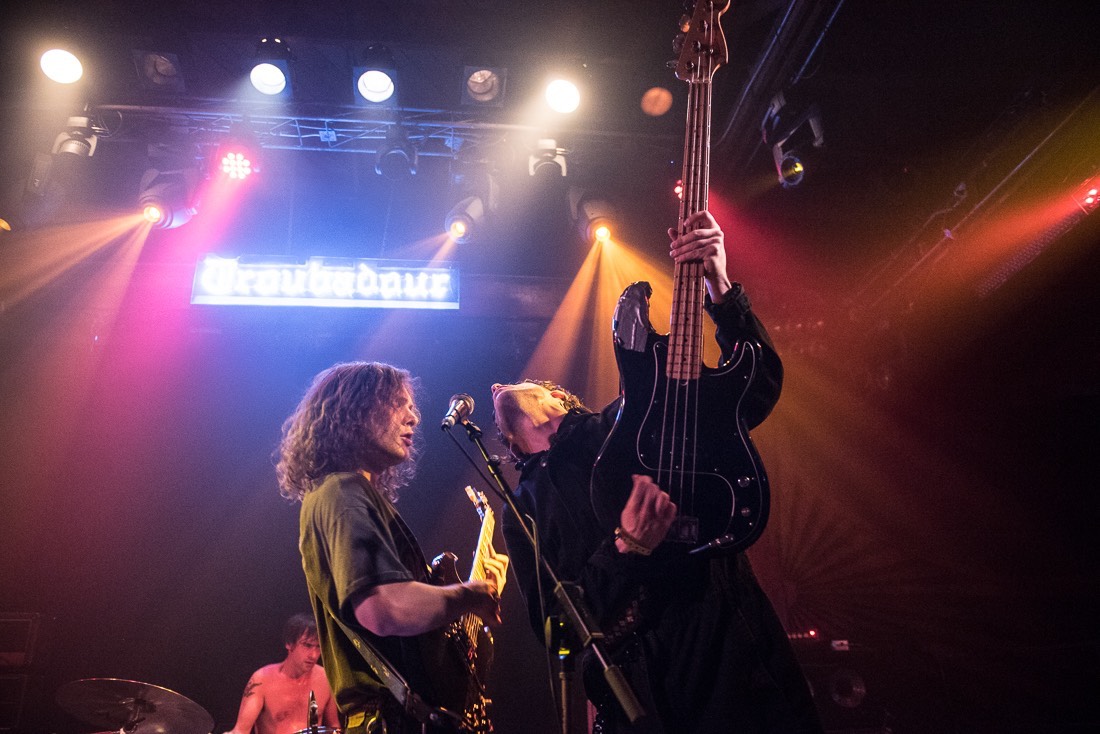 The last four songs were an all-out sprint to the finish line—a relentless onslaught of pop-punk guitars, Hater’s life-giving keyboards, and the fulfillment of Esposito’s request to “see someone fall on top of someone else tonight.” After a quick interlude of Joe Walsh’s “Life’s Been Good” came the Ramones-obliterating “Another Day,” then the AC/DC hugeness of “The World’s Best American Band,” with Sam Wilkerson holding his bass up in the air as an offering to the rock gods right before the epic key change. By the time they got to “B.T.K.” and “Half Bad,” Nick Wilkerson was down to his boxers, Esposito was practically foaming at the mouth, and a very happy kid was singing every word and playing air guitar, as his Sk8-Hi Vans bobbed up and down above the crowd.

So are they “The World’s Best American Band?” We all know it’s a long way to the top if you want to rock ’n roll— but they’re definitely on their way.

Obviously a tough act to follow, Ron Gallo held his own by doing something completely different. With an offbeat sense of humor, Gallo led the audience through a pastiche of spoken word, instrumental jams, covers (like a snippet of Des’ree’s “You Gotta Be”), and the heavy mix of psych, garage punk, and scuzzy fuzz of songs like “Kill The Medicine Man” and “Put The Kids To Bed” from his album Heavy Meta.

Gallo’s oddball style anchored the show, with him introducing a song called “I Want To Die” by insisting, “It’s positive,” frequently jumping down from the stage to run laps around the venue including the upstairs area where you could see amused members of White Reaper through the windows laughing, and leading everyone in an “Om” chant to get centered before the blistering “Young Lady, You’re Scaring Me.” The off-kilter charm was balanced by the musical prowess of his trio, with bassist Joe Bisirri and drummer Dylan Sevey masterfully navigating jams, freak-outs, and a guest appearance by Kat Milk Blu. 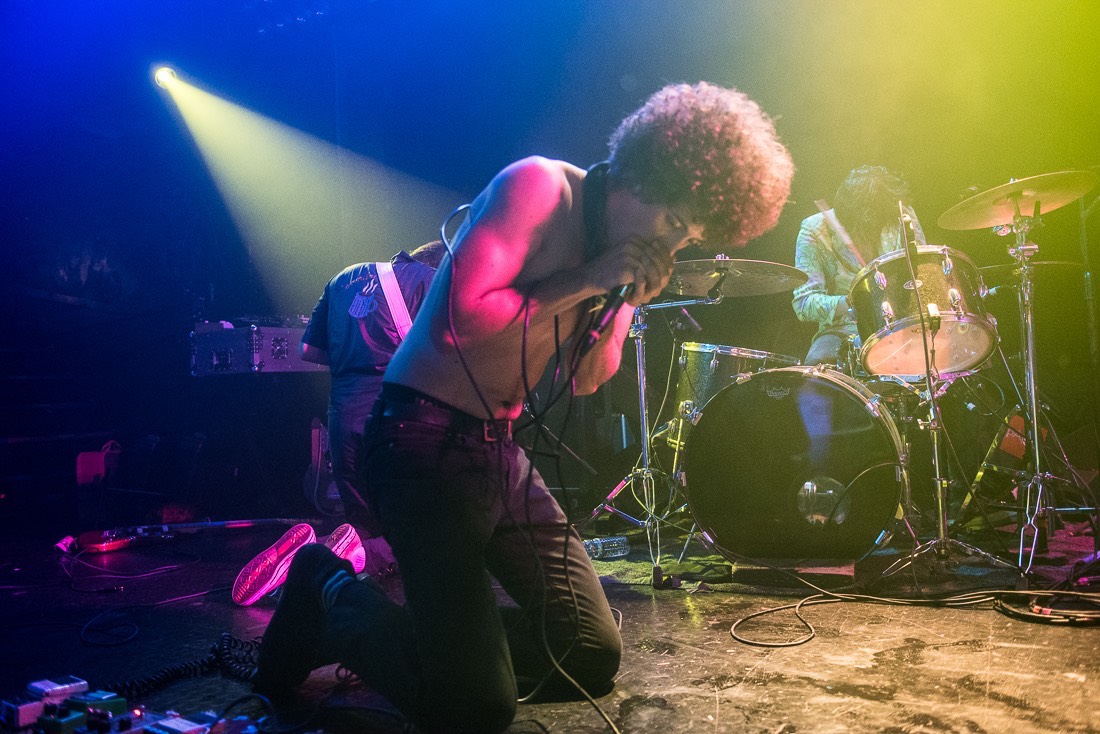 Gallo dedicated a new song to women all over the world, called “Entitled Man, Keep Your Hands Down Your Pants,” which had all the anger and fury of the heaviest garage punk, but the wordiness of something else. You don’t want to say Bob Dylan—with all that curly hair it’s an obvious comparison— but Gallo does have an air of “The Prophet” around him, the street preacher, the funny but angry young man who has a way with words. Take “All The Punks Are Domesticated,” where Gallo had the crowd completely hypnotized with lines like “Every room is sterilized/ All risk is paralyzed/ The pop tarts climb the pop charts/The blood clots block your heart parts/ And no one really has anything to say.”

Hailing from Nashville by way of Philadelphia, Gallo was surprised with the size of the crowd, saying “No one’s supposed to show up the first time you play a city. What the fuck? This is great!” It probably shocked him even more when the crowd called for an encore, as Gallo, now shirtless, ran back to the stage for a rendition of “Helter Skelter” that could have woken the dead.

The show was opened by Naked Giants.