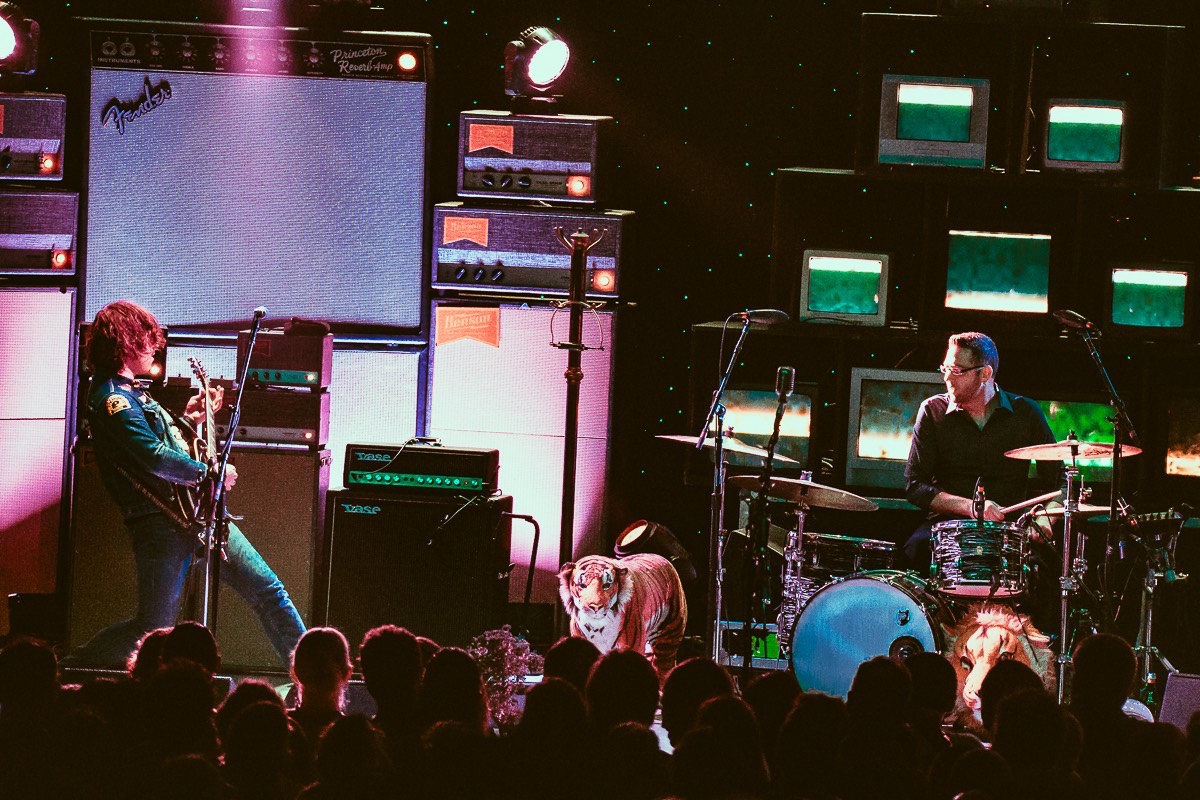 Before most everyone took their seats to hear the beautiful music of Ryan Adams on an evening where only a denim jacket was needed for warmth, the lines at the merch booths were quite long. And with good reason. Ryan Adams has some of the best merchandise.

A t-shirt that reads “Generic Ryan Adams T-shirt – I am with √ boxes for Not Doing So Great, A Glutton For Punishment, A Secret Goth, At The Gym Crying, On This New Medication, Satan, “Winging It,” and Only Into His First Album.” Another one that read “I ♥ Ryan Adams because I worship Satan.” You could also find this on a tote bag in case you didn’t need another band tee. A great selection and one-of-a-kind posters printed for each venue. A few fans were sporting Adams’ x-mas cat sweater to keep warm.

Once everyone was seated in the packed venue with their beer, wine and merch, Adams came on with the Unknown Band to delve straight into songs and stories of heartache and longing and we ate it up. The sound throughout the entire show was perfect. And yet, as soon as we were crying into our beer and wine, Adams would have us laughing between those songs of anguish.

Adams lives in LA so he hears about how some concert goers in this city kind of stand around during a show not doing much to which he replies “Yeah, but have you tried our weed before?” Good point.

Although his band is referred to as the “Unknown Band,” they are definitely known now as Adams didn’t casually introduce them.

Well, Totally Todd might possibly be having a baby with his wife Katy (La Sera).

“Do you think that Katy is going to have the baby tonight or tomorrow?”
“If we all hit the brown note.” That led into a funny conversation or whether people laughed and got it or they might have taken jazz at Berkeley.

“On the bass guitar, he runs Pax-Am – bad motherfucker, playing the Jersey Special, Charlie Stavish. You guys, if we were on Shark Tank right now, it would be a really easy sell if you guys knew how heavy Charlie’s bass is. But check this out. He got this other bass and it just wasn’t the same thing because that bass used to be called the Green Goblin. He got it in Japan and then he brought it home and then he changed it up and now it’s the Jersey Special. Wow, this thing legitimately weighs like three Les Paul’s. – He’s standing on this mat right now – it’s magic. I was sitting on it the other day. It’s the equivalent if you vaped out really hard and you got a brand new pair of Saucony running shoes and you were just about to leave to go running and like The West Wing came one you’re like ‘oh shit, I’ve never seen this episode.’ And you’re like ‘Why can’t life be uncomplicated like this show’ and the mat is definitely like some alien technology right now.”

“On the drums, he learned all the songs and saved the tour because our former drummer is a babyman. Two weeks before we were supposed to go on our last tour, we get this call ‘Man I don’t know. I can’t play with you guys. You guys stay up til like 11:30 and I don’t fly like that.’ Cuz he’s a fucking Golden Girl. So this bad motherfucker stepped up and learned every song in two weeks and touring the world. He’s got a fucking platinum shirt on tonight! What the fuck is that? What the fuck is that shirt?!! Everybody scream if you think that shirt’s crazy!! I said, “If you think that shirt is crazy, let me hear you scream!!!” Everyone screamed. “Adam Ficca, what is that shirt? Adams then went into a kind of Flight of the Conchords type of song about the shirt and having buttons on it. Could be an idea for another merch item.

“Take it off!” screamed a female in the crowd.
“That’s the bridge of the song right there is ‘Take it off.’ I’m not going to get involved in the taking it off part.” Then the same female yelled “I will!”
“Well, that’s our show. Thank you so much.”

“Last but not least, he just dropped in from the DMZ from the drop zone – Lieutenant Mahoney all the way from New Orleans, Ben Alleman.”

Then somehow we easily went back to the sadness of “Everybody Knows.”

One of the best moments of the evening was Adams’ version of Oasis’ “Wonderwall.” People that were casually talking throughout the show were suddenly quiet or singing along.

“We only have two songs left so I don’t have time to pretend that there’s an encore or fuck around.” With that said, Ryan Adams and the now known Unknown Band went into “New York, New York” followed by the final song of the evening, a duet with Karen Elson who opened on “Come Pick Me Up.”