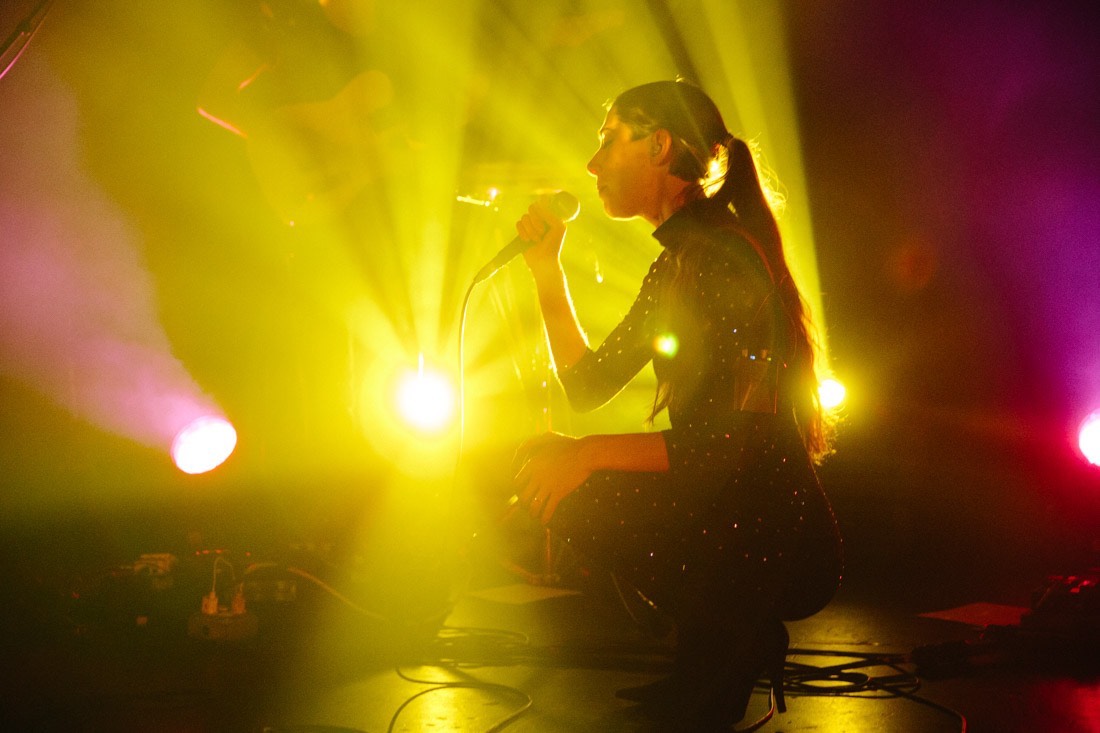 Photos by Maximilian Ho Words by Kyle B. Smith

All good things must come to an end, or so they say. Or as Caroline Polachek sings in “Cool As A Fire,” “gone with the weather, nothing lasts forever.” After a decade together, Polachek and Patrick Wimberly have decided it’s curtains for Chairlift.

Wimberly and the divine Ms. Polachek cut right to the chase in starting up “Garbage” a few seconds after assembling on stage. Polachek, who thanks to an exceedingly confident and lithe stage presence, cannot help but be the de facto beating heart of Chairlift, began the show in an austere black cloak, appearing more like a solemn Supreme Court Justice than indie darling. The glitchy, slow roast intro of “Garbage” snapped the tune out of a moody creep with a Meyer sax burst. 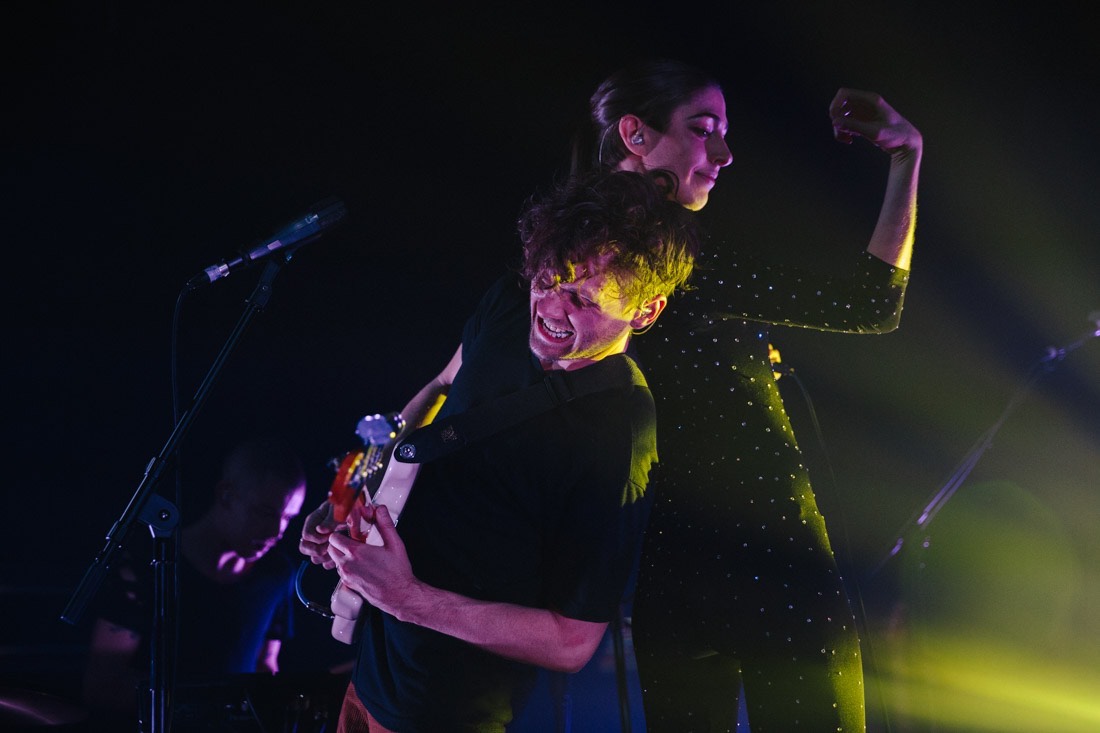 Reflection abounded throughout the course of the evening. Opener Kristin Kontrol (Dee Dee of Dum Dum Girls) spoke for many when she said plainly, “This is such a sad goodbye.” Polachek later remarked that The Echoplex was the second room that Chairlift ever played in LA. By the fourth song, “I Belong in Your Arms,” the set busted open, as Polachek symbolically doffed her robe to reveal a more celebratory sparkly black cat suit.

A trio of tracks off of Chairlift’s criminally overlooked 2016 album, Moth (their last, sigh), commenced with the slow swing of “Get Real.” Polachek’s falsetto was handled like a guitar solo, while Wimberly sat to tend to percussion under blood red lighting. “Show U Off” showed off another flawless Polacheck vocal high wire act, before the dirty breakdown in “Romeo” sound tracked a few of her karate chop dance moves. 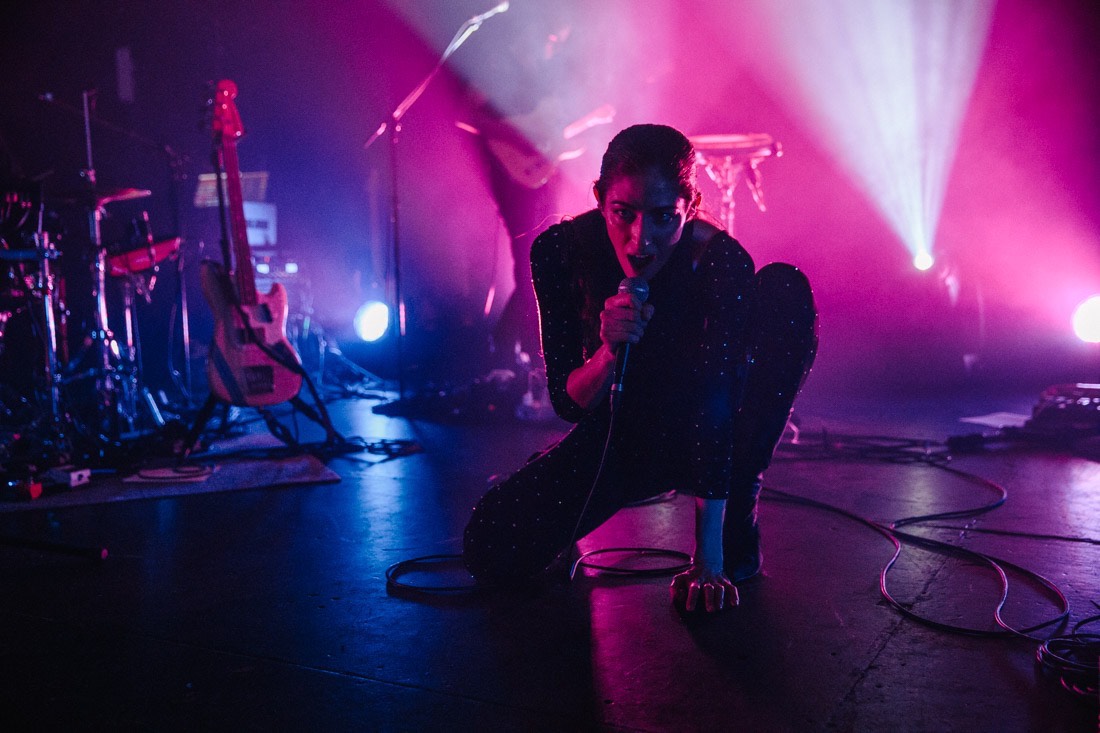 “Crying In Public” featured the versatile Wimberly now on bass, and uber-sexed up “Ch-Ching”, another Moth stand out, provided an opportunity for Polachek to flaunt her vocal stylings. What on record initially sounds like it could be some Pro Tools trickery to trim her words to remove a syllable, proved to be organic and artful phrasings that were created on the fly in the live setting. This song, above all others, suggest that Chairlift is bowing out at the top of their game. It is at once complex, playful, sordid, and dancey. At its conclusion, Wimberly and Polachek embraced, and then threatened to cry.

But there wasn’t to be any limp towards the finish line. The set closer was the stunning, ethereal “No Such Thing as Illusion,” a Moth track that Chairlift had only performed live three times previously. The spaced out percussion and negative space that give the song its buzzy soul sounded like raindrops falling in a lake on the dark side of the moon. If a song can sound like the surrender in letting go of a ten year project, it did.

A three-song encore began with “Met Before,” intentionally chosen to be performed alone by the original duo. Chairlift bid us farewell with the elastic bass sounds of “Planet Health,” and the most appropriate lyrics for a band exiting in good spirits: “We’re feeling great tonight.”