TONY CONRAD: COMPLETELY IN THE PRESENT @ THE THEATRE AT ACE HOTEL 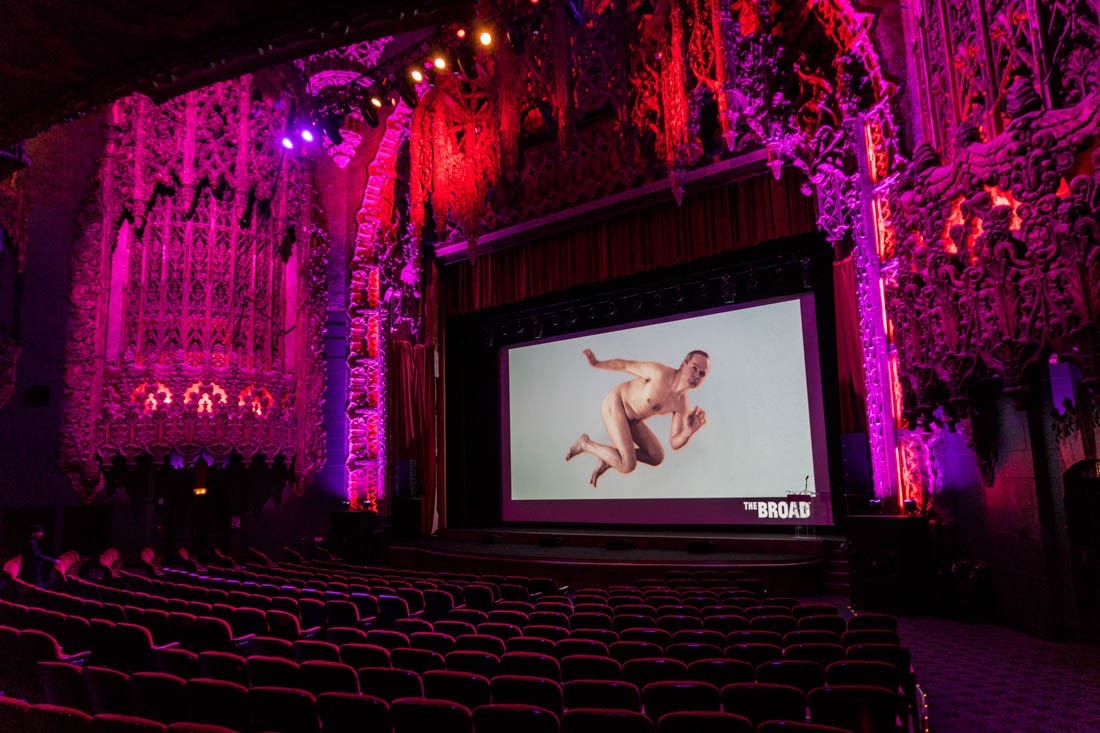 In a 2016 interview with The Guardian shortly before his death, the avant-garde visual artist, musician, and educator had this to say about his legacy: “You don’t know who I am, but somehow, indirectly, you’ve been affected by things I did.”

Judging by the turnout at The Theatre at Ace Hotel last night and the star-studded program that followed, Tony Conrad was absolutely correct. The evening began with the West Coast premiere of Tyler Hubby’s documentary, Tony Conrad: Completely in the Present, an exploration of the life and work of one of the underground’s unsung heroes.

The film paints Conrad as a largely forgotten maverick, who was there at the beginning of New York City’s underground music scene (playing violin with John Cale and La Monte Young in The Dream Syndicate, and with Cale and Lou Reed in an early version of The Velvet Underground called The Primitives). He was there at the beginning of the underground film scene (working with Jack Smith and creating his own groundbreaking films, Flicker (1966) and Yellow Movie (1973), before moving on to life as an educator and experimental visual artist. 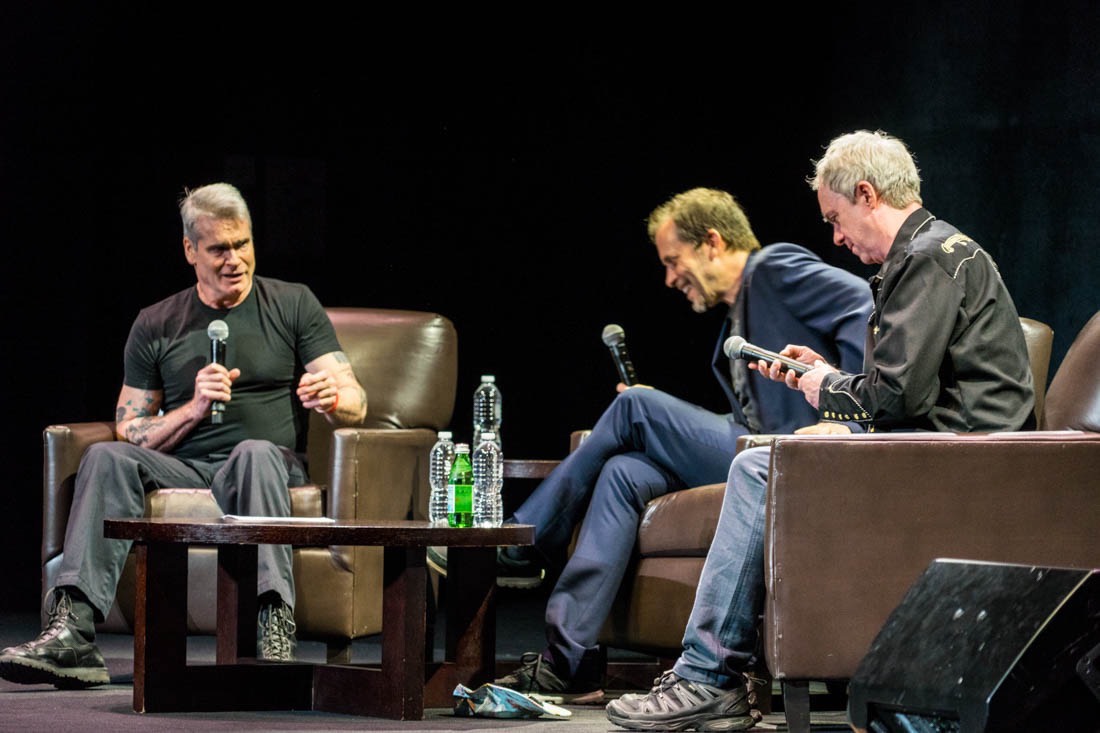 More than his work, it’s Conrad himself that’s really the star of the film. Sometimes referred to as “The Bill Murray” of the avant-garde, he comes across in on-camera interviews as goofy, dry, cuddly, and whip-smart. “I can’t stay here, it’s too depressing,” he deadpans while standing within the massive Lincoln Center, his lifelong fight against serious culture still not over. It quickly becomes clear that this man’s goal was never fame or praise. He humorously scoffs at John Cale choosing to play rock music with the Velvet Underground, but something loftier. He chased ideas, hoping to make high-art accessible to all, before abandoning it, and moving on. When discussing his signature “drone” compositions, experimental minimalist work that got him thrown into conversations with Philip Glass and John Cage, he explains, “I wanted to end composing. Get rid of it. I wanted it to die out.”

Other highlights include Conrad talking about his early days in the city, where he tried to live as “outside of the economy” as possible, living in an apartment with a monthly rent of $25.44, and eating chicken hearts which he could buy for 15 cents per pound. The footage of him powerfully swaying back and forth while playing his violin is hypnotic, while his reflections on his time as a college professor got some of the biggest laughs. “I was trying to teach people how not to do things,” he explains, anti-professional to his core. The closing scene of him out in the street, directing traffic as if conducting a symphony orchestra is moving, absurd, and endearing all at the same time. Completely In The Present is an inspiring film that any creative person or fan of the arts should see, likely to change the way you look at music, film, culture, and the creative process. 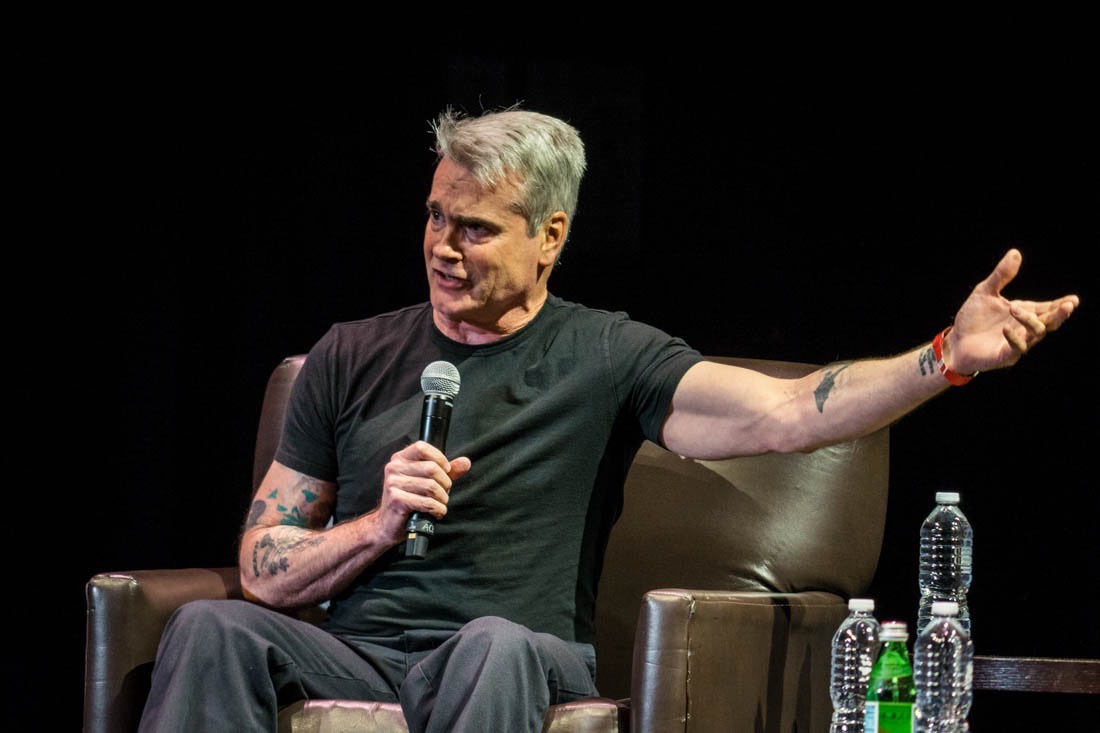 Next came a brief Q&A between musician and writer Henry Rollins, film director Tyler Hubby, and visual artist and close friend of Conrad, Tony Oursler. Rollins spoke of him like a kindred spirit, whose anti-success ethos fit right in with the punk rock world Rollins came out of with Black Flag. “The world of punk rock, if you have any kind of success, you get hate mail,” he explained, calling Conrad’s work “disruptive, but in a helpful way,” shaking us out of our everyday lives on the hamster wheel. 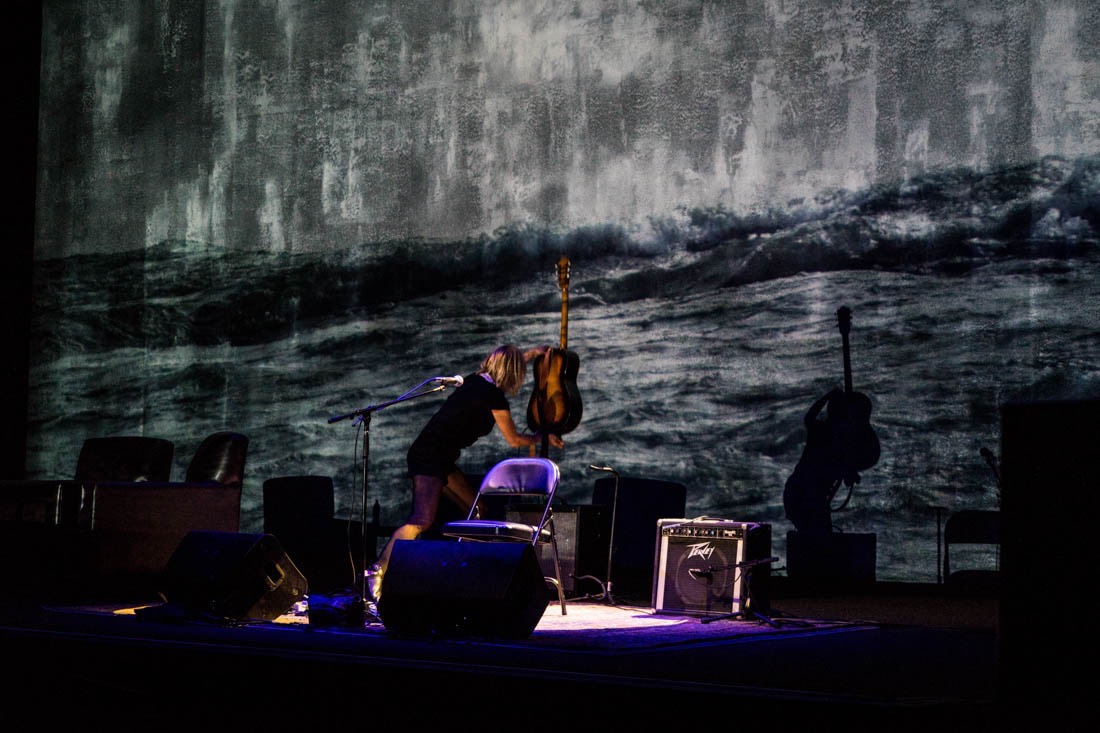 To close the evening, Oursler created a special film with footage from Niagara falls, which played as Kim Gordon of Sonic Youth took the stage. He chose the falls after a conversation he had with Gordon, saying, “There’s a very charged, powerful force, and there’s always a heavy drone, a white noise. You can’t really talk about a drone without Tony Conrad.” With her leg up on the chair, aggressively strumming, Gordon played a tribute to Conrad, a forceful, harmonic drone as footage of water ebbing, cascading over rocks played behind her. The powerful, continual noise got louder, and Gordon began rocking back and forth much like Conrad did with his violin in the documentary. As the footage changed to the full-blown falls, Gordon took her guitar off and was slowly swinging it around her amp for a long, extended feedback that lasted at least four or five minutes. As she manipulated the sound, lunging back and forth, it grew, shuddering, bucking. Within the noise, you heard infinity, interconnectedness, heaven, hell, earth, humanity. The unrelenting tones caused you to have your own experience, a major factor in Conrad’s work, bringing the night full circle.