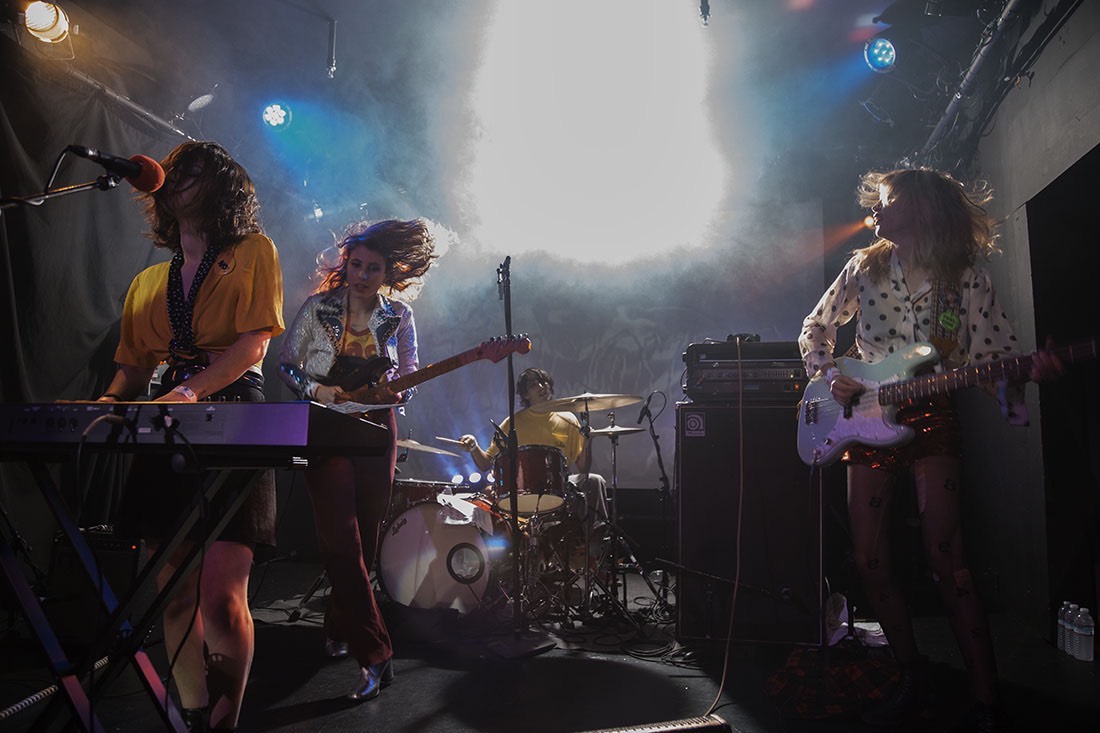 Anyone even half familiar with the L.A. underground these days must regard a lineup like the above with mind-bended anticipation. Indeed, most of the natty, good-looking crowd sloshing through The Echo’s venerable door looked pretty bent already. It was one of the first Thursday nights of the Trump administration and I got the feeling it was going to be an era of long weekends.

Shortly after nine, L.A. Drones ascended the stage to play some new music. Pretty much the house band these days at hm157, this hyperintense art-rock duo donned masks and, as Vulcanito and Tormentas Gonzales, proceeded to smoke out the house with a long synth-heavy retro-disco set, heavy on vague angst and specific desire. Damn near no one present had seen them before and all were first thunderstruck, then suddenly animated as if on marionette wires and that’s how things stayed until the Drones’ last shimmer.

The place began to fill up between sets and the smokers patio was the usual nicotine Valhalla and that’s where I found Steven Carrera of the Cigarette Bums, and we mourned the passing of dives past, many not far from this venue. Time wound pleasantly down to French Vanilla, well-loved post-punkers fronted by the delightfully frenetic Sally Spitz, who diffidently asked if we liked music before launching into a ferocious saxophone-driven din. A nervous James Chance-y energy plainly wanted to make her jump into the gathering mob but such vaudeville was unnecessary, since she did a fine job of hacking away at the Brechtian fourth wall just where she was, which was all over the stage. Truly accomplished craziness you should travel miles to see.

Up next was Egrets on Ergot, who took proccedings sharply into a 1970s glam rock direction, complete with big Bolanesque riffs, plus lewdly whooping vocals and sax licks from barefoot and coyly creeping frontman Adam Brooks. These four pretty much picked the audience up and wrung its neck. People began to dance and shout and my mind dragged me back, back, all the Proustian way back to a time of raw sugar breakfast cereal and jumping up and down to Sweet records. Programmed thus, I began to dance as well. This band’s commitment to the total rockist blitzkrieg aesthetic is a noble thing to hear in this watery pop-ridden age and the now-capacity crowd let go of them with loud reluctance.

I whiled away the short wait listening to oldies like “And Then He Kissed Me”over the PA and time thus pleasantly folded in on itself as the headliners set up. The night started out as High Art and was about to end as the T.A.M.I Show, as The Paranoyds kicked off a long set of lumbering, punkified psychedelic heaviness. Their EP Eat Their Own dropped tonight and so, after entirely unnecessary apology for lack of a saxophone, this all-female quartet set the audience to squealing and capering. The room was pretty well oiled and it took work to shoulder my way through so much slop-drunk happiness to position myself at the exit. The whole thing ended with a smash of chords, a couple of diffident goodbyes and general panting for breath. I headed out to Sunset as just as Thursday was promoted to Friday.