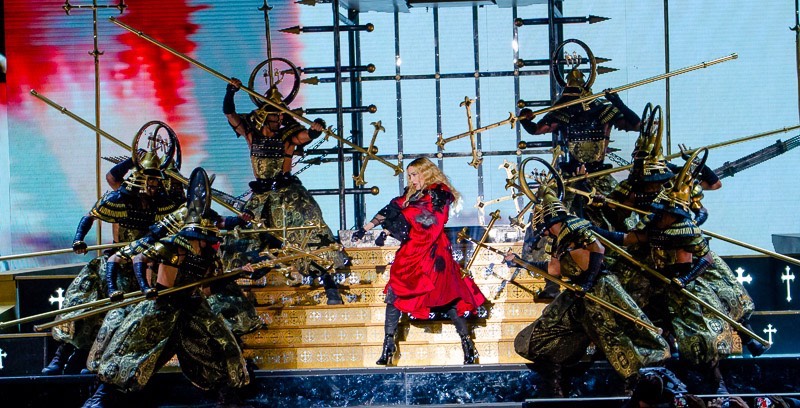 If you grew up in the 1980s, Madonna was the first woman to show you how to be a bad bitch—or in her words, an “unapologetic bitch.”

From announcing on American Bandstand that she wanted to rule the world to donning menswear to being chained to a bed to flipping numerous controversies to her advantage to changing her mind to challenging public opinion on … everything, she has spent her career refusing to pipe down and recite publicist-approved answers like a pretty pop star ought to.

So if at age 57, Madonna wants to play pretend as a singer/songwriter by hopping on a stool, strumming a ukulele and singing “La Vie en rose,” like she did during her Rebel Heart tour stop at the Forum Tuesday night, well, she said it best: “No one fucks with the queen.”

Indeed, though by starting the show an hour late, her subjects were getting sleepy—after all, they aren’t club kids anymore, either. When the show did begin, it was appropriately over-the-top and typically heavy on the appropriation: Mongolian warriors bowed as a caged, kimono-wearing Madonna was lowered to ground. As she sang “Iconic”—and though she had backing vocals, she did sing, and sounded better than she did in 1982—she also flipped over a sword like a kid hangs on the monkey bars. There were other wow moments, too. Borrowed from Mad Max: Fury Road, pole cats swung over the crowd like loosey-goosey metronomes. Wearing frilly white panties and nuns’ wimples during “Holy Water,” dancers swirled around stripper poles, and in one of the more impressive moves I’ve ever seen, one seemed to almost levitate. And Madonna’s sultry, slowed-down, 1920s-style “Music” and “Material Girl” were proof that updating old songs is not always a bad idea.

But for a performer known for her blow-the-bank arena shows, intimate moments were the most charming and successful of the night. Perhaps that’s because they were unexpected, which has always been Madonna’s favorite card to play.

In fact, the sacrilege of stripper nuns or a Last Supper recreation where Madonna’s lady parts comprised the meal felt tired. She’s already done all that. The same goes for the karate kicks that opened the show, or the far-too-literal bullfighting segment, in which “Matador Madonna” shook red capes at masked men. Wearing a traditional Mexican dress, she capped “La Isla Bonita” and a Latin-tinged rendition of “Get Into the Groove” and “Lucky Star” with, “Gracias, senors and senoritas!” and I inwardly groaned at the goofy-mom moment. (Katy Perry, who Madonna pulled up to get spanked and be toasted as the “Unapologetic Bitch of the Night,” probably meant her “Thanks, Mom!” in the Internet slang-sense … but maybe not.)

Moreover, Madonna seemed a little tired herself. Dancing hardcore choreography for two-and-a-half hours would exhaust anyone. But she seemed a bit over it, a bit like she was just going through the motions. There were clues, too: her costume change breaks dragged on longer than normal; when she sat to sing “Secret,” she said, “I’m so happy to be sitting down right now.”

I was too, because when all the shock value and cheesy fake fights were stripped away, Madonna shone. Charisma is always what separates an artist from a star, and Madonna sparkles like the entire solar system resides in her body. Dancing solo and doing signature, early-‘80s Madonna moves to “Like a Prayer,” she looked positively giddy. It was easily the most fun she, and I, had all night.

At one point, she acknowledged a fan’s request. “I know, ‘Show us your ass,’” she said, and you could almost hear her eyes rolling. “I’ve done that already.” Here’s hoping she says the same thing next time she plans a tour.