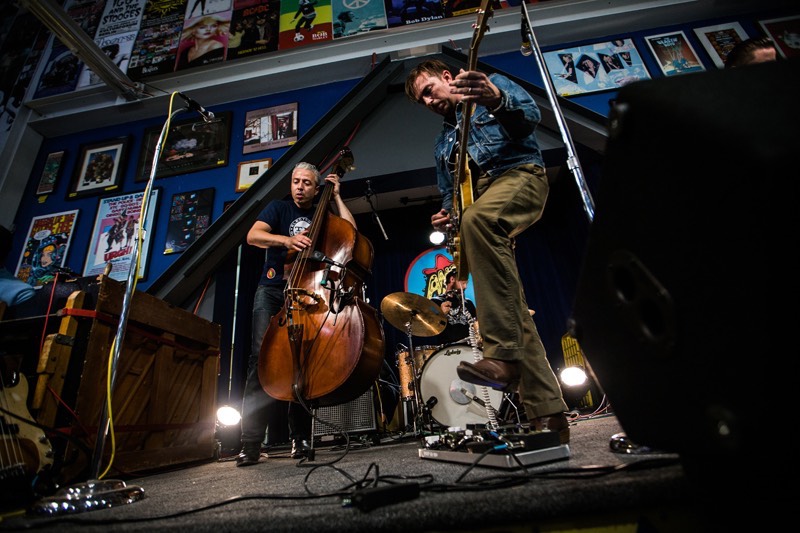 When you see an upright bass and a saxophone on stage, you just know it’s going to be a fantastic time. While most free in store performances are simply meant to whet one’s appetite, JD McPherson and band took hold of Hollywood’s Amoeba Music for nearly an hour, schooling fans and shopping patrons with timeless rock and blues.

The show marked the first time in Los Angeles to support his latest Let the Good Times Roll. It’s a damn sexy record and a long time coming. It builds upon the almost innocent fun of Signs and Signifiers with a more assured confidence. “You Must Have Met Little Caroline?” is the epitome of this, the song’s slinkiness graduating past the high school dance floor and into the after-hours clubs. With the album’s title track to the even fiercer “Bossy,” JD McPherson shook up the stage, the only gripe being there simply wasn’t enough room between the CD stacks to boogie.

Older songs like “Firebug” and “Wolf Teeth” remain smoldering live, while others became extended jams, breaking free from the time constraints of the recorded format. It was great to see McPherson and everyone be so generous with their time for a “free show,” no doubt making one fan’s long journey from England for the in store worth every mile traveled.

Get your dancing shoes ready when JD McPherson returns to headline the Twilight Concert series at the Santa Monica Pier on July 30th.