THE SONICS + BARRENCE WHITFIELD + THE TWO TENS @ THE REGENT THEATRE 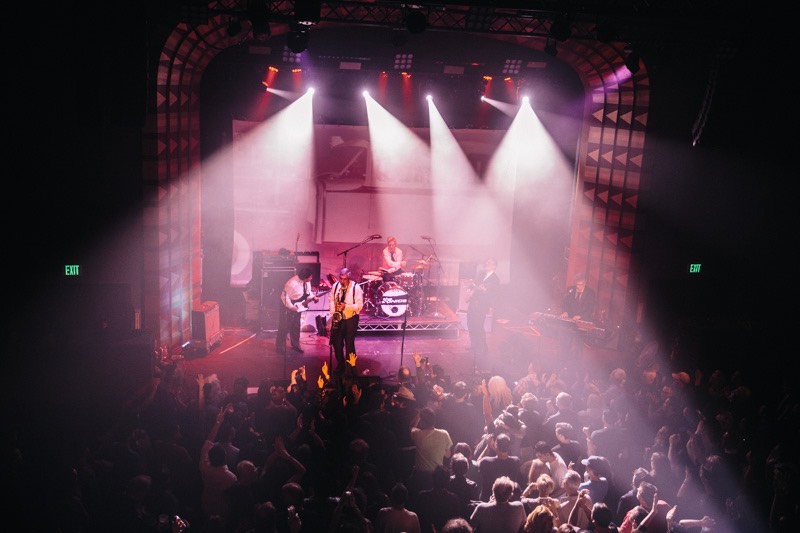 After starting the show with the foot stomping “Cinderella” the crowd erupted in cheers and hollers. Rob Lind told the crowd, “We had so much fun about last Summer when we played The Roxy. We’ve been bugging our booking agent to get us back here. They finally did it and here we are. Well you can tell from looking at us that we’re having a lot of fun up here – we always do.”

The legendary garage punk band The Sonics have a new studio album out entitled This Is The Sonics after a decades long hiatus from their last studio album. Band members Gerry Roslie (vocals/keyboard), Larry Parypa (guitar), Rob Lind (tenor sax), Freddie Dennis (vocals/bass), and Dusty Watson (drums) stopped by The Regent and played new songs along with the old favorites. During the show they invited some friends up on stage to play along. Jake Cavaliere from “The Lords of Altamont” sang vocals on “He’s Waitin’” and MC5 (Motor City 5) guitarist Wayne Kramer shared guitar parts with Parypa on “Louie Louie”. When it came time to play “Strychnine,” Watson relinquished his drum set to The Two Tens drummer Rikki Styxx who also happens to be his wife. Lind also had the front row sing along to the verses. Fans of garage rock got to see the originators of the genre write a new chapter in their revived musical careers.

Boston R&B soul-singer Barrence Whitfield started off his set wearing shades and a King Tut headdress. Whitfield, who is also on the comeback trail, belted out several tunes for the crowd and did so with plenty of flair and excitement. He howled and wailed his way through “I’m Sad About It” and his bandmates delivered plenty of groove while playing “Hangman’s Token.”

LA’s own garage punk band The Two Tens started the party. The duo, comprised of Adam Bones (vocals/guitars) and Styxx (drums) put on an intensely raw performance, which included their catchy song “Dreams.”