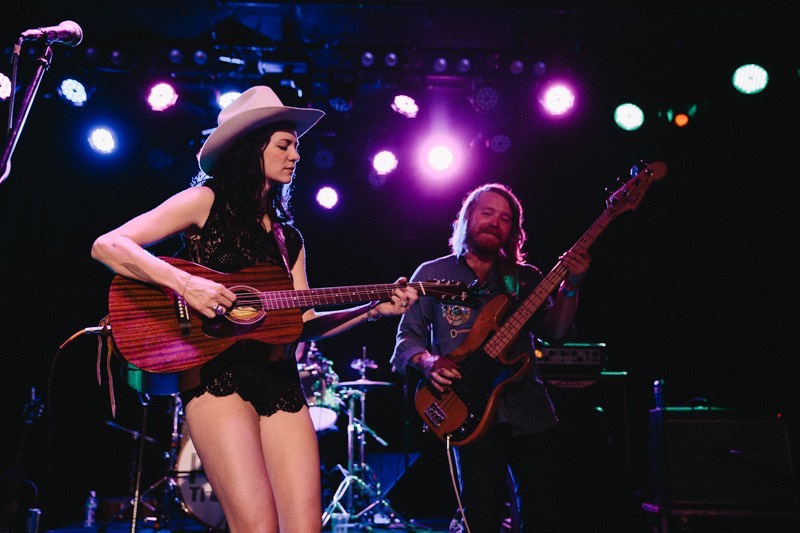 “Ok, yeah—let’s talk about rednecks. Are there any in California? Well, not really. Well, I’m from Greenville, South Carolina, and there’s a shit-ton of rednecks. Kelly, what do you say? That’s my childhood best friend right there—she knows that we’re straight-up white trash hiding out in Los Angeles. Sorry, Kelly—I didn’t mean to rat you out.”

Fresh off her appearance at this year’s Stagecoach Country Music Festival, sassy and brassy Nikki Lane stopped by The Roxy to headline Hollywood Palomino Night and brought along a few of this year’s Stagecoach performers. The Country Outlaw charmingly recounted the stories that inspired her songs. The witty and acerbic lyrics to “Man Up” were inspired by divorce. “Gone, Gone, Gone” was about an ex-boyfriend who later became a bank robber. Lane’s set was a bit off-the-cuff as she took requests for songs and invited her friends to play on stage. She ended the night with a Bob Dylan cover “You Ain’t Goin’ Nowhere” and invited Stagecoach performer Caitlin Rose to sing alongside her. All Or Nothin’ is worthy of your attention.

Canadian country musician Daniel Romano almost didn’t make it to the show due to car troubles while in Indio. Fortunately he made it in time to play the sweet melodies of “The One That Got Away (Came Back Today).” Romano has a lot on his plate for 2015 with two albums scheduled for release and a healthy amount of touring.

The country Canadians kept coming with Lindi Ortega who sang a few of her songs, including the poetic “Tin Star” which is an ode to the struggling musicians out there. Her album Faded Gloryville is due for release this summer.

With just an acoustic guitar in hand and his rich voice, folk music singer-songwriter John Moreland started everything. The crowd heard some serious fingerpicking skills throughout the set and also heard his soulfully melancholic performance of “Break My Heart Sweetly.”