JEFF the Brotherhood rocked our city in September of last year, it was at The Echo and it was madness. Moshing, sweat, and a wizard." /> L.A. Record
Menu 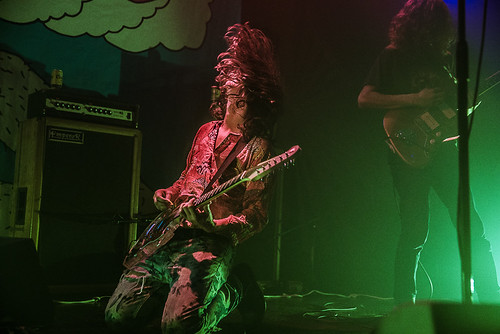 The last time JEFF the Brotherhood rocked our city in September of last year, it was at The Echo and it was madness. Moshing, sweat, and a wizard. This time around, the Nashville guys took over The Troubadour, but to a crowd that was paying a little more attention to the music and was more into the rhythm of tunes from their latest Wasted on the Dream by swaying and head banging. On the eve before playing Burgerama IV, Jake Orrall and Jamin Orrall, along with touring members Kunal Prakash and Chet Jameson brought some heavy 70s sounds, including a cover of Neil Young’s “Cinnamon Girl.” The crowd wouldn’t let them get away without an encore and yelled and clapped until they came back downstairs for some more love.

Although their album Feels Like won’t be out until June 23rd, Bully have been gathering fans. It was the bands second time to LA and Alicia Bognanno unfortunately received a jaywalking ticket. Boo. But the weather and supportive fans will surely bring the Nashville band back soon.

LA’s Lovely Bad Things got things rocking early with friends in the crowd to cheer them on.