Palma Violets had the Echo packed once again as hair, sweat and love all flowed. " /> L.A. Record
Menu

PALMA VIOLETS + NO PARENTS @ THE ECHO 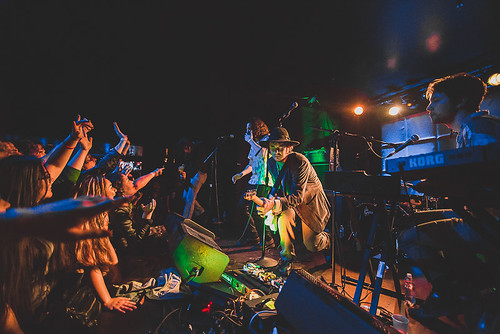 They are back! London’s Palma Violets had the Echo packed once again as hair, sweat and love all flowed. The guys played almost every song from 2013’s 180, including “Rattlesnake Highway” and “Chicken Dipper” and a few from their latest baby Danger in the Club. Samuel Thomas Fryer (vox/guitar), Alexander “Chilli” Jesson (vox/bass), Jeffrey Peter Mayhew (keyboards) and William Martin Doyle (drums) are as tight as ever, songs are strong and their energy is at 110%. Palma Violets is about to embark on some more US dates which don’t include LA area, but you can catch them at Burgerama this weekend!
And speaking of the insane Burgerama lineup, our own No Parents will be there as well and might get completely naked. “Die Hippie Die” sent the crowd flying and that didn’t stop until the music was over.