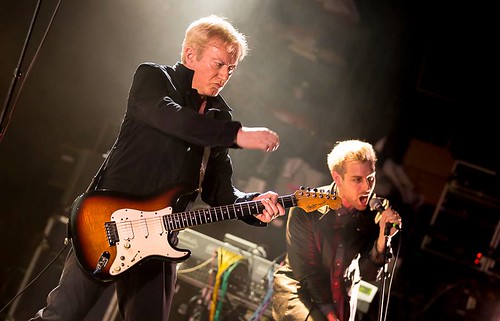 Photos and words by Debi Del Grande
The mere presence of guitarist Andy Gill on stage is truly captivating. Whether it be his stare, movement, his truly fine guitar playing or all of the aforementioned, the last original member of Gang of Four is keeping the music alive and moving forward. Not an easy task considering original vocalist Jon King left the band to concentrate on other endeavors. Vocalist John “Gaoler” Sterry has some big shoes to fill, but from the reaction last night at the El Rey Theatre, the music conquered. Longtime bassist Thomas McNiece was smooth and the newest addition, drummer Jonny Finnegan kept it all together. The guys played songs from their brand new album What Happens Next and some long time favorites. We all just became a gang of 775 at the packed venue. They are not to be missed if you are attending Burgerama on Saturday.
New Yorkers Public Access T.V. preceded.