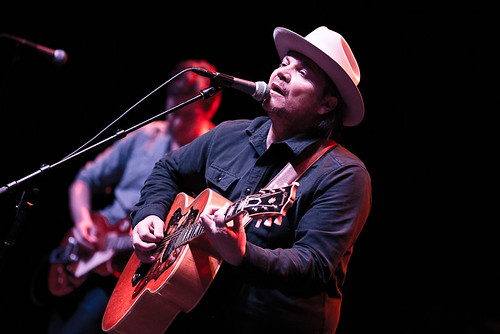 “Pretty incredible room. It’s so beautiful, people seem a little bit hesitant to even enter it.” Jeff Tweedy (Wilco/Uncle Tupelo) wasn’t kidding. Tweedy and his son Spencer on drums came to the stage with the talents of Jeff’s childhood friend Darin Gray on bass, Jim Elkington on guitar, and Liam Cunningham on keyboards. They started playing “Hazel” from the album Sukierae. Either the crowd in the lobby wasn’t informed that the show had started or fans were too busy socializing because after the first song, Tweedy asked if that was house music still playing (it was) and it felt like a Laker game. So they played “Hazel” again. And slowly, people started the walk of shame into the beautiful room and took their seats.

The crowd was there early enough though to learn that Shirley Temple got her first period at the theatre. Tweedy, was joking of course, but these are the kind of facts people tell you in this town.

“This is a diverse audience. Looking out, I see a woman asleep and a man standing.” Tweedy told us he was a hit at an adult day care center where a few can fall asleep. They have trouble sleeping and Tweedy can help. He really does have quite the soothing voice and only good dreams could come if you happen to fall asleep. Aside from the one woman, no one appeared to have fallen asleep. In fact, fans were pretty vocal and clapped at odd times. During the second portion of the show, Tweedy played Wilco songs and shouts came from all over the venue for favorites to which he replied “You’re scaring me. You’re so angry!”

Tweedy thanked his wife Susie who was in the audience. Before playing “I’m The Man Who Loves You,” he said “This is dedicated to her as it is every night, whether she’s in the audience or not. She’s the most badass woman alive. I’m going to dedicate this to my son Sammy who is also here tonight. My son’s badass too. But you don’t have to be badass for me to love you – but it helps alot.” Susie is pretty badass as she is kicking lymphoma’s ass.

There were many many highlights, including “Diamond Light Pt. 1,” “Nobody Dies Anymore” and “Misunderstood.”

Fred Armisen came out to introduce opener Eleanor Friedberger who just played The Echo a few weeks ago.