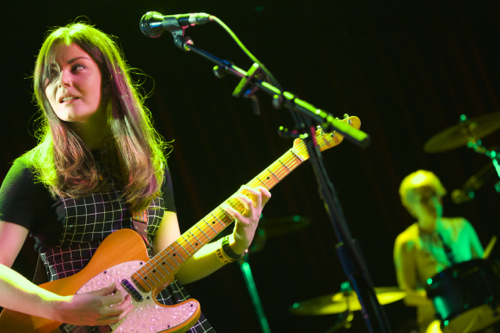 Photos and words by Cortney Armitage
Scottish-based duo Honeyblood brought us some catchy tunes from their self-titled album out on FatCat Records, including “Choker” and “Super Rat.” Stina Marie Claire Tweeddale (vox/guitar) and drummer Cat Myers (she replaced Shona McVicar) make powerful sounds with a minimal setup. Tweeddale’s voice filled their dark introspective punk with a beautiful anger and a dash of ethereal mischief. As Tweeddale danced around on stage, she pulled her chord from her guitar in the middle of a track and fumbled for a few eight counts to get it back in. Like the best friend you always wanted, Myers kept the beat and patiently waited for Tweeddale to get back into the song. When the song had finished, Tweeddale thanked Myers for covering for her. Myers quickly retorted back, with a smile on her face, “I don’t think anyone noticed.” The best part was – it wasn’t just Myers who had Tweeddale’s back. By this point, the crowd had Honeyblood’s back and cheered along.
Under the pink and green lights, hometown boys Golden Daze used psychedelic pop and sweet harmonies to set the right vibe for the night. 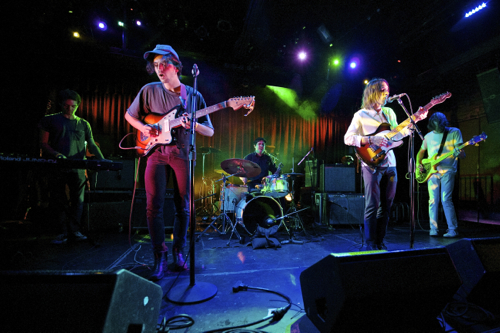