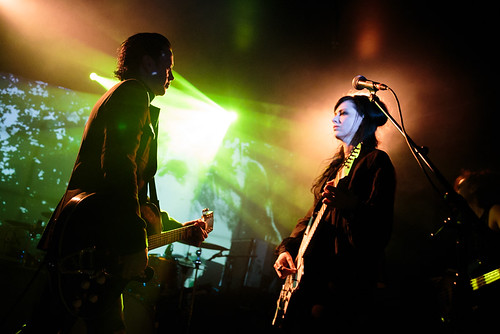 Photos and words by Debi Del Grande
It was a big tease to hear Aimee Nash and Scott Von Ryper play at George Fest last year. It has been so long. Luckily, The Black Ryder are now officially back on tour with their brand new album The Door Behind the Door that is filled with ethereal soundscapes one can get completely lost in. For their second night celebrating its release – fans, friends and a few fellow “Black” musicians packed The Echo. Although Nash and Von Ryper are the two official members, Nash mentioned Nicole Emery is the secret weapon as she plays bass, guitar and sings like an angel. Graham Roby keeps it all together on drums. The artwork on the projections was provided by their friend, the crowd swayed, rocked and wanted more.
Vinyl Williams and Slow White preceded.