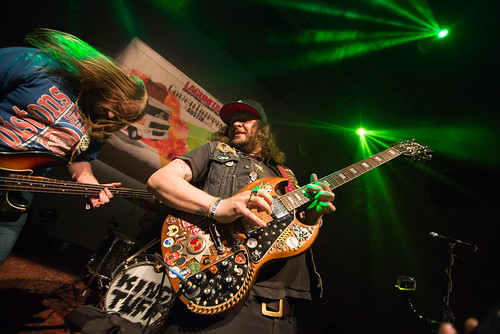 Photos and words by Debi Del Grande
People don’t mind spilling beer in a mosh pit when it’s free! The Lagunitas Brewing Company presented CouchTrippin’ with King Tuff and Sonny & the Sunsets at the beautiful Mark Sennett Studios. There was Live Art by Raudiel Sanudo, and O+ FESTIVAL along with the always surprising Freaktacular Entertainment and free beer. Lots of it.
Sonny & the Sunsets kicked off the live music and played a brand new tune about filling out “Applications.” See the jam-in-the-van vid below. Although most were grooving to the surfing beats, one guy in the very front felt the need to look at down at his phone through most of the set. Until Sonny took it from him and put it in his pocket until the set was finished. Well done Sonny.
Nothing will put a smile on your face quicker than when Kyle Thomas, Magic Jake, and Garett Goddard walk out on stage. You know it’s going to get rocking. Things were pretty much a blur with hair, beer and a plastic couch in the air. The crowd may have been 21+, but no one could stand still. It was almost like we were in a bounce house. It was fantastic.