PHOTOS: AN EVENING WITH THE CHURCH @ THE EL REY THEATRE 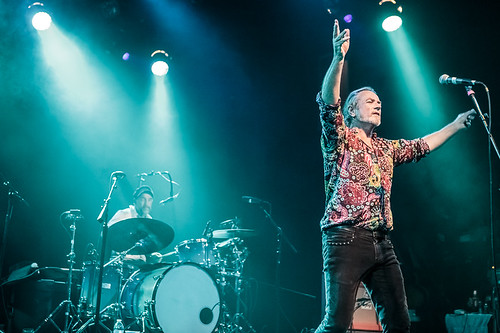 Photos and words by Scott Sheff

After a four years, Australia’s The Church returned to the The El Rey Theatre in support of its 25th studio album Further/Deeper.

Different this go-around for the 35-year-veterans, was the addition of Powderfinger guitarist Ian Haug, who replaced original guitarist Marty Wilson-Piper in 2013. Despite the loss, Haug brought a new sense of energy to the band and it showed on this evening, with the group diving into some intense jams to close out each of its two sets and encore. Unchanged and unwavering were original members Steve Kilbey’s distinct vocals, Peter Koppes’ guitar finesse and music that set them apart.

The evening concluded on a high-note, with fan-favorite “Under the Milky Way” and an extended jam of “Miami” to close out the second set. The band returned to the stage for a two-song encore, ending with a feverish rendition of another crowd-pleaser “Reptile” off its 1988 album Starfish.