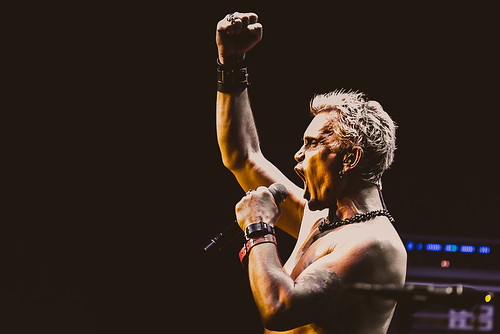 They can finally sleep in their own beds. Billy Idol and his partners-in-crime, which include the extraordinary guitarist Steve Stevens and local favorite Billy Morrison, played their final evening of the Kings and Queens of the Underground American/Canadian tour, winding up at the sold out Observatory. After two sold out nights at The Wiltern and a Vegas trip, the guys held nothing back in Santa Ana.

Things really kicked into high gear when Stevens lit a cigarette and strolled to the edge of the stage to start those memorable sounds for “Flesh for Fantasy.” Noodles of Offspring made a special appearance for “Ready Steady Go,” and Idol really shined on acoustic for “Sweet Sixteen.” The mega hits like “Rebel Yell” and “White Wedding” had the band at full throttle with everyone’s fists in the air.

At the end of shows, it’s usually the techs that hand out setlists, picks, drumsticks, etc. Not at a Billy Idol show. Not only does he do meet and greets, he personally handed out setlists and drumsticks and signed an abundance of items handed to him from the front row, showing fans his appreciation. Billy Idol heads over to Oz next month.

“I’ve got a psychiatrist for you” stated singer/guitarist Ryan Lindsey as the crowd started getting into “Pyschiatrist.” It’s not easy being a support band when the headliner has diehard fans who can’t wait for them to take the stage. But BRONCHO did alright for themselves. Overheard in the crowd – “He reminds me of that kid in Breaking Bad.” BRONCHO is touring through the beginning of April, but they will be at Burgerama.