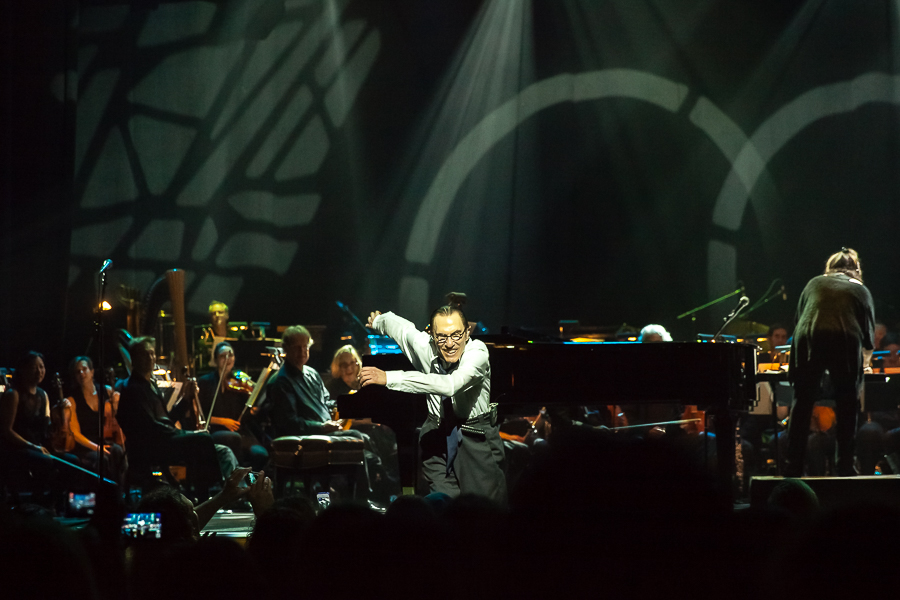 Photos and words by David Valera

Diehard fans wearing kimonos with silver hi-tops, young 20-something hipsters mixed in with older, artsy theatre goers made for a diverse and eclectic crowd for the Sparks second show at the beautiful Theatre at Ace Hotel. Brothers Russell and Ron Mael, founding members of Sparks, performed their 1974 album Kimono My House in its entirety February 14th and 15th. The duo was accompanied by Suzie Katayama (L.A. Philharmonic), backed by a 38-piece orchestra and arranged by Nathan Kelly.

The Maels certainly don’t rest on their 40 decades of accomplishments. Songs like “This Town Ain’t Big Enough for the Both of Us” were completely reworked and played through the enormously layered sounds of the orchestra. Along with Russell’s falsetto theatrics, the music took on a higher level of sonics and filled the gothic walls of the theatre. Were we witnessing an orchestrated musical, live theatre, a rock show, or an opera? All of the above and so much more.

After the intermission, Sparks started off with “The Rhythm Thief” as the second half was an assortment of songs from their many albums. Ron took a break from the piano, stood in the spotlight by himself and recited the words from “I Am Ingmar Bergman” then announced they are continuing with the feature film project The Seduction of Ingmar Bergman directed by Guy Maddin.

The big surprise of the night was an appearance of Franz Ferdinand’s Alex Kapranos performing a duet on “When Do I Get to Sing ‘My Way'”. After the song and a few hugs from the brothers, Russell announced they have collaborated on an album and will tour with Franz Ferdinand in Europe this Summer, with plans for some U.S. dates in the works.

Setlist:
This Town Ain’t Big Enough for the Both of Us
Amateur Hour
Falling in Love With Myself Again
Here in Heaven
Thank God It’s Not Christmas
Hasta Mañana, Monsieur
Talent Is an Asset
Complaints
In My Family
Equator
(Intermission)
The Rhythm Thief
Get in the Swing
Let the Monkey Drive
Looks, Looks, Looks
Pulling Rabbits Out of a Hat
I Am Ingmar Bergman
Oh My God
Dick Around
When Do I Get to Sing “My Way”
The Number One Song in Heaven
Encore:
Change