PHOTOS: THE GROWLERS @ THE HOLLYWOOD PALLADIUM 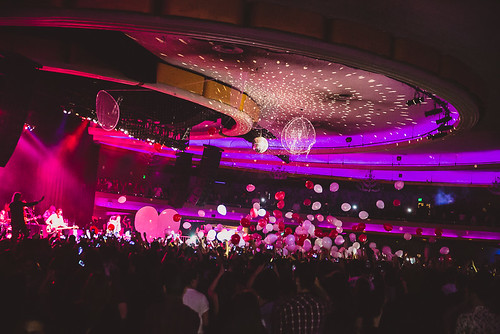 They did it! The Growlers sold out The Hollywood Palladium and on Valentine’s Day. And if you know The Growlers from their Beach Goth soirees, they go all out on detailed decorations. They made it a special V-Day for lovers, singles and swingers alike. Greeting concert attendees were Lucille Ball, Marilyn Monroe, Charlie Chaplin, and Dorothy and Toto. Two huge cutout hearts bookended the stage where DJ Jim cranked his vintage record player and gathered fans of his own.

Introducing the band, was Howard Cosell complete with his Wide World of Sports jacket. When the band took the stage, everyone started moving and grooving and never stopped throughout the set. Shannon Shaw of Shannon and the Clams made a special appearance and made her way from the back of the venue to the stage. Balloons were released towards the end as love lingered in the air.