PHOTOS: WARPAINT + VS COLOUR @ THE ROXY 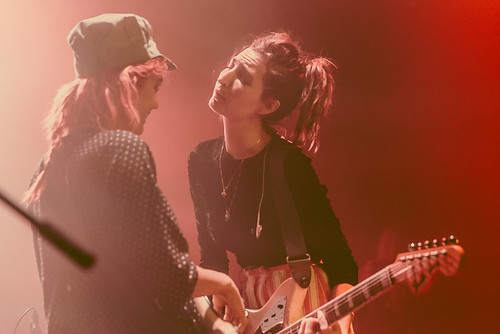 Photos and words by Debi Del Grande
Just when we thought it would be awhile before we heard Warpaint live after the mesmerizing Echoplex show back in early November, we were bestowed with another live show at The Roxy. Diehards were lined up early to be up close to their favorite band once more. The set was strong as Emily, Jenny Lee, Theresa and Stella blended their musical talents to form sounds the crowd swayed to. Fans in the front screamed and professed their love. Early in the set, Theresa Wayman did a quick crowd surf and it became like a big family party. Warpaint created an atmosphere with dreamy and vibey beats under the hazy lights. The crowd, of course, threw back as much energy as the band gave.
Don’t miss them at Fais Do-Do on February 28th for a special show raising money for Youth in Rock for John Marshall High School.
Supporting local band VS Colour started the grooves.