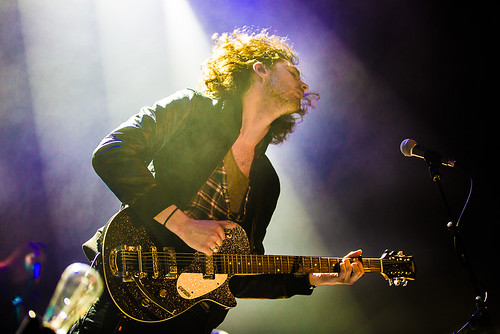 Andrew Hozier-Byrne known mononymously as Hozier, is having quite the year already. With the huge hit “Take Me to Church,” most know his name by now. Pretty girls adorned the front rail waiting for the Irishman to appear at the sold out Fonda Theatre. Hozier brought a little taste of Bray, County Wicklow with him as he and his talented band serenaded us with beautiful music throughout the evening. The venue was at full capacity and the fans made Hozier blush as the applause was deafening. He appeared a bit overwhelmed by all the excitement, even during “Angel of Small Death and the Codeine Scene,” a song about death. It was invigorating to hear him sing live, watch his guitar skills and play a full set of songs, including “Cherry Wine” and “Run” during the encore.
At the end of the evening, he gave a shout out to a young boy named Tate who was standing in the front. Tate was in the video “From Eden” (see below).

Setlist:
Angel of Small Death and the Codeine Scene
From Eden
Jackie and Wilson
Someone New
Sedated
It Will Come Back
In a Week (with Alana Henderson)
Illinois Blues (Skip James cover)
Like Real People Do
Arsonist’s Lullabye
To Be Alone
Foreigner’s God
Take Me to Church
Encore:
Cherry Wine
Run
1 Thing (Amerie cover)
Work Song