PHOTOS: CAGE THE ELEPHANT + THE BLACK AND THE WHITE @ THE TOWER THEATRE 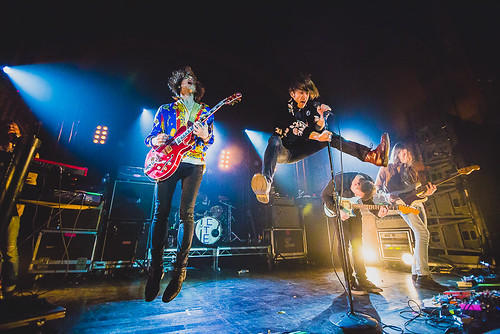 Photos and words by Debi Del Grande
When Grammy week rolls around, live music is everywhere at almost every venue in LA. Nominated for best alternative music album, Cage the Elephant seized the city this week by doing various radio spots, Sonos Studio appearance, Conan, a show at The Observatory and two sold out shows at the downtown Tower Theatre. Fans were lined up in the wee hours Thursday morning waiting for their Southern rockers. The connection that Matthew “Matt” Shultz (lead vox), Brad “Dave” Shultz (rhythm guitar), Jared Champion (drums/percussion), Daniel “Tich” Tichenor (bass guitar/backing vox), Matthan Minster (keyboards/guitar/backing vox), and Nick Bockrath (lead guitar) have with the crowd is exceptional, intense, and fun. Fans constantly reached out to touch them – the band constantly reached back by jumping in the crowd while playing. Not many bands these days have more than one hit, if that. “Ain’t No Rest For the Wicked,” “Come a Little Closer,” “Back Against the Wall,” and the more recent “Cigarette Daydreams” from Melophobia are all familiar. With relatable lyrics, Cage is constantly played on the radio, but at the same time, are able keep off the heavy mainstream path. They may be a little more polished these days, but have the gritty rocking pulse the fans crave, especially at their live shows.
Locals The Black and The White had the venue pumping before CTE took the stage and the restless fans appeared to be more than ok with this.