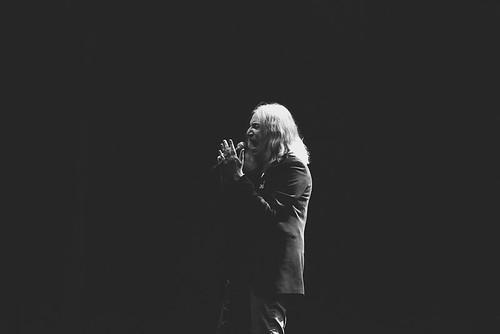 It seems to come so naturally for Patti Smith. Her way with words. How she sings them, presents them, feels them, and probably more importantly, communicates them and reaches people. No surprise she sold out two shows at The Theatre at Ace Hotel that had almost everyone standing near the front or in the aisles in lieu of sitting down.

If you have never seen Patti Smith live, it is a very special treat. Each song is a true gem and has a story that she shares with the audience. Through constant shouts of “I love you Patti” to an obnoxious guy rudely talking (prompting Smith to say “Shut the Fuck Up!”), it is hard for fans to contain their admiration for the talented one.

During the second evening at the beautiful theatre, Smith had a clever way of weaving her lyrics to “Distant Fingers” to incorporate Dr. Who’s David Tennant. From the beautiful “This is the Girl” a song for Amy Winehouse to the cover of Nirvana’s “Smells Like Teen Spirit” to a dedication of “Pissing in a River” for her good friend Johnny Depp, each song had its own special moments that only Smith can deliver. No matter if she’s sung the song thousands of times (like “Free Money”), it’s as though it’s the first time – she feels it, it’s honest and her guts are about to spill out.

One song that really stood out was a cover of “The Stable Song” by Gregory Alan Isakov. She explained she found the song accidentally on “the Youtube” while looking for Christmas songs like “Away in the Manger.” When she came across “The Stable Song,” she thought it might be a nice little song about the Baby Jesus and it wasn’t.

She sat on stage and watched her band from the front as the fans couldn’t believe it was happening. They could touch her if they dared. It is truly evident Smith loves her band and vice versa. This coming November, marks the 40th anniversary of her first album Horses. While Lenny Kaye (who has been with her for 45 years) was tuning his guitar, she mentioned how proud she was of all the members of her band – drummer Jay Dee Daugherty 40 years, bassist Tony Shanahan 27 years, and youngster Jack Petruzzelli on guitar. Patrick Wolf also played with the band this evening.

“Even if David Tennant calls me, this one is for you Fred.” And the 1978 song about Fred “Sonic” Smith, “Because the Night” drove fans over the edge as she belted out the words.

“I hope you have a really great weekend. I almost got the chance to do the thing on halftime on Super Bowl Sunday, but they said I didn’t have enough outfits.”

If you are going to the Patti Smith show at The Roxy on Monday, you are damn lucky.