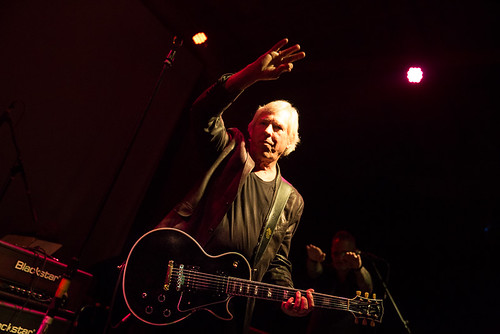 Photos and words by Debi Del Grande
What a night (and early morning) at The Bootleg Hifi as The Stooges’ guitarist James Williamson played his solo album Re-Licked which is comprised of rare 70s Stooges’ songs that have never been properly released. The accomplished guitarist played the entire set as quite the array of established musicians shared vocal duties and had their Iggy Pop moment.
Like a bucking horse out the gate, Jello Biafra started everything off with “Head on the Curve.” Other contributors to the album that shined on stage were Joe Cardamore of The Icarus Line, Alison Mosshart of The Kills/Dead Weather and Lisa Kekaula who really fired things up. Williamson’s band may not have recognizable names, but they held their own.
Cheetah Chrome (The Dead Boys) featuring The Streetwalkin’ Cheetahs and The Richmond Sluts got the party started and continued through the main set.