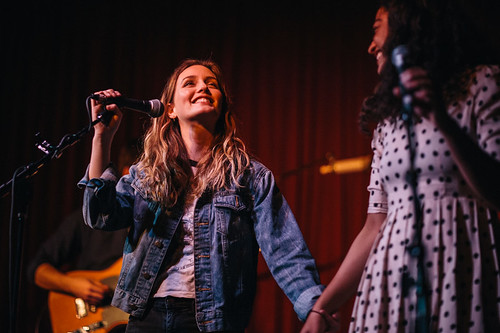 Photos and words by Maximilian Ho
The multi-talented Leighton Meester kicked off the first of three shows of her Hotel Café residency with “Good for One Thing” to a packed audience as Meester’s soothing songs filled the intimate room. Last fall Meester released her debut LP Heartstrings, which is a mix of Americana and folk music. Towards the end of the set, Meester invited her friend and opening act Dana Williams on stage to perform their rendition of Fleetwood Mac’s “Dreams.” Meester ended the set playing” Blue Afternoon,” but the audience was hungry for more and demanded one more song. It seemed evident that Meester had not planned on veering off the setlist as she admits “We’re really looking for another song.” After fielding requests and conferring with her bandmates, “Entitled” was the winner. Leighton Meester will be playing 1/13 and 1/27 at The Hotel Café.

Los Angeles based singer-songwriter Dana Williams opened up the show for the night. Williams played a few songs including “Heart’s Your Home”, “One More”, and ” Keep Me Waiting” off her EP The Lonely One. If her name sounds familiar, it’s because she appeared as a contestant on last year’s season of ABC’s Rising Star. While she didn’t win the competition, she came pretty close to winning and she definitely impressed the judges with her performances. Recently she was featured in a holiday-themed Apple commercial. You can catch this rising star again at Meester’s next residency show.