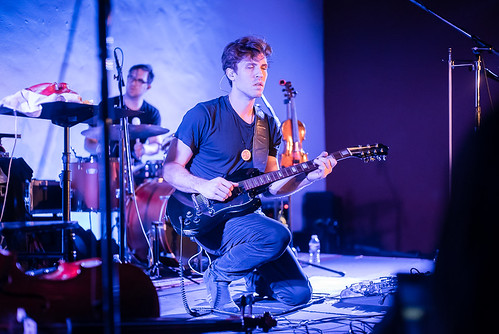 Photos and words by David Valera
Classically trained musician Matthew Hemerlein, a.k.a. Lo-Fang, performed his debut album Blue Film in the historic Masonic Lodge at The Hollywood Forever Cemetery.
Hemerlein, the multi-instrumentalist (violin/cello/guitar), and looping artist started off his set on stage alone with his gorgeously soulful and mesmerizing vocals. A hypnotic trance fell over the wide-eyed crowd who appeared to enjoy every nuance of the melodies. Lo-Fang’s haunting reinterpretation of “The One That I Want,” recently gone viral in Baz Luhrmann’s mini-film for Chanel, transported the fans into their own dream state. A hushed silence fell upon the subtly-lit hall during a beautiful rendition of “Look Away.”
Hemerlein woke the crowd out of their drone-like state by bringing out his drummer and guitarist and got more animated while gyrating to “Animal Urges.” Fans in the crowd yelled, “Take off your shirt!”
to which Hemerlein responded “You take off your shirt.” Hemerlein performed without shoes, so fans then yelled out “Take off your socks!”
Special guest Milosh from Rhye was invited on stage to perform a falsetto duet.
A limited collection of “Acid” t-shirts, hand painted by Hemerlein, were offered for sale and were quickly swept up by Lo-Fang fans.